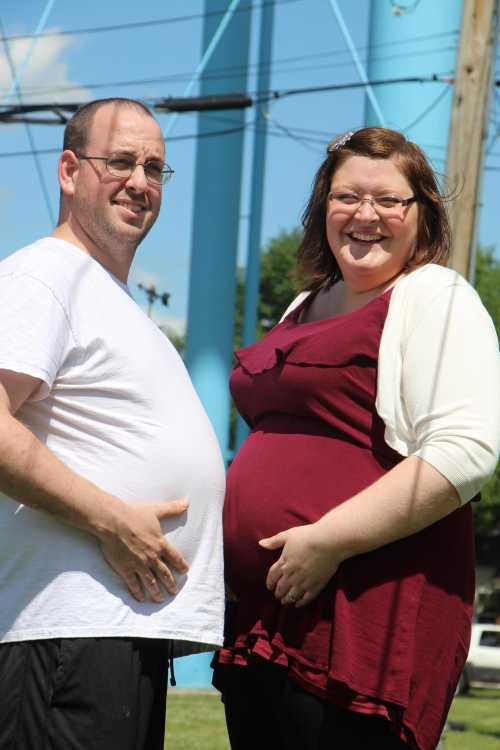 Food baby and real baby. Can you guess which is which?

I always thought it was a big joke about how emotional pregnant women are. Don’t get me wrong, even before I got pregnant, I cried some undue tears. But in the last month or so? Geez.

Early in my pregnancy, I was too focused on getting through the day without vomiting in public. I came close a few times, but somehow managed to successfully make it through that aspect.

At 6 1/2 months pregnant, my body has taken a turn against me: So many tears.

I’m going to be honest here, most of the time I pretty much just cry about food.

I wish I was kidding.

A couple of months ago I found out I was having issues with my fasting glucose levels. In order to combat the issue, my doctor told me to keep an eye on my carb intake, which then turned into spending several hours with a dietitian to set the amount of carbs right just for me in hopes of getting that number down in the morning for the sake of myself and my baby.

Well, the first trip to the store after talking with the dietitian was a disaster. Do you know how many carbs are in the good stuff? Like, a lot. For a pregnant woman who just recently got an actual appetite and started getting cravings, it hasn’t been fun.

Logan and I made our way down the cereal aisle to see what I could have for a quick breakfast, and basically the answer was nothing. I cried in the middle of the aisle looking at the nutrition chart on the side of a box of Cheerios, and proceeded to cry for another half hour through lunch.

I have to give my husband props though. He just held my hand and let me cry it out. He also spent the rest of the day following me around to make sure nothing else set me off. I’m one of those people who if you ask me what is wrong, it just makes everything 10 times worse.

Last weekend, we made a trip to Terre Haute to pick up some baby clothes for Cici. As most things do these days, the shopping trip made me hungry, so we went out to eat. Keep in mind, I’m very worried about the health of my daughter, so I have been following my diet plan pretty strictly. I know how much of a potato and a pile of corn I can have before I have reached my max carb intake for the meal.

I had a steak, potato and corn for lunch that day, and it was delicious. While sitting at the table and having a conversation with my husband about someone I had been worried about, I got quiet. Logan knows that is never good.

He tried to get me to talk about what was wrong, and my reply was, “Ugh. It’s stupid.”

After a little more prying, I finally told him I realllllyyyy just wanted to finish my potato and corn but was trying to continue following my plan. The look on his face was priceless. He thought I was in the midst of some existential crisis, trying to figure out how to give someone a reality check, but all I really wanted was more food.

I have to admit, I felt much better after laughing at him for caring so much.

I’ve also found myself to be a little extra catty lately. To the point someone’s voice was getting on my nerves. But, when she told me I looked pretty that day, I realized I needed to chill.

So, I write this as a warning. If you see me crying or fuming in the corner, it’s probably best to leave me be. Chances are, I’m probably just having an internal struggle with the fact I’m sick of someone’s face and I feel guilty.

But, despite all my internal struggles, I can’t wait to meet my daughter and hopefully get my hormones back in check. Is it October yet?