​NNO offers me peace of mind 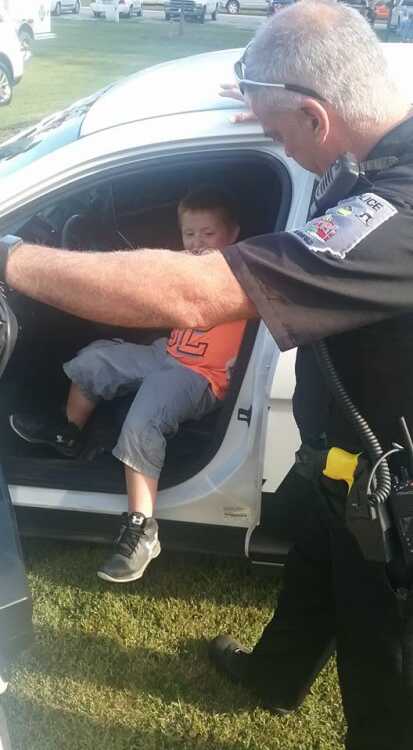 It’s been a couple of weeks since the 2017 National Night Out of Greene County event, and my family is still seeing the positive effects of bringing together the community and local emergency personnel.

This year, with the help of Patti Danner, I was able to put away my camera and reporter’s notebook and take two of my favorite little guys to National Night Out as a spectator. My nephews -- Jayden is 6 and Bryson is 3 -- have not had much interaction with police in their short lives, which is a good thing. So, as the ever-worrying aunt who has worked the crime beat, I wanted to make sure the boys had a positive interaction with local police to familiarize them with the uniform in case they ever need anything.

What better way to do so than to take them to the only event in Greene County where the police are on standby just to meet with people and interact?

In my line of work, I’ve worked closely with many emergency personnel, whether it be police, fire or EMTs. For the moment, these men and women were more than just the law-enforcing badge they wear. They were human beings looking to make connections with the communities they serve.

When I took the boys to visit “my friends from the Bloomfield Police Department” at their booth, they were pretty enamored. Both boys got to sit the BPD patrol car and Officer Jordan Allor gave them both makeshift badges.

My sister and I also used this as a learning experience for the boys, too. Bryson can be a little difficult. He recently learned how to unbuckle his seat and it is a constant battle with anxiety for my sister as she makes her way down the road.

I want to preface this by saying one of the biggest concerns I hear during my work with police is parents will say something along the lines of, “If you don’t buckle up, the police will come take you/me to jail.” My older nephew had even heard this from someone and repeated it to Tharp, so instead we asked Tharp to explain the real need for buckling up.

There was no scare tactic. There were no embellishments. There was just a man who truly understands the importance of buckling up explaining to a child why he needs to wear his seat belt for his own safety.

Bryson may have seemed uninterested and confused at the time, but it worked. Every time he starts to go against his momma and even pretend like he is going to unbuckle, he stops and talks about his conversation with the police officer and how his buckle will keep him safe.

While at National Night Out, we also stopped to chat with Linton Police Chief Troy Jerrell. I was talking “shop,” like normal, but the boys were anxious to get their two cents in. Jerrell, who has worked extra hard annually to make sure the event is a success, made a special point to answer their questions. Of course, there were high fives all around for the boys. I’ve got to admit, I’ve never seen a couple of little boys so excited to get high fives.

Last week, the boys and I were sitting in a parking lot waiting to meet someone and a Linton Police Department patrol car drove by. Jayden said, excitedly, “Brina, is that one of your friends?” My answer was, “Absolutely!”

This week, a Linton Police Officer had to do an inspection on my sister’s car. Both boys stood in the window and watched with wide eyes as a man in uniform helped their mommy the whole time he was there.

Now, I have a little peace of mind knowing the boys will understand they should run to our local police and not away from them if they ever need anything.