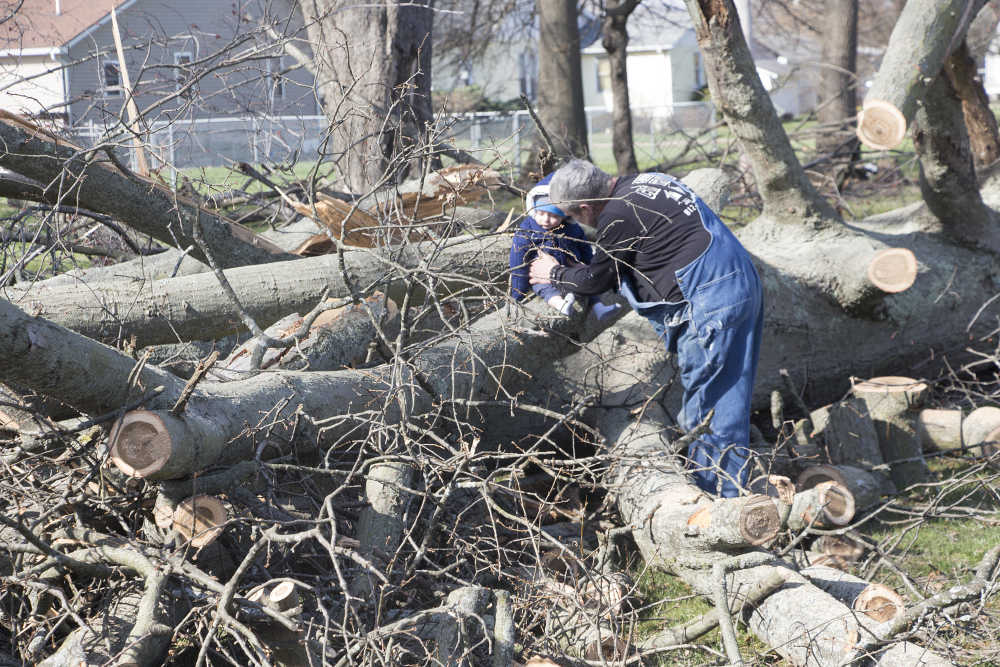 Jon Hubbell shows his 9-month-old grandson, Brixton Bessling, how far the damage of the tree stretches. (By Sabrina Stockrahm)

After straight-line winds hit Jasonville Tuesday evening, several residents were reporting damages throughout the city. But, one Jasonville man was more concerned about the location of the downed tree in his yard.

Jon Hubbell said he was lucky that he had one small tree close to his house knocked down by the damaging winds without causing too much of an issue, but it was the tree in his yard and across the driveway which was causing concern for him and girlfriend Regina Axe.

“I’m getting married in a month. This is where we are having the reception,” Hubbell said, point to the giant tree stretching from one side of the yard to the other.

Hubbell’s brother, Mike, sent an email to us at the Greene County Daily World Thursday morning asking for any type of assistance, and a post to Facebook has brought in several volunteers to help.

By 10:30 a.m., a little over an hour after I made the original post, Hubbell said three people had already stopped by asking how to help, including Dustin Myers who was the first to respond on our social media page asking for the address.

“Dustin was here asking how he can help,” Hubbell said.

Other local residents were at Hubbell’s when I arrived, seeking guidance on what kind of equipment they would need to start cutting out the tree, which had been completely uprooted.

Hubbell said this kind of response from residents throughout the city is pretty typical.

“By the time we start cutting, I bet three or four more people will show up to help,” Hubbell said.

Just before 11 a.m., Hubbell and volunteers were tracking down saws so they could get a start on removing the tree and getting the yard cleaned up in time for their wedding reception.

You can say what you want about small towns, but residents pretty much always step up when they are needed.

If you’re willing to help clean up the large tree, it is located behind the Assembly of God parking lot in Jasonville.