Our family just got bigger! Introducing Monkey and Monster; Kitty adventures Part I 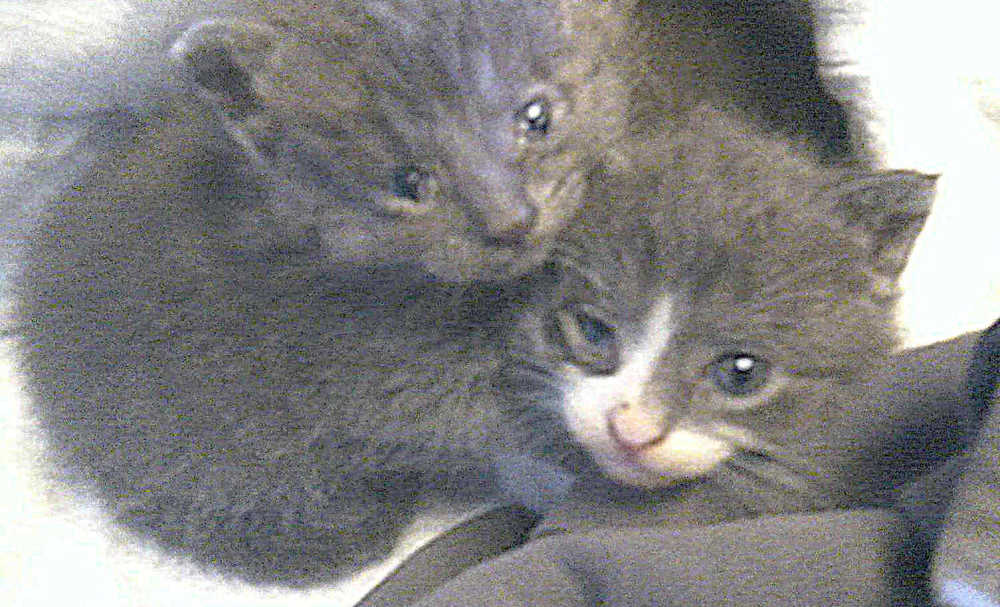 The day they arrived, Monkey and Monster were terrified little babies.

Anybody who knows me knows that I am a sucker for a furry face. If I could adopt ALL of the kitty-cats in need of homes, I would, although I would need a much bigger house and some sort of inheritance to happen.

I love cats. I like dogs, but I love cats. My cat Meep is my best friend (sorry, John...) and for the last eight years, our house has been occupied by John, me, Meep and Zephyr.

Zeph is John’s best pal, and it is not uncommon to walk by the two of them and see them holding hands. Not even kidding, it’s pretty weird but also sweet and sincere.

And then the invasion happened.

In late August, John messaged me to tell me he was going to bring two kittens home and they would need to be bottle-fed, as they were just a few weeks old.

Their mama-cat was a recycling center stray they called Fraidy-cat because they thought she was afraid of humans. Turns out she simply loathed all humankind and would shred any that got in her way.

John could see that her kittens weren’t thriving, and he just felt sorry for the poor critters.

That day, he brought home two of the sorriest-looking little waifs...they were dirty, scared and looked at us as though we wanted to eat them but they didn’t take terribly long to change their minds when they realized we would provide warm milk and lots of attention.

He and I took shifts, John being the day-kitty-sitter and me taking the night shifts. They needed to be fed about every three hours at first, and we had to manually stimulate them to go to the bathroom and wipe their little faces clean after a bottle.

We got pretty good at it, really.

The same week we got the first two kittens, one of them got sick. She had an upper respiratory infection, pretty common in kittens birthed by feral mothers and kept outside. We got lucky and were able to get her some antibiotics. I remember sitting with her after the first dose, telling her how she was going to feel better soon, and trying to keep the other kitten from pouncing on her to play. I felt so sorry for the poor little thing.

After a day or so, she did feel better and we were so happy to see her playing and jumping and taking part in normal kitten insanity.

I started calling the first two kittens Monkey and Monster. I don’t know where I got the name Monkey from or why, but Monster was clearly named for her personality. She is a monster in a good way, though.

After a few weeks, the fleas came. Bajillions of them. It was heartbreaking to see the kittens start to play and have to stop to itch constantly. They took it in stride, but we didn’t. They were too young for traditional flea treatment, so I asked the Kitten Lady via her helpful website.

We realized we would have to give them a bath using Dawn dish soap to kill the fleas. The treatment doesn’t prevent more fleas from just jumping aboard but it does give the kittens some relief and the added benefit of soft, fuzzy kittens who smell like flowers!

If you have never seen the look on a baby kitten’s face when you give it a bath, I recommend it, it’s hilarious. We made sure the kitchen was warm, had plenty of fluffy towels on hand, blow dryer, we were ready and worked well as a team.

We did the best we could, and it seemed to help. Sure made us feel better and they recovered just fine.

Monkey and Monster, Monster and Monkey. But Fraidy Cat had more than two kittens, she had four kittens......to be continued.