Popsicles rule, other teams drool--thanks, everyone! 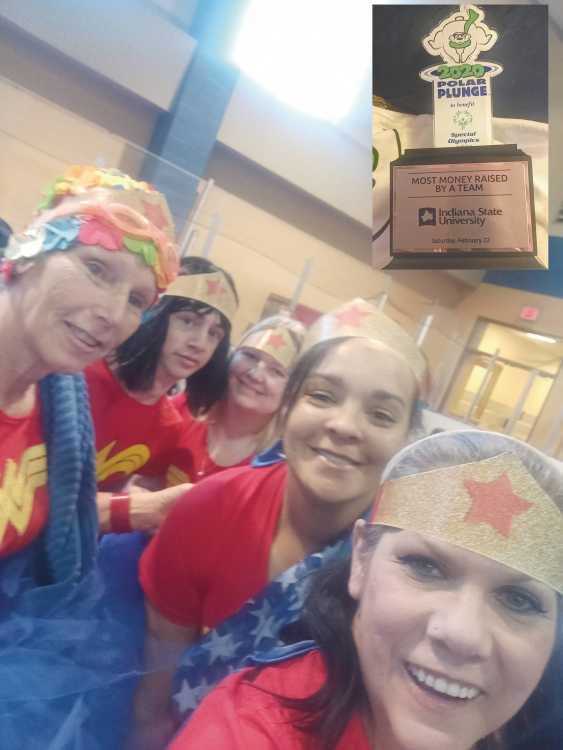 Five of Greene County's most insane and awesome people (plus five more who raised money and stayed home like jerks) the Greene County Popsicles.

On Saturday, Feb. 22, my teammate Keshia Buskirk picked me up at my house wayyyyyyy too early and the two of us headed to the ISU campus to meet the rest of the Greene County Popsicles: Linda Bedwell, Riley Mayfield and Matthew Hayden so we could take part in the 2020 Special Olympics Polar Plunge.

Plunge participation is limited to the truly crazy, because the whole event is centered around a very cold pool of water with ladders on both sides with a lifeguard standing inside to make sure nothing tragic happens (and also to laugh at the expressions of people when they come back up. What a great job...).

That pool is there for the purpose of doing the unthinkable in February, the absolutely insane notion of jumping in. Wearing a costume. In front of people.

There is always a large viewing audience (who also laugh at the expressions of people when they come back up) and half of the fun comes from looking at the creative costumes of other teams. The other half comes post-event at the ‘After-Splash Bash,’ where there is free food and your limbs begin to thaw.

In between those halves, it is sheer terror. There is nothing on earth you would rather do less as you stand in line waiting nervously for your turn, knowing that you said you would and now you have to.

Luckily for the Popsicles, the team who raises the most money gets to go first. Going first ensures you all have less time to wait in line and therefore suffer from less anxiety and you also appear first at the After-Splash Bash, ensuring you will get as many of the good cookies as you want.

This year, thanks to the generosity of many Greene Countians, our team raised $8,215 to benefit our Special Olympics athletes right here in Greene County, which earned us the Most Money Raised by a Team trophy.

As is her custom, our Team Captain, Linda Bedwell, earned a trophy for Most Money Raised by an Individual. Of our $8,215, Linda Bedwell raised $7,000 of it.

To say we feel humbled by her accomplishments would be a gross understatement. Very gross.

The ISU event raised at total of $31,896 for Special Olympics Indiana, and was just one of many locations plunges were held.

Buuuuuuut, to say we feel proud as heck of our team, which consisted of the five of us plunging plus five “virtual” plungers who got to stay home all snuggled up in their jammies like jerks: Wyatt Stone, Bill Bedwell, Chris Gehring, Kayla Smock and Karly Smock, would also very much understate the fact. (Just kidding about your being jerks, you're awesome)

Our little 10-person team were competing against teams made up of from 10 all the way to 49 members, and we raised the most. That speaks volumes for Greene County.

It’s because of the people who live here and open their hearts and wallets that we were able to do what we did.

So, to the 96 donors who contributed to Linda’s astounding success, thank you.

YOU are why Greene County is such a great place to be.

To the seven donors who pitched in to help me raise $515, I LOVE YOU THANK YOU SOOOOO MUCH!!!!!

To the Greene County Humane Society, Scott Green-Osborn, Roger and Cleta Shake, Chris Romans, Rachael McKee, Becky Thompson, Chris Pruett and Christy Lehman, I would gladly jump into another pool full of icebergs, dressed as Wonder Woman and sporting a tutu in the red and blue of the Linton Miners, for each of you, thank you so, so much.