The elimination mile gets rid of the slowest runners 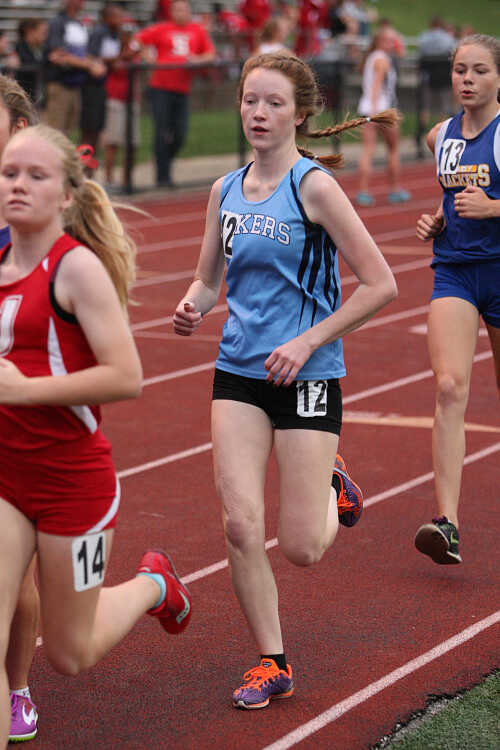 File Photo Liz Bredeweg of Shakamak (center) races in the 3200-meter run in the Bloomington North Regional. Nitro Sports has introduced a new concept in track and field: the elimination mile. Could that be applied to the 3200 as well?

There are times, especially when reading some of the driveling idiocy that passes for political commentary these days, that I think the Internet is one of the worst inventions of the human mind.

Then again, someone posts something cool on Facebook and I think: The Internet is wonderful!!!

Case in point, former Eastern track and cross country coach Ray Hausler posted a video of a Nitro Athletics track meet in Melbourne, Australia. Six men ran an elimination mile race in February. At the end of each lap, the last-place runner had to drop out. I watched a clip of a race that Ray shared and it was a pretty cool race. I checked out Nitro’s web site and the company is proposing other changes to make track and field more exciting, including a hurdles relay, and a turbo charge, a bonus awarded to a long jumper who achieves a certain distance on one pre-selected jump.

One commentator suggested that a big bruiser like The Rock or Stone Cold Steve Austin come out and take out the final competitor on each lap. While that would make a race more entertaining, it is kind of hard on the runner. Still that would be a good incentive to improve one’s time.

More importantly, I learned of the death of First Lieutenant Stephen “Chase” Prasnicki several years ago. Lt. Prasnicki was the back-up quarterback at Army and played free safety in his senior season.

A native of Lexington, Vir., he went to Afghanistan to serve with the Fourth Battalion, 319th Airborne Field Artillery Regiment, 173rd Airborne Brigade Combat Team. Lt. Prasnicki and Sgt. James L. Skalberg, Jr., of Cullman, Ala., died June 28, 2012, in the blast of an explosive device.

I was wondering if Greene County coaches could let me know of any former athletes who have gone to serve in the military. I would also like to hear from veterans who played sports at one of our schools. I would like to do a story or stories about them. Please contact me by phone at 812-847-4487 or 520-661-3281, or by email at andrebohun@yahoo.com.

Peace out and have a great weekend.