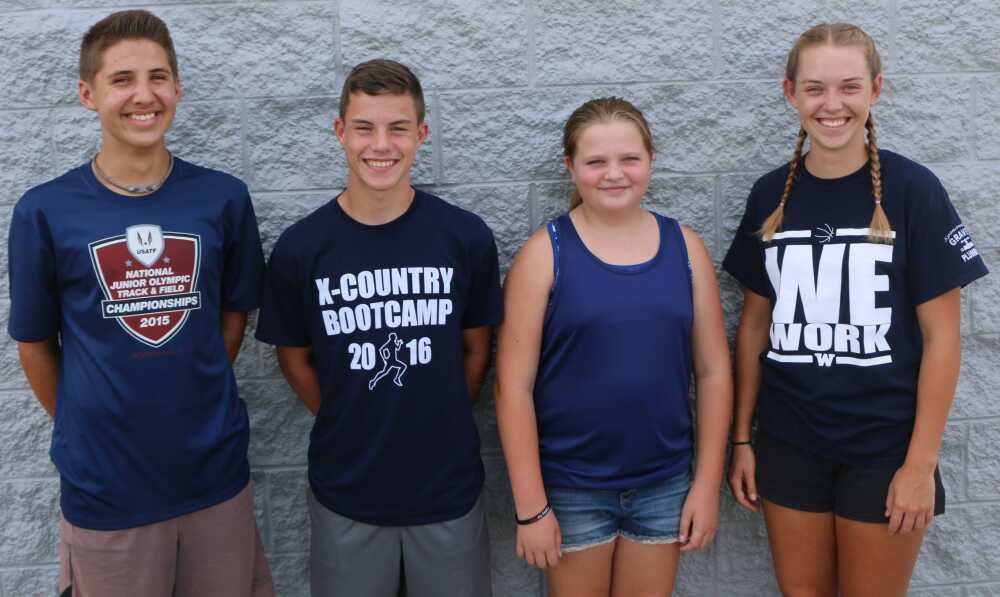 (From left) Tanner Denham, Joe Records, Becca Robbins, and Abby Denham will compete this week in the USA Track and Field Junior Olympics at the University of Kansas in Lawrence, Kan.

The football season will start three weeks from Friday.

Greene County teams will swing into action on Friday, Aug. 18. Eastern will travel to Springs Valley while Linton hosts Southridge.

The Raiders went 10-2 last season. There is a chance the Miners could face them again as Linton has been promoted to Class 2A , and Southridge is one of their potential foes in a tough Sectional 40 field that includes perennial powerhouse Evansville Mater Dei.

Union will play its first game on Saturday, Aug. 19. The Bulldogs are scheduled to face the Noblesville Lions at 6:30 p.m. that day.

The girls will begin playing even sooner than the football teams.

The Linton Lady Miners will be the first volleyball team to swing into action with a game scheduled for Aug. 10 at Covenant Christian. The other teams in the county will begin playing around the time the footballers do. According to the early schedules, White River Valley will travel to Linton on Aug. 16; Eastern will play Shakamak in an August 19 tournament; Shakamak hosts Owen Valley on Aug. 14; and Bloomfield hosts Shakamak for its first game on Aug. 15. No schedules were available for Union.

As usual, the Daily World will run a preview of all the fall sports, including boys tennis and cross country.

I just wanted to issue a reminder. Four county athletes are competing this week in the USA Track and Field Junior Olympics at the University of Kansas in Lawrence, Kan.

We will report on their progress next week.

As a personal note, I love track, just not as much as football, and I'm glad to see it continue throughout the summer. In some respects, I think it is the purest measurement of athleticism -- how far you can throw, how far or high you can jump, and how fast you can run.

I've seen some games in just about every other sport where I was sorely tempted to either offer my glasses to the referees or ask them how much they were paid for that call.

Since track events have relatively few rules, I've never had those temptations for this sport.

Good luck to Becca, Joe, and the Denhams.

Went swimming at the New Albany Y this weekend, and my good friend Rick Lovett invented a new word: swogging. It describes the movement one makes when walking through water and making swimming motions with your arms.