Of new coaches, new programs, and an old injury 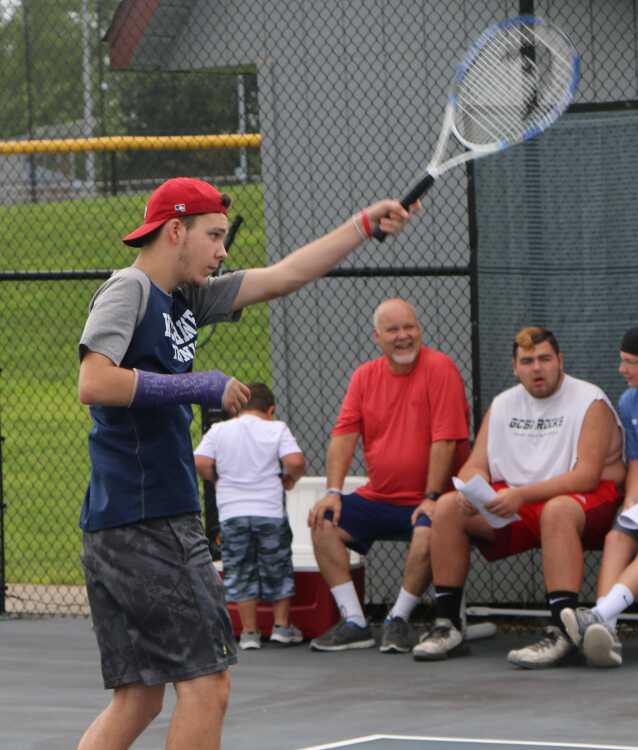 Eastern should have a new basketball coach soon.

Athletic director Joey Paridean said Friday afternoon that the school has interviewed several candidates, and he hopes the school will soon be able to name a coach. The newcomer will replace Zach Stevens who coached the Lady Thunderbirds for seven seasons.

October 16 marks the first date that girls can practice hoops.

White River Valley has a new cross country coach. Claire Records will take over the helm for both the boys and the girls teams this season. She replaces not one, but two coaches, boys coach Mike Karr and girls coach Sara McIntosh.

We wish Records and all the county cross country teams the best. Last year, Greene County sent six boys and girls to the semistates, and there’s an excellent chance, in my less than humble opinion, that the county could equal that number this year.

I was talking to Bloomfield girls cross country coach Ashley Patton Monday afternoon. I learned that she has run marathons which is pretty impressive.

The marathon is 42.195 kilometers, or 26 miles, 385 yards. Athletes ran the marathon in the very first Olympics back in 1896, although the distance was not standardized until 1921.

According to legend, the race was named in honor of a Grecian warrior named Philippides or Pheidippides. The legend states that he ran from the battlefield of Marathon to Athens to announce that the Persians had been defeated in the Battle of Marathon, which took place in August or September, 490 BC. Once again, according to legend, which is probably more accurate than half the stuff on the Internet, Philippides ran the entire distance without stopping, burst into the assembly of Athens, yelled “We have won!”, and dropped dead. That’s dedication to reporting.

Patton coached the junior high team for two years and last year served as assistant coach for the boys, girls, and junior high teams. She replaces Bob Richardson who moved over to replace Caleb Dunkerly as boys coach.

I was joking with a coach in a sport other than cross country. He noted that running extra laps is the usual punishment coaches assign to players who are not up to the mark.

He said that would not work with harriers; they already love running. How are you going to punish them by demanding more?

The Wolverine soccer team will hold a scrimmage with North Knox at 6 p.m. Thursday at WRV. WRV coach Matt Settle said this will give the coaches a chance to make adjustments before the Wolverines kick off the 2017 season at 11:00 a.m. Saturday, Aug. 19, when they host Sullivan.

Settle also noted that this year marks the first that WRV has fielded a junior high soccer team. He said boys and girls in Grades 5-8 will be eligible for the team. Settle said the junior high program will make WRV’s high school team better.

“These players are our future,” Settle said. “We’re preparing them to play at the high school level. It will make us compete at a higher level with our high school program.”

WRV sophomore Clayton Hoover should soon recover from the broken wrist that kept him from throwing the discus in the USA Track and Field Junior Olympics held July 24-30 at the University of Kansas in Lawrence, Kan.

He was slamming the ball with enthusiasm Monday afternoon at WRV’s tennis practice. Tennis coach Jimmy Beasley, Sr., said Hoover’s cast will be off Wednesday. He may not play tennis for the Wolverines in the team’s first week, Beasley added, but should return to action soon. Beasley said Hoover worked hard all summer and should compete for a starting singles spot.

“His serve is a killer,” Beasley said.

No wonder since Hoover threw the discus farther than any Indiana freshman last spring during the track season.

Beasley and I briefly discussed the tennis sectional. The coach said he thinks all four teams in it -- WRV, Linton, Bloomfield, and North Daviess -- will have a good chance of winning it.

“We like to think that anybody in the conference has a shot,” he said.

The sectional will be played at Linton this year. Beasley said Linton’s new tennis courts offer a “beautiful” facility upon which to play the sectional.

We will preview all the area tennis teams Friday, Aug. 18, when we publish the fall sports preview. Most other teams in the county and Union will also be previewed.