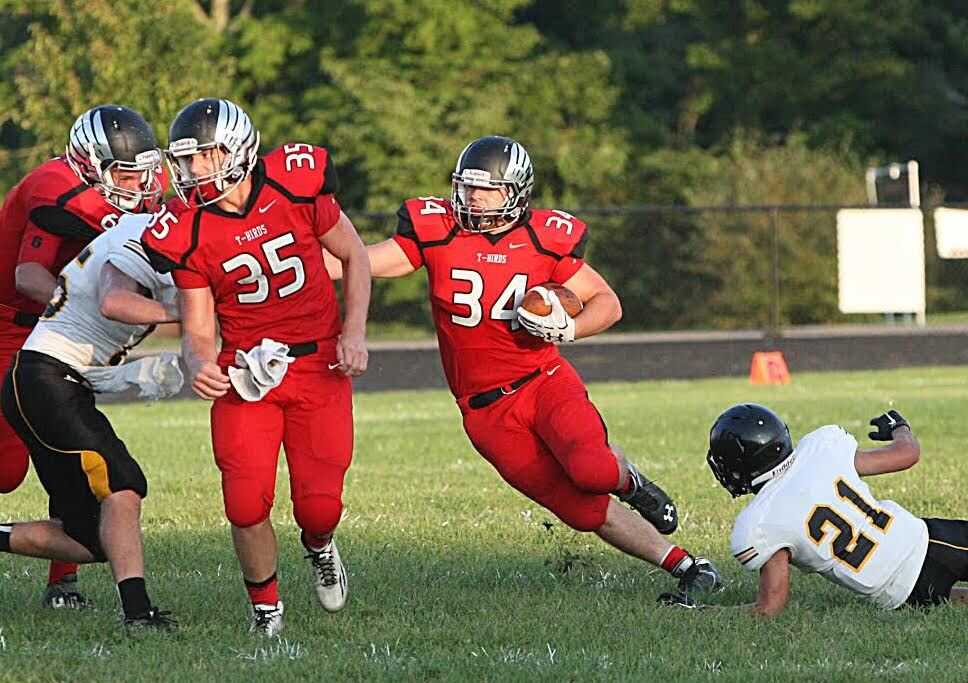 Running back Isaac Hamilton (34) dashes behind the block of his brother Caleb (35) in last year’s game against Springs Valley.

I went to Eastern High School Friday night, notebook and camera in hand, well, at least in my carrying case, eager to cover the Thunderbirds’ scrimmage with Brown County.

I didn’t see many cars and couldn’t hear any cheers. I still walked up to the field, but all I could see was one of the boys’ cross country runners trotting around the track.

Being the brilliant detective I am, I soon deduced that Eastern’s scrimmage with Brown County was not being played in Little Cincinnati. I headed back to the office and called head coach Joey Paridaen to find out what’s going on. I could only get his answering machine.

Soon, Terry Schwinghammer came in and told me that the scrimmage had been moved to Brown County, and he had forgotten to tell me.

I told Terry that: “Now, Joey will think I’m a damn’ idiot. [Pause.] Oh, well, the bright side is that he already knows that.”

Later, I called Paridaen and he said the scrimmage was moved because of the field’s condition.

He said the Eastern offense began the scrimmage on a flat note. The Thunderbirds couldn’t score on their first 15 plays.

“We came out flat. I wasn’t at all happy with the way we come out at the beginning of the scrimmage. It’s kind of frustrating. After two weeks, you hope your guys would come out ready to play.”

However, Eastern’s defense held Brown County without a score on the Eagles’ first 15 plays. Paridaen said the T-Birds played pretty good D in the scrimmage.

On the second series of 10 plays, the Eagles took advantage of a missed assignment to snag a touchdown. Then the Thunderbirds ran three plays and scored on Blaine Campbell’s run.

After a brief lightning delay, Caleb Hamilton hit J.W. Howard with a scoring strike, and Levi Southern dashed in for another TD.

The T-Birds ran another 10 plays which saw Jackson Rogers and Hamilton run for scores.

Eastern may have outscored Brown County five TD’s to one, but Paridaen said they need to come out with more elan next week against Springs Valley.

“We weren’t as crisp as I wanted us to be,” Paridaen said. “Hopefully, we’ll come out more crisp next week.”

Next week, we’ll have coverage of Eastern’s opening game at Springs Valley. To whet your appetites, I’ve included a picture from last year’s game with the Blackhawks.

Isaac Hamilton has graduated to join the real world. Caleb will be in Eastern’s backfield next Friday in some capacity.

I owe an apology to White River Valley soccer coach Matt Settles. In the Thursday, Aug. 10, edition of The Daily World I consistently misspelled his last name as Settle.

Here of late, I’ve been quoting Napoleon Bonaparte, and this is another good one.

“I’ve made so many mistakes, I no longer worry about them.”

We’re putting in another photo of the scrimmage.