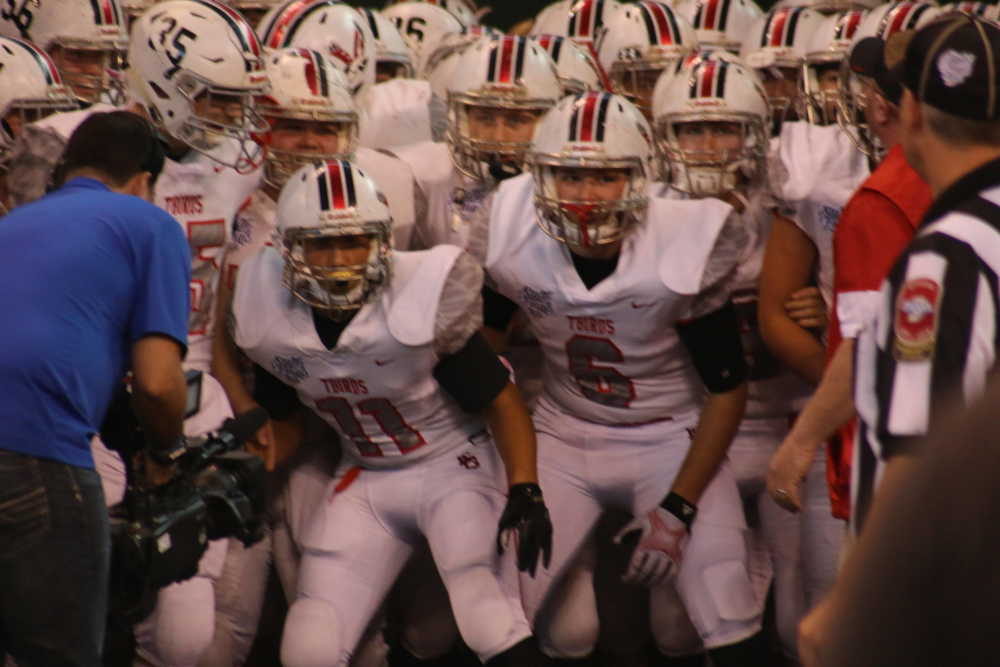 By Andrew Bowen The Thunderbirds, led by J.W. Howard (6) and Joel Weimer (11), get ready to take the field Friday afternoon.

Just like Rooster Cogburn, the Thunderbirds displayed true grit to the bitter end.

Eastern fell 42-14 to Pioneer in the Class 1A championship Friday, but they went down swinging.

Center Brady Anderson's shown that grit since the sectional championship. He's played every game with his broken left arm in a cast. Ibuprofen and intestinal fortitude helped him ignore the pain Friday and protect quarterback Caleb Hamilton.

Nick Fox displayed that grit in the first quarter when, on third and 5 at the Pioneer 46, he caught a pass from Hamilton and dashed for a first down. He could have gone out of bounds, but elected to stay in and get a couple of more yards on a 12-yard play.

Hamilton had told me, for a story we published in our Nov. 22 special section, that he enjoyed punting. He proved that Friday with one of his toe's best days. He punted four times for an average of 44.0 yards, pretty darn respectable in anyone's book.

After Eastern trailed 35-7 and a comeback was looking as improbable as Aladdin's lamp, the Thunderbirds didn't quit. They marched 78 yards down the field for their second touchdown.

The fans stayed with the team until the final horn sounded. One woman consistently tried to start cheers in the far eastern half of the cheering section, almost the length of the field away from the cheerleaders. With only 10:18 left on the clock, one man shouted: “Let's go, T-Birds.”

“It sucks that we lost,” fullback Levi Southern said, “but I'm super-proud of everybody on the team because we accomplished a lot.”

“We made it in a year when nobody expected us to win the regional and the semi state,” Hamilton said.

When the players walked off the field, you could see the hurt and pain on some of their faces. No one wants to get beat 42-14, especially in a game for all the marbles. However, in the years to come I think the Thunderbirds will cherish all the good things about this season: beating 14 foes, 12 times by double digits, winning the second sectional title and the first regional and semi state titles in school history, and posting the first-ever win over Linton.

Even more important are the friendships made.

“They're my family and I'll miss everything about them,” Hamilton said.

The Thunderbirds can also take solace in this: With nine exceptions, every team in Indiana would have killed or sacrificed goats to Cthulhu to be where they were Friday afternoon.