The importance of being devoted, corrections, and humor on a softball field

After Thursday’s Bloomington North Sectional, I listened to a jubilant Micah Mobley, the Edgewood track coach, talk to reporters about his team’s second-place finish.
The Mustangs had just become the first team in 20 years, other than Bloomington North or South, to place second in the sectional. Mobley talked about the sacrifices the Mustangs had made for that finish.
White River Valley coach Conner Hill also mentioned a couple of young men who showed some extra devotion to WRV’s track team. Hill noted Caleb Fish ran the 300-meter hurdles in 49.35 seconds to place 12th.
“We know the hurdles aren’t Caleb’s favorite event to do,” Hill said, “but we appreciate him being willing to take one for the team, and run them for us. Caleb also placed 14th in the long jump.”
Hill also mentioned Shaun Gibson who ran on the team’s 4X800 and 4X400 relays. Those teams finished fourth and eighth, respectively, in the tough sectional field. Hill said the Wolverines call Gibson “our relay extraordinaire” because he runs a leg on all three relay teams.
“At the beginning of the season, Shaun was a sprinter. Midway through, we had to make Shaun a distance runner to fill a spot on our 4x8,” Hill said. “He has really stepped up, and we are proud of him for being willing to make the switch for the team.”
Gibson and Fish might not have made the field for this Thursday’s regional, but the devotion and the work ethic that earned Hill’s praise are two of the reasons 10 county boys and six county girls will compete in the regionals this week.

We misidentified four runners in the Friday, May 18, issue of The Daily Times. Ben Lindsey and Cory Cramer of Eastern were misidentified as Shaun Gibson and Beau Driscol.
Here are the pictures with the correct IDs: 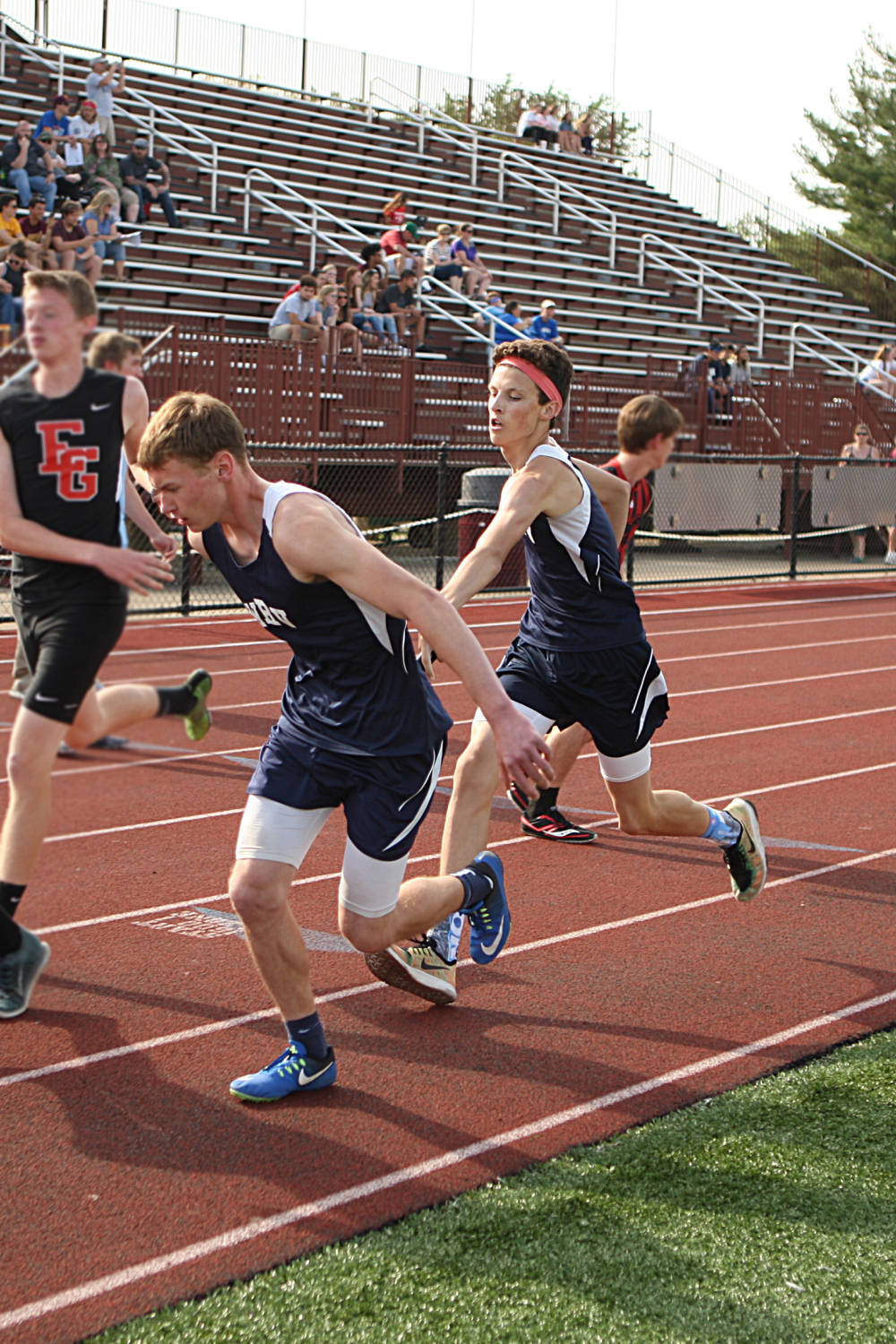 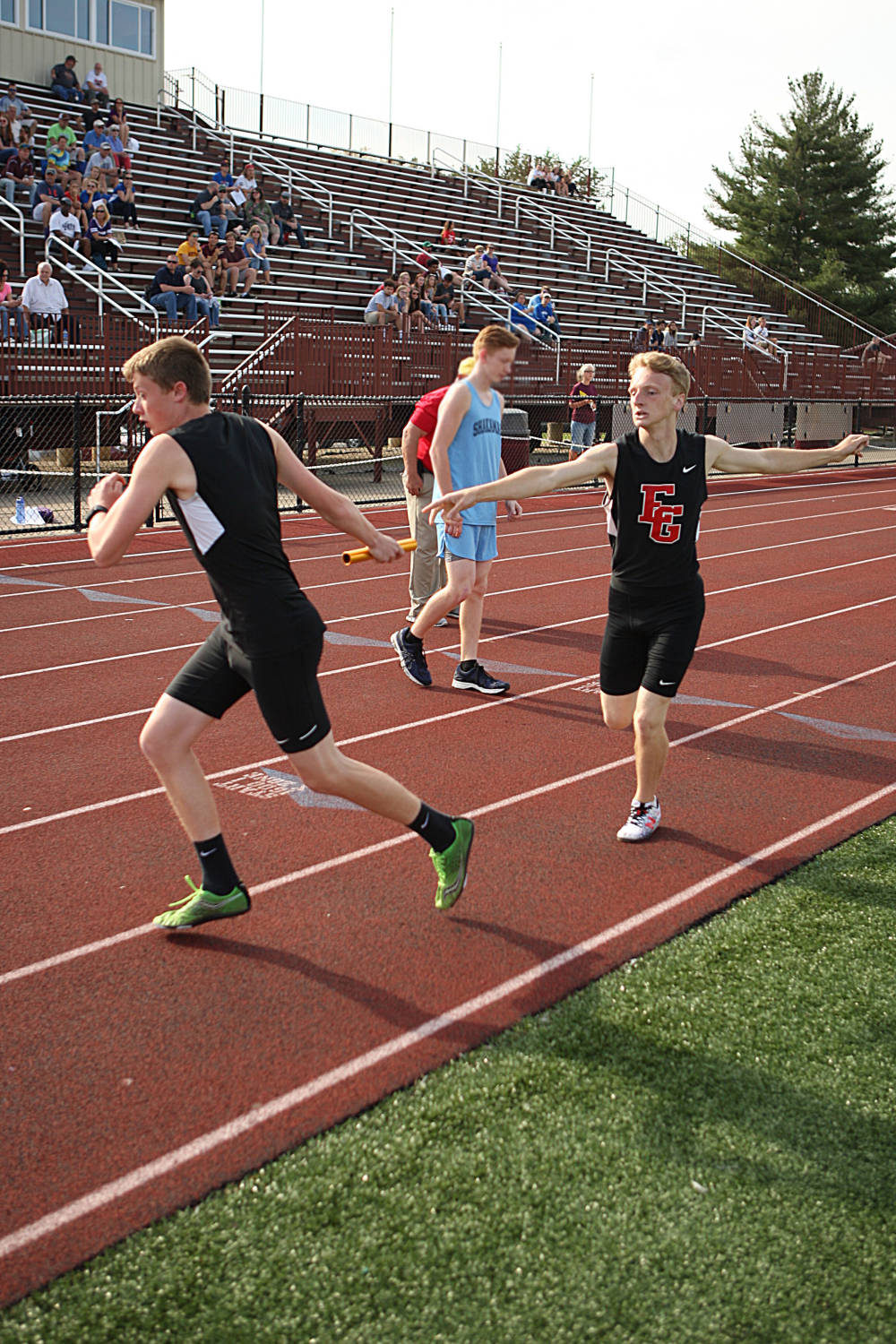 Bloomfield dedicated the Canty Courts on May 8. These are six tennis courts located about 4.5 miles south of Bloomfield and named in honor of coach Mike Canty and his late wife Nancy.
Coach Canty said the courts will make a tremendous difference to Bloomfield’s tennis program. Previously, the netters had to use the courts at the school, but there are only three of them.
“It changes everything you can do,” Canty said. “It’s just a much more pleasant to play.”
Seventeen girls came out for the team this spring and 15 stayed through the season. In the old days, Canty said, he would have had to run two practices because of the limited space; now he can run one for that many players.
The doubles teams no longer have to wait to play their matches, he said. Canty added the JV players can see more action on the Canty Courts. He said Bloomfield can now get in about four or five JV matches whereas the B team couldn’t see action before 7:00 p.m. on the old courts.”
“It’s just a pleasant atmosphere out here,” Canty said. “It’s like a park.” 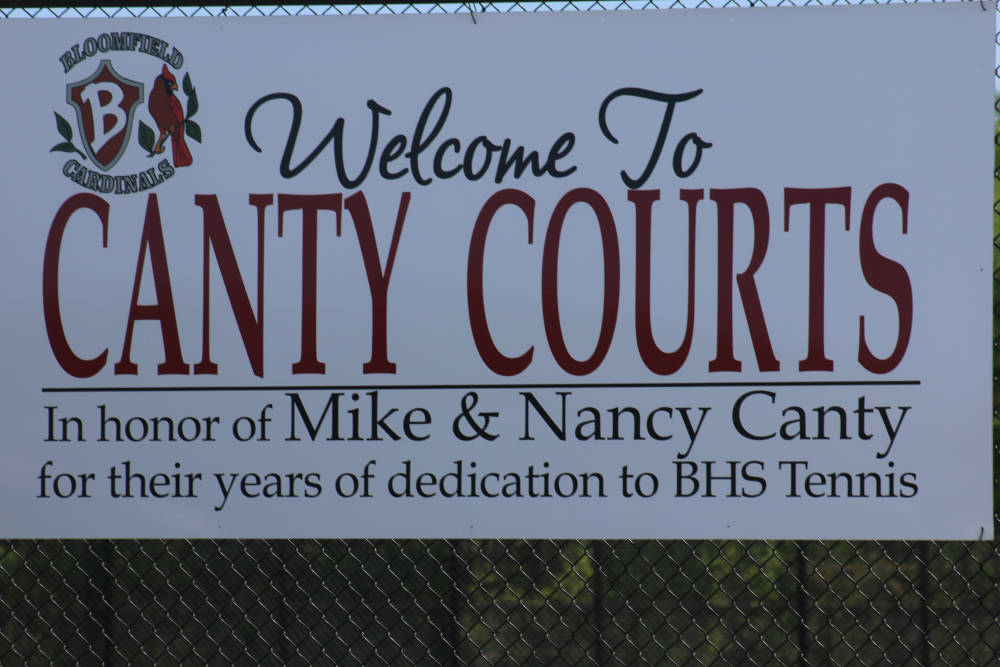 This sign is on the northern fence of the Canty Courts south of town. Bloomfield coach Mike Canty said the new courts are a much better facility than the old courts at the high school.

The funniest event of the spring season occurred May 7 during the Eastern-Owen Valley softball game. Pitcher Lynnly Kirkman tried to steal second for the Lady Thunderbird. She was tagged by the Owen Valley shortstop who, we hope accidentally, caught her in the mouth with the mitt holding the softball. Kirkman lay on the ground, stunned, for a few moments. As she walked off the field, she loudly asked her teammates: “What’s the name of that girl? I’m going to hit her the next she comes up!”
It’s probably a good thing the game ended and Lynnly didn’t get the chance to yield to temptation.