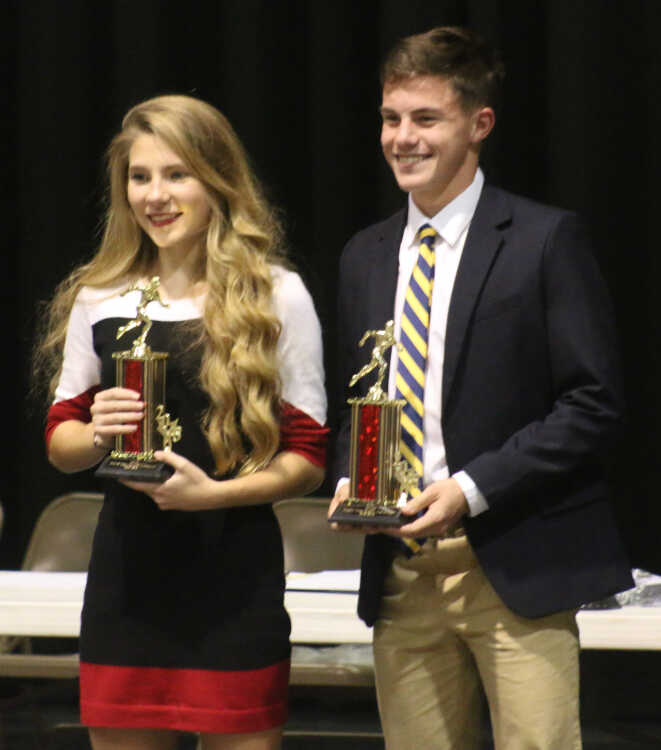 The Shakamak Lady Lakers enjoyed a terrific season this fall as they made the semistate for the first time in school history. Shakamak junior Jacy Collins and White River Valley junior Joe Records received trophies Tuesday night at the Southwest Indiana Athletic Conference banquet for placing first in the conference meets.

The Lady Lakers just concluded the most successful cross country season in the school’s history, but it’s not enough.
Shakamak made the Brown County Semistate this fall, the first time a Lakers cross country squad has advanced that far in the post-season. Junior Jacy Collins went on to run in the state meet for the second consecutive year.
After Collins placed 127th in the meet, Coach Mark Messmer said the Lady Lakers are hungry for more success; they would like to make the state meet as a team next year.
“If we can do that,” Messmer said, “that would be amazing.”
The girls currently run 30 to 35 miles per week, and Messmer said the coaches and runners are thinking of increasing the distance. Messmer explained the coaches thought about upping the roadwork this fall, but were concerned about the risks of injury to a small team. He said the Lady Lakers are excited by the success they’ve had this season and want more, much more, so more miles on the road may be required.
“They’re hungry now. They’re not satisfied with the semistate.”
Collins, Carly Reynolds, Jaci Stone, Kyrstin Busenbark, Jada Huff, Natalie Lang, and Hannah Walters competed at Brown County and placed 13th. The Lady Lakers will lose only Busenbark to graduation.
Obviously, they will have to run harder to make the state meet as a team, but the rewards will be worth it.
“That way Jacy won’t have to get on the line by herself,” Messmer said.