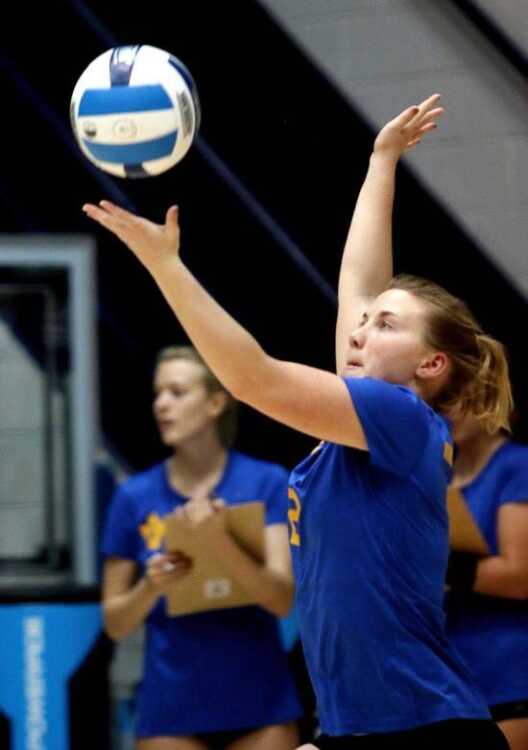 Courtesy of Matthew Griffith, VU Athletics Brantli Lannan prepares to serve the ball for the Lady Trailblazers during the regular season. She may play as Vincennes University’s libero next season.

Two former Linton-Stockton volleyball players should see even more court action for Vincennes University next season.
Freshmen Brantli Lannan and Ryleigh Fidler both saw action in virtually all 40 of Vincennes University’s matches. Coach Gary Sein said that came as no surprise to the VU coaches since 12 first-year players took the court for the Lady Trailblazers this fall.
“They definitely both played quite a bit,” Sein said. “At this level, that’s an unusual amount of first-year players.”
In 39 matches this season, Lannan came up with 301 digs on the back row and made only 20 reception errors. She drilled 23 aces and dished out 21 assists.
Sein said he knew Lannan would emerge as one of VU’s top defensive players. “She played quite a bit. She’s very, very coachable.”
That experience will give Lannan a leg up to be VU’s libero (defensive specialist) next year, Sein said. He added that Allison Ruddick, the Lady Trailblazers’ current libero, leads the nation in digs with 848. Sein said the VU coaches pride themselves on finding the right people for the libero position.
Fidler also turned in an impressive season for Vincennes, tallying 336 kills in 894 attacks and making 42 blocks, six of them solo. She, Ruddick, and Alison Smith all earned spots on the NJCAA Division I Region 24 All-Tournament Team, Smith garnering Most Valuable Player honors.
“Getting those two (Lannan and Fidler) really shored up our back row and our front row,” Sein said.
Since nine players, Lannan and Fidler included, will return for VU next year, the coach said the Lady Trailblazers will go from one of the youngest, least experienced teams in the NJCAA to a veteran club.
He added this fall marked VU’s first time to compete in the Region 24 tournament. He said for three VU players to make the All-Region team “really gives a lot of credit to the team both as a team and individually.”