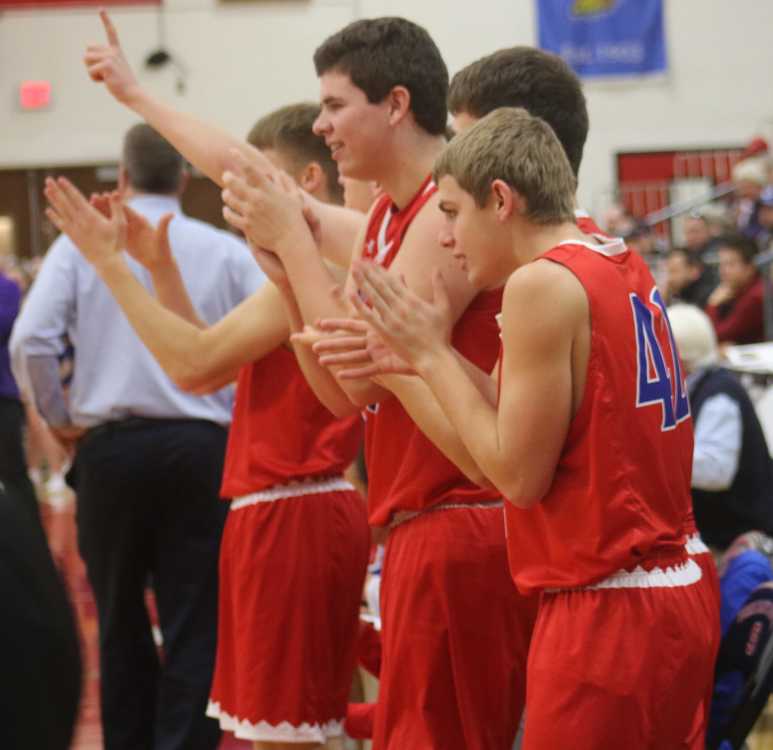 Linton’s bench applauds a basket by a teammate during the second half.

This Christmas Week brought local basketball fans a treat.
First Financial Bank hosted the 19th annual Wabash Valley Classic. Sixteen teams from Indiana and Illinois are battling at Terre Haute South this week for the basketball bragging rights for the Wabash Valley.
Linton and Shakamak play in the tourney, of course, but spectators also got a chance to see other local teams, including Sullivan, all three Vigo County teams, and Northview, as well as Illini schools like Casey, Robinson, and Marshall.
I like the tourney because it gives me a chance to watch games without covering them for the paper. It’s fun to be a spectator, sometimes.

Miner Pride
Linton-Stockton currently owns a 6-1 record and is ranked seventh in the weekly Associated Press Class 2A basketball poll.
I think one reason for the Miners’ success is their esprit de corps, an attitude other county teams should emulate. The Miners demonstrated this Wednesday afternoon in their victory over Casey-Westfield (IL).
When a Linton player would score, the reserves on the bench would jump up and clap. That pride in their teammates’ success contributes immensely to team morale, I think.

More tourneys
Even more tournaments are coming up.
Eastern-Greene will host the Toby Yoho Classic this weekend. The Lady Thunderbirds (5-9) will take on Riverton Parke (0-12) at 11:15 a.m. Friday. Then they will clash with Owen Valley (9-5) at 2:45 p.m. that day.
The Toby Yoho Classic will continue on Saturday. Other teams in the tournament are: Brownstown, Clay City, North Daviess, Edgewood, Trinity Lutheran, Cloverdale, Forest Park, Paoli, and South Knox,
The Thunderbirds will venture to the depths of Morgan County this weekend to participate in the Monrovia tournament. The Thunderbirds (3-5) get in action early Friday when they face South Putnam (5-2) at 10:30 a.m. Later that day, they will play another team, their foe to be determined by the teams’ success in their first games. The team will continue playing on Saturday.
Other teams in the tourney are: Monrovia, Indianapolis Scecina, Greenwood Christian, Brown County, North Putnam, and Southwestern (Shelbyville)
Next week, of course, brings the Big Kahuna. The Graves Construction Services and Mutual Bank Greene County Invitational will kick off with four games on Wednesday, Jan. 2.
Eastern-Greene will take on Shakamak at 11:00 a.m. Wednesday to begin the invitational. Linton-Stockton is slated to play Lighthouse Christian Academy at 12:30 p.m.
The evening session will begin at 6:00 p.m. Wednesday when WRV meets Eminence, a team the Wolverines have already beaten in the Riverton Parke Invitational. Bloomfield takes on North Central at 7:30 p.m. in the final game Wednesday.
The action on Thursday, Jan. 3, will see the losers of the morning games play at 6:00 p.m., and the losers of the evening games battle at 7:30 p.m.
The winners of the first two games will meet at 6:00 p.m. Friday, Jan. 4, and the winners of games three and four are slated to play at 7:30 p.m.
Saturday, Jan. 5, begins at 11 a.m. when the losers of Thursday’s games face off. The winners of those games are scheduled to play at 12:30 p.m.
The losers of Friday’s games square off at 6:00 p.m. Saturday to determine third and fourth place. Friday’s winners clash at 7:30 p.m. Saturday in the championship.
Hope your Christmas went well and Happy New Year!