Daily World to put out special section for regional 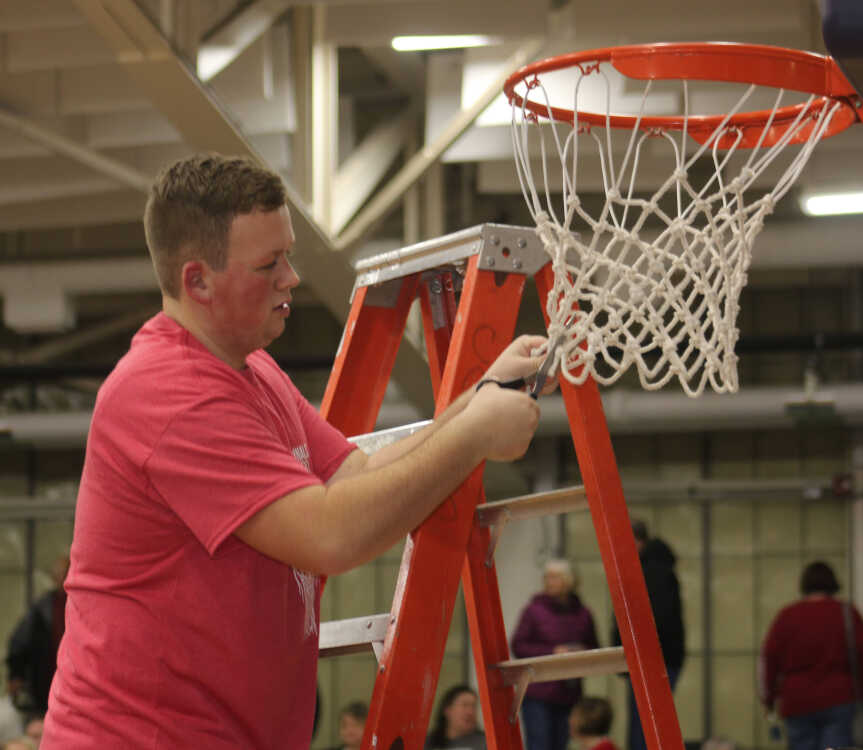 Graysen Medina cuts down his share of a basketball net after the game.

Originally, I was going to write a column about the Cardinals’ reaction to winning Saturday night’s Clay City Sectional championship.
However, we are putting out a special four-page broadsheet this Friday to commemorate the sectional titles of Bloomfield and Linton-Stockton. The original column will appear in that, but there are still a few observations to make about Sectional 57.

First, Saturday not only marked Bloomfield’s second straight sectional title, it marked Shakamak’s third straight trip to the championship game. The Lakers fell to the Cards for the second consecutive year.
However, I thought the Lakers -- especially John Gould, Nick Kinnett, Coy Gilbert, Levi Webb, Brevon Fulford, and Damon Kesler, the guys who played about 95 percent of the minutes for Shakamak -- showed the most heart of any of the teams.
They beat White River Valley in three overtimes and North Central in one to reach the title game. There, an attempt at Butcherball failed, but the Lakers can take solace in a well-deserved second place.

Second, Friday night saw the best individual performances of the sectional.
Aleksa Markovic of Bloomfield led the Cardinals with a double-double, 26 points and 11 rebounds, in their 52-33 victory over Eminence.
Gould came through for Shakamak with 22 points and four boards in their 49-41 win over North Central.
Bryton Suggs of North Central tallied 20 points, fives steals, and four rebounds for the Thunderbirds.

Third, the Indiana Basketball Coaches Association recognized two sectional performances by county players.
Markovic and Lincoln Hale of Linton-were nominated for the District 3 Player of the Week. Markovic averaged 16.0 points and 9.3 rebounds per game in Bloomfield’s three victories. Hale averaged 20.7 points per game and played solid defense in Linton’s three victories.
The IBCA chose Morristown senior Logan Laster as that district’s Player of the Week. Laster averaged 26.7 points and 6.0 rebounds over three games as he led the Yellowjackets to the Southwestern (Shelbyville) sectional championship.
Bloomfield could face Laster and the Yellowjackets Saturday night in the Martinsville Regional championship. The Cards will face Indianapolis Metropolitan (16-9) at noon in the regional’s second game. Morristown (22-4) plays Greenwood Christian (15-10) at 10 a.m. The championship will be played at 8 p.m.
Other area players nominated for District 3 were Gage Bobe of South Knox, the team that faced Linton in the North Daviess Sectional title game; Cayman Hayes, Terre Haute North; and Isaac Lane, Vincennes Lincoln.

Fourth, I thought Markovic had the best quote of the week:
“I just want to say hello to my parents and tell them I love them.”