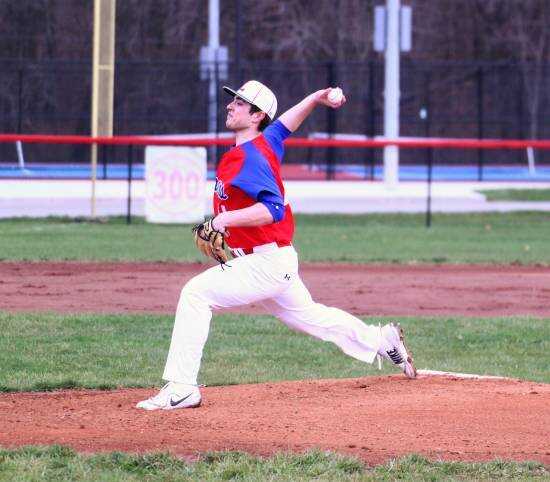 Kip Fougerousse delivers a pitch to the mound. Linton’s drive to the championship has delayed his baseball practice.

They didn’t quite get the brass ring, but the Linton-Stockton Miners made a pretty good run at the Class 1A basketball championship.
Andrean (21-8) closed the fourth quarter with an 11-0 run Saturday afternoon to defeat Linton 59-54 and win the title. Still, the Miners achieved a great deal, going 27-4, and winning a sectional, a regional, and a semistate. Only eight other teams made it as far as Linton.
It’s a pity they came up short, but I think all of them will remember this great season with much fondness in the years to come.

Tucker Hayes certainly impressed some coaches with his performance in the state championship.
The Indiana Basketball Coaches Association nominated Hayes, along with Isaac Wagler of Barr-Reeve, for its District 3 Player of the Week. Silver Creek sophomore Trey Kaufman received the honor.
Hayes led Linton with 15 points in the title game. He shot 6-12 from the field, including 3-7 from long range.

Linton-Stockton’s drive to a basketball championship delayed some players’ participation in another sport.
And they didn’t mind a bit.
Kip Fougerousse, Josh Pyne, Tucker Pyne, and some of the junior varsity players haven’t been able to practice much baseball this March because of the basketball season. That may not be a bad thing as the players said they’ve been focusing so much on basketball they haven’t thought much about America’s pastime.
“It’s kind of nice, really. There’s so much going on around the school and community,” Fougerousse said last week. “Basketball, basketball, basketball. Everyone’s talking about basketball. Everyone’s excited. It’s kind of hard to think about baseball.”
“My mind’s really been on basketball, practicing and getting better,” said Pyne.
“You know, I’ve been to a couple of practices,” Hayes said, “but mostly I’ve focused on basketball. It’s my main sport. It’s number one. It’s what I love to do.”
The drive for the state meant baseball coach Matt Fougerousse was “double-dipping,” helping the hoops team and coaching the baseball team.
“That’s a good thing,” he laughed, “because that means you’re having success.”
“I don’t go out there and practice every day in a full practice,” said his son about the days leading up to the Andrean game. “Josh and I go out there and take a few reps.”
He and Pyne said they played catch and maybe threw a few practice pitches. Coach Fougerousse said the players were only taking a few swings.
“It’s been slow,” Pyne said. “I think I’ve gotten a couple of practices in. It’s definitely slower than it usually is.”
Hayes said he played catch, but didn’t do anything too strenuous “because I don’t want to take a chance of being hurt.”
Linton opens its baseball season at 1 p.m. Saturday, March 30, at Castle. Coach Fougerousse noted players have to get five practices in before they can take the diamond in a game. He said the Indiana High School Association changed the rules because April showers bring cancellations.
“It’s hard enough to get spring games in anyway because of the weather.”
Pyne said he might be rusty that first game, but pointed out he and the other baseball players have this week to get ready for Castle.
“That’s when Kip and I will get in there and start grinding it out,” he said.
Hayes said he probably won’t be ready to play against Castle, but he expects he’ll soon be ready for the diamond.
“It won’t take me long to get ready,” he said.
“I think we’ll be fine for the baseball season,” Kip Fougerousse said. “I think I’ll get back in the flow of it when the season comes.”