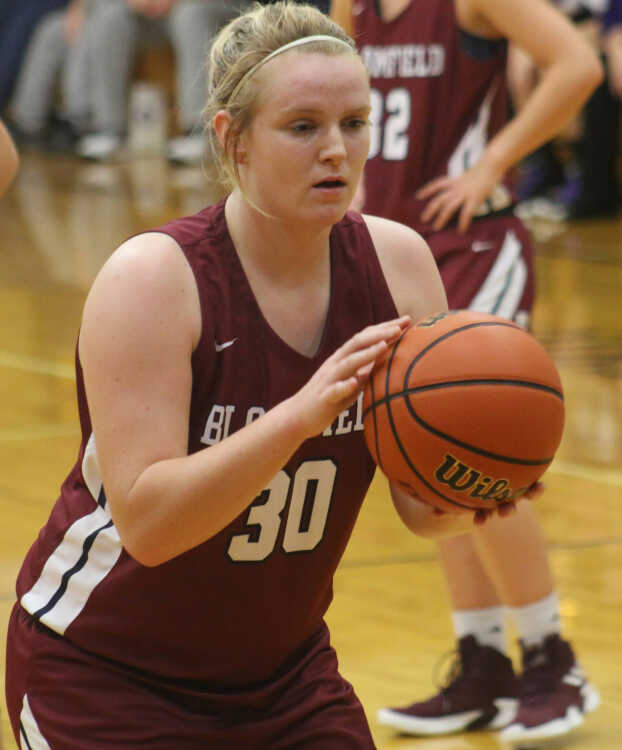 This weekend’s rain has been a good thing in one respect.
We can catch up on a few things, like publishing the All-County boys basketball team in Friday‘s paper. When we announced the All-County girls basketball team back in March, Bloomfield coach Ron Knepp sent me senior Malea Toon’s career stats. We didn’t have room to use them then, but I’m going to present them now.
Toon has shot 420-892 (47.1 percent) from two-point range, 74-254 (29.1 percent) from three-point land, and 324-548 (59.1 percent) from the charity stripe as she scored 1,386 points for the Lady Cardinals. She also grabbed 776 rebounds, 227 of them on the offensive glass, swiped the ball 203 times, dished off 245 assists, and swatted down 187 shots.
Knepp said: “Those are pretty impressive career stats for a high school basketball player. She has left her mark on Bloomfield basketball, that is for sure. One stat that really stands out to me is that her team scored around 4,416 points over her career and Malea had 1,386 of those, or roughly 31 percent. When you score 31 percent of your teams points, you are the focus of the other team on every given night and to be able to put these numbers up while still being the focus of the other team is really special. That is also very difficult and can present a lot of pressure to know that you are never going to get a break or get a time to relax because the other team is sending one, two, or even three defenders at you. For Malea to put up these numbers while being the focus and being able to win three out of four sectionals in her career is remarkable. I’m really proud of her and what she has been able to accomplish.”

Cancellations
April showers not only bring May flowers they also cancel sporting events.
These events were rained out for Friday night: baseball: Bloomfield at Orleans; golf: Orleans at Eastern-Greene, Hidden Hills golf course, White River Valley and Bloomfield at North Knox; softball: Bloomfield at Shoals; and track: the Linton Invitational.
These events, originally set for Saturday, were also rained out: baseball: North Putnam at WRV, Linton’s doubleheader with Brown County and Castle; golf: Terre Haute South’s Bob Arnett Invitational, Rae Park; softball: Cannelton at Union; Shakamak at Eminence; and tennis: Bloomfield at the Washington Invitational.
We’ll do our best to let you know if any of these have been rescheduled.