IHSAA adopts mercy rule for football teams that need it 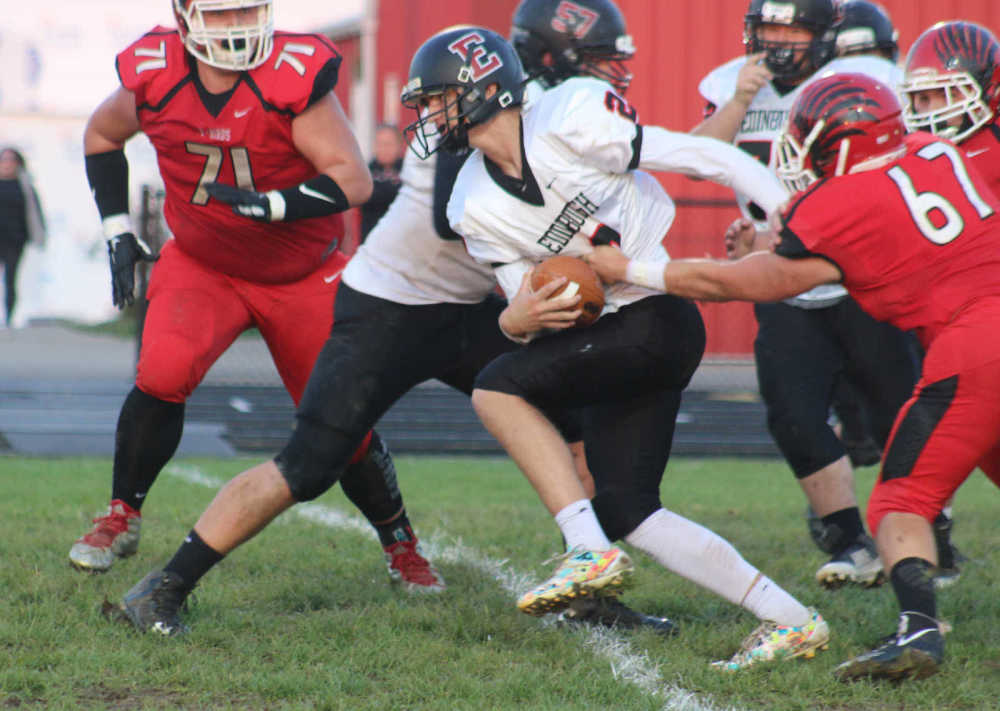 Gage Baker (71) and Dakota Vaught (67) sack Edinburgh’s quarterback last year. The IHSAA experimented with the mercy rule in that game. Baker will play this Friday night in the annual IFCA North-South game.

Porcine critters are airborne, the mountain came to Mohammed, they are ice skating in Hell.
The Indiana High School Athletic Association recently passed a rule I actually approve of.
Some of you readers may have already heard the news, but on April 30, the IHSAA approved the mercy rule for football players. According to the new rule, a running clock is mandatory for the second half once one team leads by 35 points. That means the clock will run, even if a pass is incomplete or a play goes out of bounds, with these exceptions: timeouts, scores, and injuries.
The IHSAA experimented with this rule a couple of times last season in local games.
On Sept. 28, the zebras kept the clock running in the second half as Eastern-Greene clobbered Edinburgh 57-8. Eastern led 51-0 at halftime.
A week before that, on Sept. 21, the clock ran all during the second half of Union’s 57-6 loss to Riverton Parke. The Panthers took a 50-0 halftime lead.

Reminders
Two county athletes will be playing in All-Star games over the next few days.
Gage Baker, who graduated Eastern-Greene last spring, will try to sack quarterbacks as he plays on the South team’s defensive line in the annual Indiana Football Coaches Association North-South All-Star game. The game begins, unless they push it back because of the heat, as they did last year, at 7:15 p.m. Friday, July 12, at North Central High School in Indianapolis. Admission is $8 for adults in advance, $10 at the gate. Admission for children is $4 in advance, $5 at the gate.
Linton-Stockton junior Vanessa Shafford will participate in the Indiana Basketball Coaches Association showcase for girls on Monday, July 15, at Indianapolis Ben Davis High School. The showcase lasts from approximately 2-7:45 p.m. that day. Shafford will get to play in three scrimmages. The showcase is open to the public, and admission costs $5 per person

Challenge update
Chris Franich of Worthington told me Tuesday night that he ended up 40 miles short in the Great Cycle Challenge USA.
Franich pedaled 60 miles on a unicycle during the month of June. Participants in the challenge rode 100 miles, most of them on bicycles, in June to raise money to fight children’s cancer. Franich said he raised $585 through donations to the Facebook page.
He said rain and work prevented him from putting in the last 40 miles. Franich added that the money raised will still be donated to the charity.
Next year, he may again ride in the challenge.
“I probably will, but I’ll probably do it on a bicycle unless I get a road unicycle,” he said.
Franich explained that he did the challenge on a mountain unicycle, and he would have fared better on a road unicycle which is designed to be ridden on roads.
“They’re made for going long distances and mine’s good for doing mountain bike trails,” he said. “They’re geared differently.”
I admire Franich’s attempt to raise money for cancer research. I couldn’t ride a unicycle 60 inches, much less 60 miles.