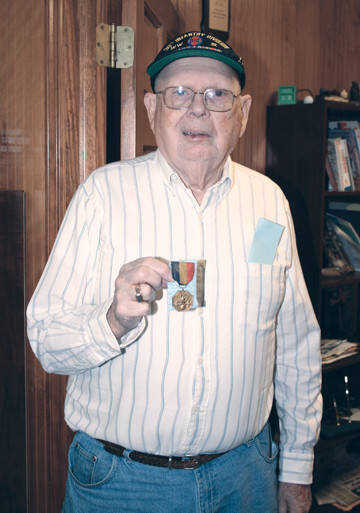 If you ever get the chance to chat with Bob Moss about World War II, consider yourself lucky.

The Linton veteran is a wealth of knowledge about that war, and the military in general. He's a walking encyclopedia about veterans in Greene County.

Moss isn't one to seek glory for himself, but he is for others. Moss has helped many area men get long, overdue medals and recognition for their efforts during World War II and other wars.

John Turchi, who passed away in 1971, served with the Navy during World War II. He was awarded the Navy and Marine Corps Medal for saving a man from drowning.

Though it was announced Jan. 10, 1947 that Turchi earned the honor, he actually never did receive his medal until years later. It wasn't until Moss took the initiative that Turchi's family actually received the medal.

Veteran's Day, which was celebrated Sunday, helped rekindle the memory of Turchi for Moss.

"For heroism in rescuing an enlisted man from drowning on the night of June 9, 1944. Under conditions of great personal danger and with complete disregard for his own safety, he voluntarily and courageously slid down a line over the side and between two ships which were surging heavily due to ground swells and a strong tide at the time, and after a considerable struggle with the man succeeded in effecting the rescue. His heroic conduct performed in the face of great danger to himself, was outstanding and in keeping with the highest traditions of the naval service."

Turchi took part in the invasion of North Africa in November 1942, and the invasions of Sicily in the European area and saw action in the Makin Islands, the Gilberts and in Saipan in the Pacific.

Turchi moved to Linton from Clinton in 1959 to work in a mine, and he and his wife Betty had three children -- Rick, John Gene, and Sheri.

Rick and his wife Linda live in Linton, John Gene and his wife Susan live in Houston, and Sheri Young lives in Clermont, Fla.

Moss -- who served with the 30th Infantry Division during World War II -- is concerned that when he passes, no one from the area will continue his quest to keep the memories of World War II alive. He's now 81.

"When I die, will anyone continue this?" Moss asked while in my office Monday morning. "That concerns me."

Moss has donated many items to the Linton Public Library, with the hope that they will be displayed for future generations to remember "The Greatest Generation."

Moss said the youngest World War II veterans would now be in their late 70s, and added that only about 10 percent of the veterans are still alive.

"What's going to happen when they're all gone?" Moss stated.

If you'd like to help Moss keep the memories of area veterans alive, give me a call and I'll let you know how to get in touch with him.