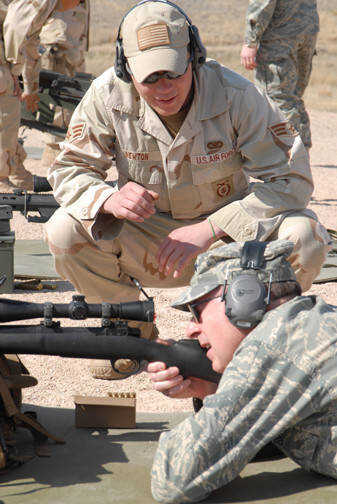 Josh Newton, a Linton-Stockton High School graduate, is a Senior Airman in the Air Force. According to his proud grandmother, Patty Poe of Linton, Newton will be leaving for Iraq in September.

William Sullivan, also a graduate of Linton-Stockton, is currently serving in Iraq. He also attended school at Bloomfield, and his wife -- Rebecca Gee Sullivan -- is originally from Sandborn.

He lives in Fort Hood, Texas, with his wife and two sons.

Sullivan was recently honored for saving "the Army $23 million by correcting errors in a database," Sullivan wrote in an e-mail.

Sullivan is the son of Betty Rogers of Stinesville, and the late Jerry Sullivan. He has been in the Army for more than 20 years, and is currently a captain. He has hopes of being promoted to major before retiring.

"We have several relatives in Greene County and they would be tickled to see the (picture)," Kathy Sullivan Duncan, Sullivan's sister who lives in Ellettsville, said in an e-mail.

Newton is an instructor for the 90th Space Wing Ground Combat Training Squadron in F.E. Warren Air Force Base in Wyoming.

He teaches close-quarters battle at Camp Guernsey. The instruction is vital to the protection of Air Force Space Command resources and people, according to the course's commander, Major Joseph Gallager.

Newton says the practice helps the security forces build a strong team that can do its mission quickly and effectively.

"You really don't think about it when you get in the situation," Newton said in an article published in the Camp's newspaper. "When you get with a team, it just starts flowing and it is a good feeling because you know those three guys have your back at any time."