Parade is a labor of love for Witty 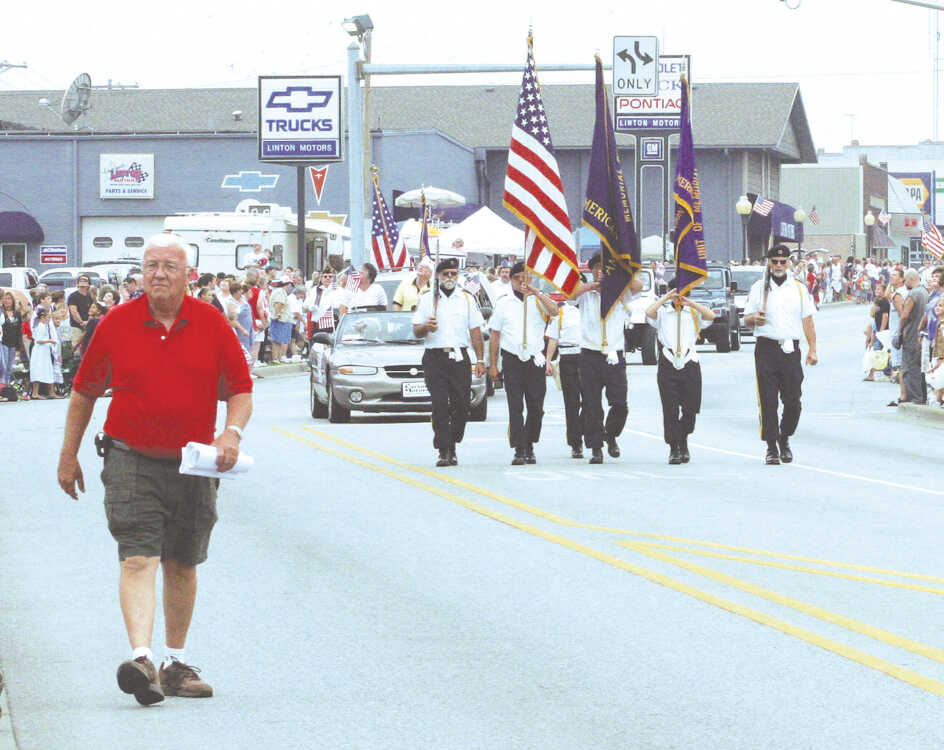 By Nick Schneider ON DUTY: Ralph Witty (left) has been in charge of the Linton Freedom Festival parade since 1970. He's pictured above walking the route of last year's parade. This year's parade will be Friday at 10 a.m.

Baseball, hot dogs, apple pie ... and the Fourth of July in Linton.

A summer wouldn't be complete without all of the above.

The annual Linton Fourth of July Freedom Festival parade is Friday at 10 a.m. It's the 103rd edition of the state's largest Independence Day parade.

It will start on North Main St. in front of Linton-Stockton High School, make its way south to A St. (State Road 54), turn east and conclude at 10th St. NE.

If the parade appears to go off each year without much trouble, it's because of all the behind-the-scenes work by the Freedom Festival Parade Committee. The man who has organized the committee since 1970 is Ralph Witty.

This is Witty's 38th parade, and he still enjoys his work.

"I enjoy it, I really do," Witty said while taking a break from preparing the Girl Scout Cabin in Humphreys Park for the annual post-parade reception. "Sometimes it gets kind of frustrating, but the good things far outweigh the frustration part of it. Our interest is to put on a good parade that everyone enjoys and no one has to start choosing sides with things. We try to avoid controversial things. We want people to sit there and enjoy the doggone thing.

"It's kind of rewarding to see grandmas and grandpas watching their grandkids in the parade."

Witty stressed that without a lot of good help from the committee and others, the parade wouldn't be possible.

"This community is really good for giving," Witty said. "Most of the time if you ask something of someone, they respond. The (Linton-Stockton) Chamber (of Commerce) and parade committee, they can't do it all by themselves. It has to be an effort from everybody."

Witty added that the city of Linton is always supportive of the parade and annual 34 Days of June activities.

"We get a lot of support from the city. The city workers, they see me coming and they say 'It's that time of the year again.' Really, they jump right in there to help, from the street department, electric department ... the mayor (Tom Jones) has been real supportive."

Organizing the parade is a year-round task. The final touches may be put on in May and June, but work starts almost immediately after the parade each year.

Witty added that with the addition of the 34 Days of June to the Freedom Festival, there's more planning involved.

"It used to be just the parade, but now there's gotten to be a little bit more with the entertainment in the park ... we've got to get all that scheduled," Witty said.

Witty has witnessed a lot of changes to the parade over the years.

"It's much larger than it was when I was a kid," Witty recalled. "But there was more local involvement in the parade than there is today. It used to be that everybody (organizations, civic groups and businesses) had something in the parade for the Fourth of July. You don't see that anymore. It's either put together rapidly or they go out and buy something. But we tend to get a lot of out-of-town businesses in our parade."

Witty noted that the committee is proud of the improvements to the fireworks over the past few years.

"We've improved the fireworks display and the way it's done," Witty said. "We have a committee for that, and John Cotter and John Hert head that up. It's better organized and we feel better about that.

"In the past, you didn't know if it was going to happen."

Though Witty and his committee can do everything they can to make sure all the details are taken care of, there's one area they have no control over: The weather.

"It's very disappointing when it rains," Witty said. "People put so much time and effort into everything, you hate to see it rain and ruin everything."

The forecast calls for a 50 percent chance of thunderstorms for Friday.

Witty said if it's raining Friday morning or there's a threat of thunderstorms, the committee will monitor the radar. If it looks like it will clear up later in the day, the parade will be moved back.