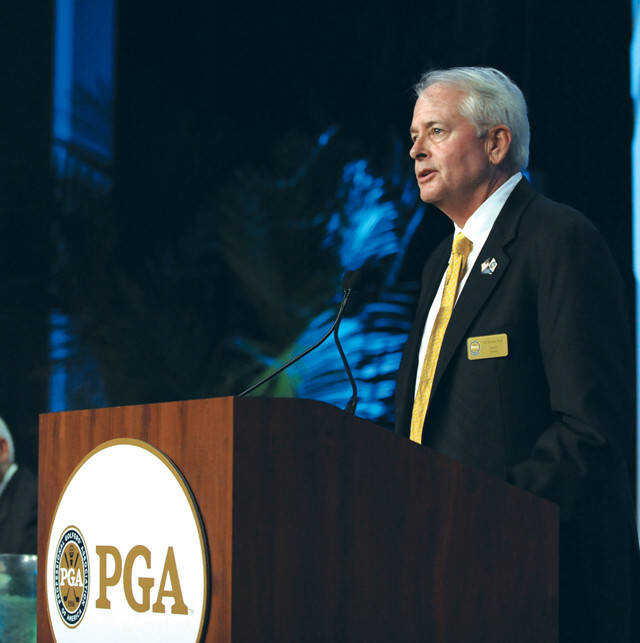 While growing up in Logansport and learning the tricks of his new trade at the Phil Harris Golf Course in Linton a few years later, Ted Bishop had no idea he would one day lead the PGA of America.

But that's what will happen in 2013-14, as Bishop was elected the PGA of America's secretary late last year in Scottsdale, Ariz.

"I never envisioned that starting out," Bishop admitted. "Even if you asked me that question 10 years ago I never would have thought that."

Bishop has made a name for himself on the national golf scene since leaving Linton in 1992. And that respect is what helped him win the election in November.

Bishop was hired by former Linton Mayor Bob Walters in 1976, and spent the better part of 17 years working as the professional and superintendent at the Phil Harris Golf Course.

He is now Director of Golf at The Legends of Indiana Golf Course in Franklin.

But Bishop's stay in Linton almost didn't happen. He actually turned the job down once because he wanted to be a golf course superintendent, and not a club professional.

"The golf professional at the municipal course in Logansport asked me how come I turned down the Linton job. He said, 'You know, you've got a skill they need and you can learn the business acumen part of the job. I think you should reconsider,' " Bishop explained.

"I've said this many, many times, when all is said and done the 17 years I spent in Linton were probably the most valuable spent in my whole career. I had the opportunity to learn a lot of things. Through my association with Phil Harris I was exposed to a lot of different people and different events. The people I worked for there were great, and there are a lot of days I wish I'd never left.

"I made my share of mistakes when I started down there. Fortunately, people were patient with me. ... I never second-guessed anything that happened in Linton."

As PGA of America secretary Bishop will be the national membership chairman, and as vice president he will serve as the national finance chairman.

As president he'll present the Wanamaker Trophy to the winner of the PGA Championship, "and appear on national TV whenever the president needs to," Bishop said.

He will be the face of the PGA of America.

As a national officer, Bishop also will be involved in selecting and announcing the Ryder Cup captain.

"And as president, I'll be the MC (master of ceremonies) for the opening ceremonies at the Ryder Cup with millions of TV viewers," Bishop added.

Nationally, Bishop has served the last two years on the PGA of America's Board of Directors, representing District 6, which includes Indiana, Illinois, and Wisconsin.

Bishop's family remains close to golf. Cindy, his wife -- and former teacher at Linton-Stockton Elementary School -- works with him at The Legends.

Bishop has now made his way to the top of his profession, and credits his time in Linton and Greene County as providing him with a solid foundation.

"My time in Linton was great. There were two guys on that golf committee that were with me from start to finish, Bud Roush and Doc Witherspoon. And Tom Wall the last 10 years or so. There were other people who served on that committee, but those three were great. That was absolutely the best golf committee I've ever had," Bishop explained.