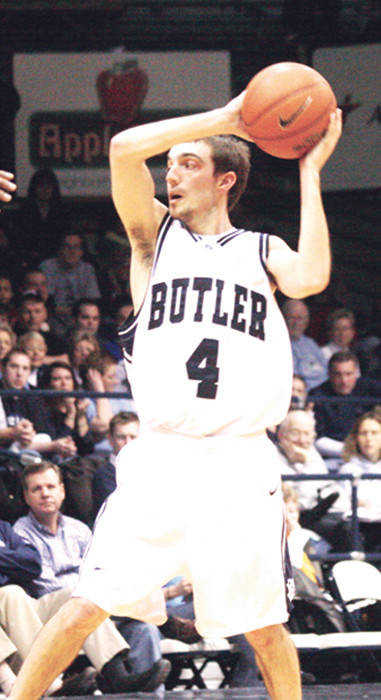 There were some who thought A.J. Graves wasn't big enough or strong enough to play Division 1 college basketball.

He proved them wrong by leading the Butler Bulldogs to the Sweet 16 of the 2007 NCAA Tournament, and finished as the school's third all-time leading scorer with 1,807 points.

Now, he hopes to prove skeptics wrong who believe he can't play professional basketball -- in the National Basketball Association or in an overseas league.

"That's a far off dream," Graves, a White River Valley High School graduate, said of playing in the NBA.

"When I was in high school dreaming about playing in college, the Sweet 16 was way out there. All the hard work and all the right timing and all the right pieces had to come together, and that was amazing (to actually play in the Sweet 16). For the NBA to come into play, I'd have to do so many things right. Just be in the right place and the right opportunity would have to come along. But nobody thought I could play Division 1."

Graves, a 6-foot-1, 160-pound guard, understands the chances of him making an NBA roster next season are slim. That's why he's willing to go anywhere in the world to showcase his talents.

He hired an agent, Buddy Baker, to help find opportunities for him.

"I'm actually going into this knowing I'll pretty much have to go overseas (to play). I really would not mind going over there. It would be a great experience to be able to see the world, get to live in a different culture and see how things are done and play a sport that's become universal," Graves explained.

Graves hasn't played competitive basketball since the Bulldogs were eliminated from the 2008 NCAA Tournament his senior year. But he's trying to make up for lost time.

"I've been working out at the St. Vincent's Sports Performance Center. A lot of professional athletes go there for training, and so do college and high school athletes," Graves said. "It's really a great environment to work in. I've been there six or eight weeks.

"It's going well. I've obviously been sitting for the last six months, so the first few weeks were an uphill climb. ... I'm starting to see gains."

Why go through all the long hours for a comeback?

"(Playing basketball) is something I missed. A year ago when I decided to close that chapter in my life, I knew I could still play. I wanted to move on with another challenge for myself and went a different way," Graves recalled.

"But probably over the winter, when the season really started getting into it for college and high schools, I started playing with the Butler guys again and in leagues in Indy. I realized how much I really enjoyed playing."

Graves has been doing a lot of research on the different professional leagues around the world. He wants to make sure he finds the right fit.

"I didn't do much research (after he finished college). I pretty much ran away from it. I've spent the last two months researching what kind of athletes play here and there, and what kind of league it is. There are top leagues, middle leagues ... which league is best for me? I've looked at all that the past couple of months," Graves explained.

Graves currently works at AIT Laboratories as a business analyst. The company provides lab science in pharmacology and toxicology. Graves says the company has been great to work for and understands his desire to still play basketball.

"My managers knew about this a couple of weeks ago," Graves said. "I love working here, and I love the people I've met. This is a great atmosphere to be in.

"You never know, no team may want me or I might end up spraining an ankle. I still want to work here. They've been very good about supporting me. This is a family oriented atmosphere, and the company wants to see their individuals reach their dreams."

Over his final two seasons at Butler, in 14 games against the nation's best teams -- in the NIT Preseason Tournament, Great Alaska Shootout, Wooden Tradition, and NCAA Tournament -- Graves averaged 19.9 points a game.

If Graves signs with an European league team, he will join five other former Butler players there -- Mike Green in Turkey, Brandon Polk in Finland, Thomas Jackson in Sweden, Pete Campbell in Germany, and Brandon Crone in Poland.

Chris is the general manager/editor for the Greene County Daily World. He can be reached by telephone at 847-4487 or by e-mail at cpruett79@hotmail.com .