WRV teacher goes above, beyond to help students in need 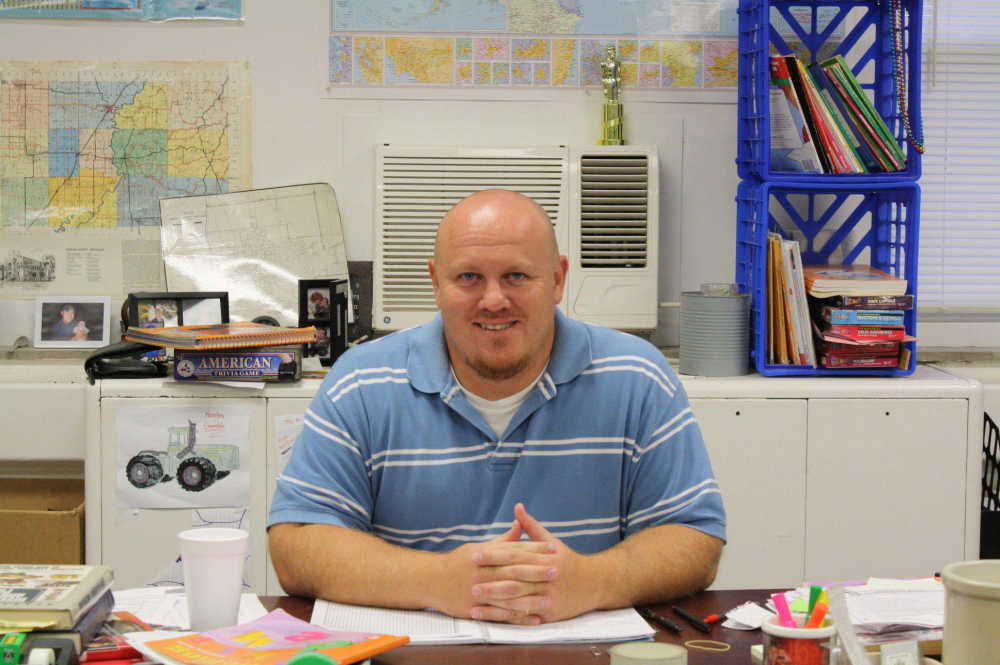 What he dealt with Friday on his way home from school tested his human skills. The skills needed to remain calm during a crisis situation.

Franklin was on his way home to Linton on Terre Haute Road, at about 3:20 p.m., when he came upon some stopped traffic near Terrell Hill (County Road 500 West).

"I could see the smoke. Initially I thought someone was trying to burn something," Franklin recalled.

"In front of me was James Stone, and we could see a car turned over."

Four teens in a vehicle driven by Trayson N. Westray, 16, of Worthington, were injured in an accident just seconds before Franklin arrived.

According to Indiana State Police Trooper John G. Yung, Westray was traveling east on Terre Haute Road when he lost control of his car and ramped the hillcrest.

The vehicle skidded off the south side of the road into a yard before ramping a driveway and becoming airborne. The car struck three pine trees while in the air, and then came to rest on the passenger side.

When Franklin and Stone went to check on the passengers, they were all out of the vehicle but inside the area with the pine trees.

"We tried to get to the kids, but there were so many pine trees," Franklin recalled.

Franklin and Stone then held up branches so the students could get out.

The passengers were Halie E. Hutcherson, 17, Kaylee B. Raybern, 15, and Taylor Hoover, 15. All are from the Worthington area.

Franklin either had all the students in class or had a family member in class.

WRV Worthington Principal Kevin Keller said it's good to know he has a teacher in his building who can react quickly during a crisis.

"We're pretty proud of Wes. Wes talked to the parents of the kids involved yesterday (Monday), and they were very appreciative of what he did," Keller explained.

"When they showed up on the scene, Mr. and Mrs. Hoover said he was on the ground holding her hand. They said it was very reassuring that he was there."

Franklin -- who has taught at Worthington for 12 years -- is a member of the school's Crisis Response Team, which is a subcommittee of the corporation's Safe School Plan.

"His role is part of the parent network, providing information to parents wanting to know about their child's welfare during a crisis," Keller said.

Franklin said the students were out of the vehicle when he and Stone arrived, but there was smoke.

"And where there's smoke, there's fire. Since they were all out, we wanted to get them away from the car as soon as we could. We moved them across the road where my van was," Franklin explained.

Once the two men assessed the situation, Stone left the scene with his son.

"James took his son home. (The son) was pretty upset. That's a lot for a kid to see," Franklin said.

Franklin remained on the scene a while longer.

"I just kind of sat there with them, tried to calm them down. All three girls I had in class. The boy ... they just moved here, and I have his younger brother in class," Franklin said.

Franklin wasn't the only person at the scene helping, and two other WRV teachers -- Debbie Nolting and Christine Brown -- were also involved. Nolting came upon the scene after Franklin, and Brown went to the hospital when she learned of the accident, as did Nolting.

Franklin also went to the hospital.

"It was good to see them and make sure they were OK," Franklin said.

Franklin, the father of four young children, said it was difficult to not think about his own children while he was at the scene.

"They were all wanting their parents, and I did think about my kids wanting me and me not being able to be there. That's not a good feeling," Franklin said. "That got to me later on."

Franklin, an assistant football coach at Linton-Stockton High School, didn't attend Friday's game at Union. He said he spent time with his family instead.

"I was ready to go to the game, but I thought it probably was best to miss it," Franklin recalled.

More from this blogger · Chris Pruett
Comments
View 6 comments
Note: The nature of the Internet makes it impractical for our staff to review every comment. Please note that those who post comments on this website may do so using a screen name, which may or may not reflect a website user's actual name. Readers should be careful not to assign comments to real people who may have names similar to screen names. Refrain from obscenity in your comments, and to keep discussions civil, don't say anything in a way your grandmother would be ashamed to read.
Respond to this blog