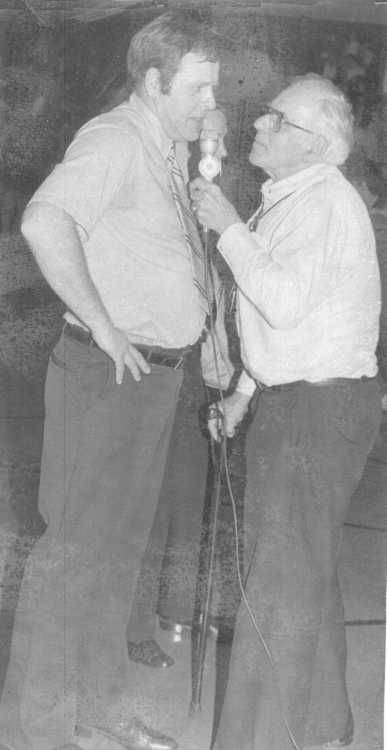 If you're an Indiana high school basketball or Indianapolis 500 fan, you know the name Tom Carnegie.

He was the long-time public address announcer for the Indiana High School Basketball Association's state finals, and the PA man for the Indianapolis 500 for 60 years.

In the movie "Hoosiers" he was the announcer who said, "And now, the starting lineup for the Huskeeeeers."

He also served as sports director for WRTV-TV (originally WFBM-TV) in Indianapolis for 32 years.

It was with Channel 6 that I remember Carnegie. He was "The Man" when it came to reporting on high school basketball. If Carnegie came to report on your game or team, it meant it was a big game.

His passing brings back a lot of memories for sports fans, and Tom Oliphant of Bloomfield is no different.

Oliphant, coach of the L&M Dream Teams in 1983-84 and 1984-85, had the chance to be interviewed by Carnegie after one of his games. It was an honor, he recalled this week.

The game was a thriller. L&M took a 23-16 lead after the first quarter and then held on for the victory. Tony Patterson had 26 points, Jeff Oliphant 21, and Randy and Riley Padgett had nine each.

This game was special. It wasn't because it was David vs. Goliath. It was David vs. David. Two small schools, with enrollments under 200, ranked in the top 20 (under the older single-class system) battling each other before a packed house.

Carnegie saw the potential for a classic, and he made his way to Greene County.

It wasn't easy getting in to the Switz City gym that night. The day before the game L&M Principal George Brown announced the game was already sold out.

It was reported in the Thursday, Feb. 23, 1984 edition of the Bloomfield Evening World that the crowd was believed to be the largest ever at the legendary gym.

I covered the game for the Linton Daily Citizen, and it was an interesting night. I had to park about a block or two away from the State Roads 67/54 junction. Cars lined the streets of Switz City.

"It was overwhelming in a way. Our timer, Glenn Sparks, has seen every game played in this gym and he thought it was the largest crowd ever," Bill Thompson, the Switz City basketball coach and athletic director was quoted as saying the following day in The Evening World.

By the time Thompson's Tigers took the floor for practice after school, there were several hundred people in the gym selecting their seats.

Oliphant said before the junior varsity game started the gym was full.

You couldn't walk around the top because it was packed, and people were sitting on the floor around the court.

If the state fire marshal had showed up the game might have been canceled.

Oliphant was interviewed by many newspapers, TV stations, and magazines during L&M's two-year run, but none touched him more than the one with Carnegie.

He called last week and later brought in a photo of himself being interviewed by Carnegie. We talked about how much that meant at the time.

I shared with him my Carnegie story, and he suggested that I write about it in this column.

It was 1978, and Eminence had just won its second sectional ever with a victory over Bloomington North at Martinsville. Marcus Debro was the star for the Cougars, and Greene County fans probably know him today as a referee. He did Linton's game with Clay City on Tuesday.

Carnegie came to Eminence after the sectional win to interview our coach (Jim Coon) and star player (Doug Gore). I remember being in the gym when Carnegie came in, and it was like Howard Cosell was in the house.

We later gathered as a team to watch the interview. It was one of the memories that made winning the sectional special.

Carnegie didn't play to the camera like today's ESPN sportscasters do. He understood the story wasn't about him, but the players and coaches who played the game.

And who could ever forget his "... annnnnd heeeeeeeeeeee's ON-IT!" and "... race fans, you are not going to believe this .... iiiit's a nnnnnnewwwwww traaaaack record!" at the Indy 500.

Carnegie was a Hoosier legend.

More from this blogger · Chris Pruett
Comments
View 4 comments
Note: The nature of the Internet makes it impractical for our staff to review every comment. Please note that those who post comments on this website may do so using a screen name, which may or may not reflect a website user's actual name. Readers should be careful not to assign comments to real people who may have names similar to screen names. Refrain from obscenity in your comments, and to keep discussions civil, don't say anything in a way your grandmother would be ashamed to read.
Respond to this blog