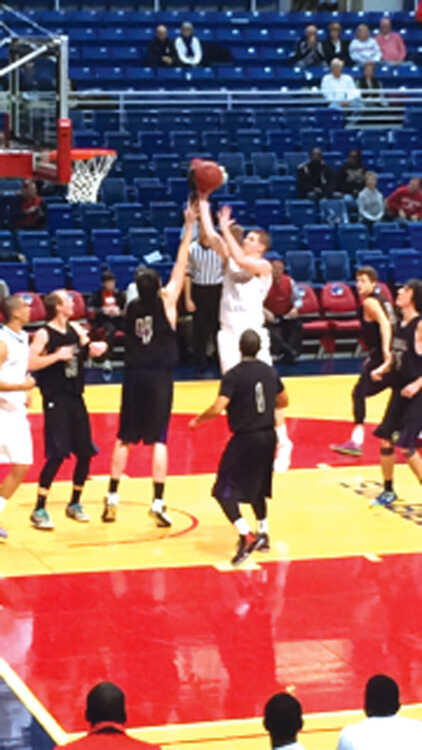 Austin Karazsia puts up a jumper for the University of South Alabama in its season opener against Carroll. Karazsia is a sophomore for the Jaguars. (Submitted photo)

The past two boys basketball seasons for Linton-Stockton High School were memorable for many reasons, and another season is about to get started.

Two years ago the Miners advanced to their first state championship game, losing the 2A title game to Bowman Academy in Banker's Life Fieldhouse. Last year's squad came within a last-second shot in regulation in the regional at Southridge of advancing to another semistate.

Some key returnees and some new players have the Linton faithful excited again this year about Coach Joey Hart's team.

Austin Karazsia's performance in the state tournament two years ago opened a lot of eyes of college coaches, and the Linton graduate earned a scholarship to the University of South Alabama to play for Switz City-native Matthew Graves.

Karazsia, a 6-foot-8 sophomore, has played in one of USA's two games so far this year. He saw extensive action in its exhibition.

He scored 2 points and pulled down 3 rebounds in an 83-64 season-opening victory against Carroll, and didn't see action Monday night in a 68-59 setback at Southern Mississippi.

In the exhibition game, AK had 7 points and 2 rebounds in 20 minutes of action.

The Jaguars play at Detroit on Saturday, and have some big games coming up after that. They include: At ACC power Miami, Fla., on Nov. 28; at Malibu, Calif., to play Pepperdine on Dec. 15; at Richmond, Va., on Dec. 18 to face the Spiders, and Dec. 20 they play in Indianapolis against IUPUI. That game starts at 1 p.m. and will be played in the newly renovated Pepsi Coliseum at the Indiana State Fairgrounds.