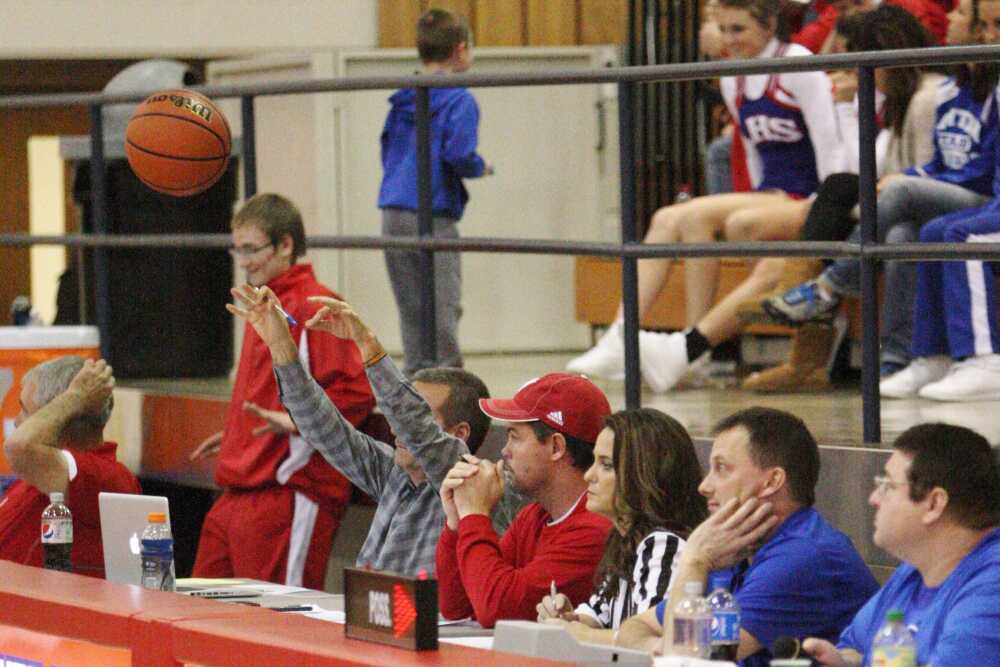 Greene County Daily World Publisher Chris Pruett throws the basketball back to an official at the Linton vs. Owen Valley game on Friday night. To Pruett's left is Linton scorekeeper Chriss Jobe and to his right is Linton assistant coach Joe Hart. Pruett said he enjoyed listening to Hart's "clever remarks" before and during the game. (Photo by Shad Cox)

Some odds 'n' ends as we prepare for another Christmas season.

While watching 60 Minutes this week there was a segment on Dr. Patrick Soon-Shiong. He's on the cutting edge of cancer research and claims to be on the verge of some break-through answers when it comes to fighting and curing cancer.

He claims his research can eventually turn cancer into "a chronic disease" and people can be cured.

It was interesting and provided hope for millions.

One statistic really caught my ear: 1,500 people die from cancer in the United States every day. That's EVERY day.

The show will celebrate its 50th anniversary Tuesday when CBS-TV airs Rudolph at 8 p.m.

In a recent poll of favorite Christmas shows, Rudolph was voted No. 1.

I must admit I'm a big fan. For anyone who knows me well that's not a secret. If you look hard enough in my Linton office you'll find some Rudolph knick-knacks.

Linton won 36-34 on a last-second offensive rebound put-back by Pierce Jackson. It wasn't an offensive masterpiece by either team, but the Miners executed down the stretch and that pleased Coach Joey Hart.

For me it was sort of like old times. Hart's father, Joe, serves as a volunteer coach for the Miners. Hart coached Union High School for years, and had many successful teams. When I was sports editor for the former Linton Daily Citizen I covered dozens of Hart's games.

He was a sports writer's dream when it came to quotes and clever lines.

Friday night he had another classic. It was right before tipoff and had something to do with the officials. I won't share, but if you see Joe you might ask him what he said. I guarantee you'll laugh.

A big pat on the back to Greene County Daily World Editor Anna Rochelle for her scoop concerning murder suspect Jorrell Houldson.

Her first story appeared in Saturday's paper, and another story will be published this week.

The Cardinals are off to a 4-0 start and will try to run their record to 5-0 on Friday night when they host Clay City.

I know it's probably too early to talk about the sectional, but the Cardinals appear to be headed for a good season.