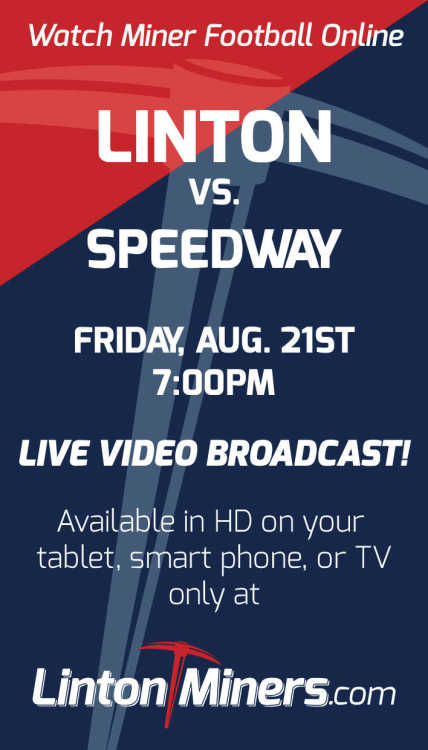 It's hard to believe anyone would question the popularity or importance Linton-Stockton High School's football program plays in the community.

If you uncover a doubter, take them by any place in town that serves breakfast and you'll find several Monday Morning Quarterbacks discussing Coach Brian Oliver's team. It can be May or June or it could be in the heart of the season. It doesn't matter.

The Miners have been on a roll since the late 1970s, and with the exception of a season here and there, have been one of the best -- if not THE best -- southern Indiana Class A programs.

They've won eight regional titles during that time, and are on a roll of four straight sectional titles. That's the longest such streak in program history.

Not all fans can make it to Roy Williams Field or away games to watch the Miners, and there are fans spread out across the region, state and country who would love to watch Oliver's team play.

The Greene County Daily World is partnering with Jared Albright and the Linton Community Development Corporation to help bring Linton football games live and free on the Internet. The first game will be this Friday when the Miners play host to Speedway starting at 7 p.m. at Roy Williams Field.

LCDC is a 501(c)3 nonprofit, and has been producing live video broadcasts of select football games with the support of local school administration, coaches, and sponsors for the past five years.

"What began as somewhat of a science experiment and a labor of love has turned into a widely popular method for Miner fans all over the world to experience the Friday night tradition that is Miner football," Albright said. "Linton-Stockton High School had the honor of being one of the very first schools in Indiana to have their very own professional video broadcast that has drawn as many as 2,000 viewers for a single game."

The newspaper will be the promotional arm of the partnership, and Albright and his crew will handle the production side of things. They have a long history of producing Linton football games, and have it down to a near science. They have some top-notch equipment, and invested in fast Internet speeds so the home games can be produced in HD quality.

"We are excited to partner with Jared and LCDC to bring Linton football to those fans who can't make it to games," Greene County Daily World General Manager Christy Lehman said. "We don't want to provide a reason for fans not to attend the games. Our goal is to help bring it to those area fans who can't attend for whatever reason, and for those fans who live outside the area and state who never get the opportunity to watch the Miners play."

Albright and his team -- Derrick Tennant, Nolan Spinney, Josh Liechty, Tony Tadey, and Charles Garwood (past member) -- had a dream of live streaming events and it became a reality.

"With recent investments in new technology, all home games will be offered in full, high-definition video, something that very few Internet broadcasters in the state can offer," Albright said. "The LCDC is dedicated to continued investment to provide the highest quality broadcast that can be offered. Plans are currently in the works to release a smart phone app later in the season, to be available for Apple or Android phones that will allow viewers even more convenient access to the broadcast."

The Linton Community Development Corporation was founded in 2011 to promote arts, music, and culture and enrich life in Linton and the surrounding geographic areas. The members of the LCDC produced the Linton Music Festival from 2005 to 2013 and currently manage several digital properties including TheLintonian.com and LintonMiners.com. To learn more, visit LintonCDC.org.

To watch the football games will be simple. There's an ad on the upper left hand side of the GCDW's website home page. Click on the ad, and it will take you to a landing page that will explain who's producing the event. You will find a link you can click to view the game.

You can also access the broadcast by logging onto LintonMiners.com and view the live video on your smartphone, tablet, or TV. Accompanying the live video is a full play-by-play provided by radio broadcaster Keith Doades of Media Five Sports and former Lintonian and Miner football alum Dan Phillips.

If you can't attend the games, be sure and watch on the Internet.

Chris is publisher of the Greene County Daily World. He can be reached by email at cpruett79@gmail.com or by telephone at (812) 847-4487.