Coach Hart: ‘No stage is too big for them’ 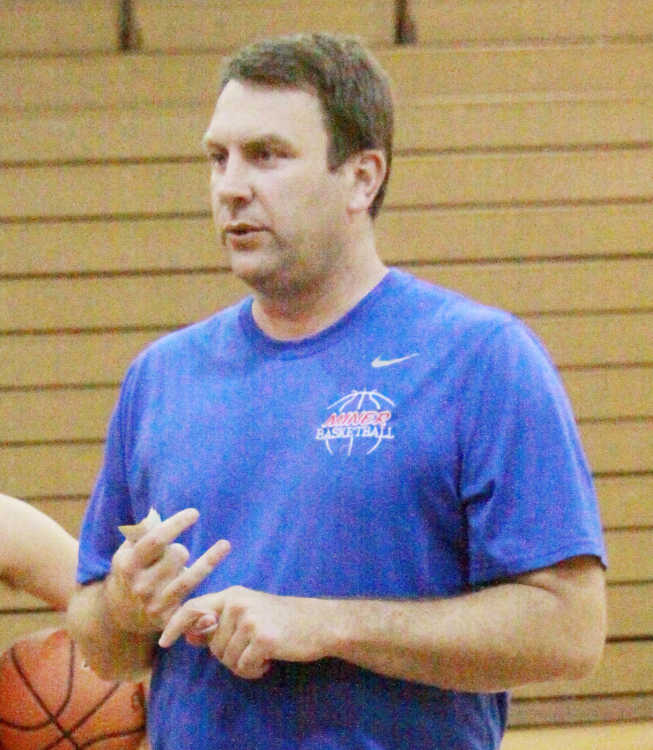 Anyone who is familiar with Joey Hart knows his dad has had a big influence on his coaching career.

The senior Hart coached 20 years at Union High School in Dugger and led the Bulldogs to four sectional titles, and had a great run in the 1997 state tournament before losing to eventual-state-champion Bloomington North 62-51 in the Terre Haute Regional championship game.

“Obviously I got into coaching because of my dad,” Hart shared with me earlier this week. “I was basically raised into this. It’s something I always wanted to do.

“It’s probably not a coincidence that we didn’t turn it around at Linton until he started helping us in ’13. If you ask him, he’ll tell you he’s the reason. And he’s got a little bit of a point.”

The elder Hart has been on the Linton bench as an assistant since the 2012-13 campaign, the year the Miners advanced to the Class 2A state championship game before losing to Bowman Academy, 86-73.

But it was some advice from Joey’s mother, the late Janet Hart, that actually helped him get his first varsity coaching job.

“I applied for the Eastern (Greene) job but hadn’t applied for the Shakamak job. Eastern had Mark Barnhizer and they had been really good,” Hart recalled. “At that age I wanted to be the head coach at Eastern. I didn’t understand why everyone didn’t want to hire me.”

The extent of Hart’s coaching experience at the time was one year as the junior varsity coach at Union while he did his student teaching and received his degree from Indiana State University. He had just completed his first and only season of coaching the freshman team at Evansville North High School.

“I remember my mom saying, ‘You applied for the Eastern job. Why wouldn’t you apply for the Shakamak job?’ It’s really something that has stuck with me forever,” Hart recalled.

“I told her that Eastern has players who can win right now. But she challenged me. She said she understood, but she said anyone can coach (good and experienced) players. It wasn’t what I wanted to hear at the time, but it was what I needed to hear.”

The rest, as they say, is history.

Hart enters the Class 2A state championship game against Andrean on Saturday with a 325-186 overall record in his 21st season as a varsity head coach. That ranks him as the 38th winningest active coach in Indiana high school basketball.

His Miners take a 27-3 record into the contest at Bankers Life Fieldhouse starting at 12:45 p.m.

“It was a strange deal. That last year at Turkey Run, we had been to the sectional final four years in a row (and lost all four) and we lost two sectional finals at Shakamak,” Hart recalled. “People were saying how are you 0-6 in sectional finals?”

Hart’s teams ran up against some outstanding individual players and teams during that run that kept them from advancing.

“When we lost the last one at Turkey Run, and it’s easy to say now, but I was on the bus and I knew I was the AD, but I had a strong feeling that was my last game coaching there,” Hart said. “I told a couple of my assistants, we’re done.”

Hart wasn’t looking to coach again when the Linton job opened up when Darren Clayton stepped down.

“I wasn’t going after the Linton job. Brooke (his wife) finally got on me. ‘You’re not going to apply?’ That was a Tuesday afternoon and the deadline was Wednesday,” Hart recalled. “I said, ‘OK, I’ll apply’.”

Hart added that Linton Athletic Director Charlie Karazsia got his information about five minutes before the deadline.

“I think he gave me a courtesy interview,” Hart joked.

“Somewhere along the line as I was heading down (State Road) 59 to Linton, the competitive juices took over. I’m at least going to get them to offer me the job.”

Hart has taken Linton’s basketball program to a new level when some said that couldn’t happen. How many times have you heard this? Linton is a football school.

“When I got here I had unbelievable support from Steve (Weber, the football coach) and Matt (Fougerousse, the baseball coach),” Hart said. “Charlie and Nick (Karazsia, the former superintendent) got me the opportunity. But everybody said you couldn’t win because of football.

“Steve Weber and I were in contact before I even interviewed. He was adamant that I put that to rest. Brian (Oliver, the current football coach) has been great to work with too.”

The key to Linton’s success under Hart has been the coach’s ability to use what talent he has available. He doesn’t try to make every team play the same style.

“Those first couple of years we had big guys (Austin Karazsia and Dess Fougerousse) who were mobile. We were very hard to play against and scout,” Hart said. “We’ve still tried to do that the last several years. We’ve played many different styles.

“We do whatever is best for that team. That being said, we try to make ourselves unscoutable if possible.”

Hart taught math the first few years at Linton, though has been in the private sector since. He’s currently a business development manager and salesman for Electro Enterprises, Inc. He spends time on the road, and left for Savannah, Ga., early Sunday morning and returned Tuesday.

His organizational skills work well for him off the court too.

“Austin and Dess’ group changed my career,” Hart said. “This (year’s team) is as hard of working kids as I’ve ever had. And they’re nice kids and very enjoyable to be around.

“When we went into the gym Saturday (for the semistate) it was a reality. It wasn’t a dream. That’s all because they knew it could be done because of that ’13 team. We’ve got guys who are winners and expect to win. No stage is too big for them.”

The same could be said for their head coach.

Chris is publisher of the Greene County Daily World. He can be reached by email at cpruett79@gmail.com .