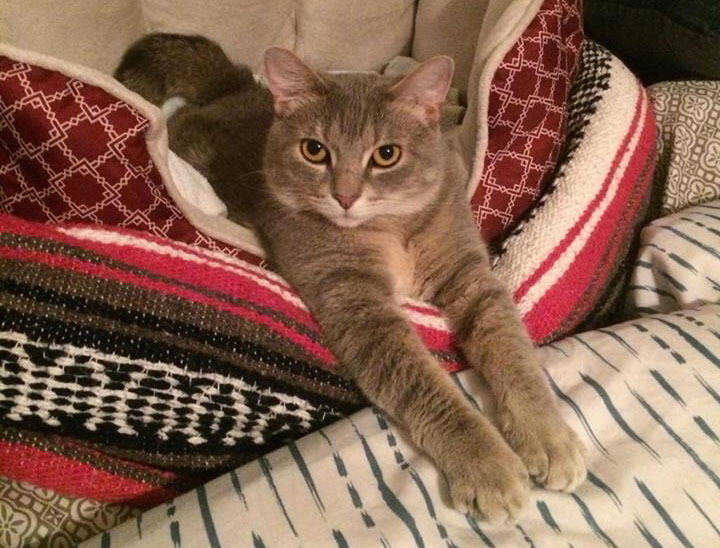 In this series, we will highlight Greene County citizens who sacrifice their time to help animals. We will start with the animals people are closest to--our indoor pets. We will also discuss the mental and physical health benefits of caring for a pet and addressing the myths that discourage people.

Although the series was created to give thanks to humans who rescue pets, sometimes it’s the other way around. In this edition, we will highlight special needs cat named Gracie who helps her human on a daily basis.

Six-year-old Gracie is an American Shorthair cat who was paralyzed from the waist down after being pulled into a dog enclosure as a three-week-old kitten. Lindsey Harrison’s then-boyfriend’s father stepped in to rescue the kitten and called Harrison, knowing she had a soft spot for animals. She relived the day when the Daily World interviewed her in 2017. She recalled the kitten, barely alive, and the bleak phone conversations with veterinarians who said euthanasia was the only option.

“I had to try,” said Harrison in February. “There was just something special about her.”

Harrison hit the books and alongside her tiny patient, she earned a crash-course degree in veterinary medicine; saying she learned the entire feline anatomy and found resources on how to manually stimulate her tiny kitten’s bowels upon realizing she could not go to the bathroom on her own.

“By the grace of God, she found the one person in Jasonville who was crazy enough to do whatever needed done to save her life. She’s been my Gracie ever since,” Harrison said on deciding Gracie’s name. Gracie was out of the woods, but she was not clear. Dr. Royer from Worthington would later perform a hysterectomy on Gracie after extreme infection was discovered in her reproductive organs. Veterinarians looked at X-rays, revealing the injuries she suffered as a kitten, and marveled at how healthy Gracie was in spite of it.

Gracie’s recuperation after the health scare coincided with a dark period in Harrison’s life. Illness, the loss of grandparents to cancer and a divorce in Harrison’s family left Harrison feeling as if she couldn’t go on--but after Gracie appeared to Harrison in a dream, encouraging her, Harrison certified her beloved cat as an Emotional Support Animal. They are now inseparable.

For this column, Harrison was asked a simple question: Why is a pet more than just a pet?

“Gracie is more than just a cat to me,” Harrison said. “She has literally given me the same gift I have given her--a chance at life.”

According to WebMD’s “5 Ways Pets Can Improve Your Health,” there are numerous ways that pet owners benefit in terms of both physical health and mental health. Pets have been shown to improve blood pressure and anxiety levels, and children who are raised in a home with pets are less likely to develop asthma and allergies--contrary to long-held myths. Owning a dog can help alleviate social shyness and even get you a date.

For Alzheimer’s patients, the presence of a feline or canine companion can result in fewer anxious outbursts, as well as exercise and companionship for senior pet-owners in general.

Cuddling and playing with your pet releases seratonin and dopamine, “feel good” chemicals in the brain.

Other miracle benefits promised by pet-ownership include lowered chances of heart disease and longer survival rates for heart attack patients.

Although pets are NOT for everyone, these observations should give households on the fence about owning a pet the motivation to take in a friend.

Harrison says that Gracie has given her patience, strength and unyielding trust. She could not imagine life without Gracie and is forever in her debt.

“The past seven years have not been easy, for either of us. But without each other, we wouldn’t be here. A lot of people say ‘she’s just an animal.’ To me she is so much more than that,” said Harrison. “If I had given up on her, when everyone else wanted to, and doubted a little cat would have so much strength, I wouldn’t be the person I am today. Pets can heal your heart and your soul. Their loyalty, and their trust, can mean the difference in losing yourself in the darkness, or finding your way to the light. She led me to the light. And I will forever be in her debt.”

Kristen Inman is a staff writer at the Greene County Daily World. She can be reached by email at Kristengcdw@gmail.com or on Twitter @kristenkilker.