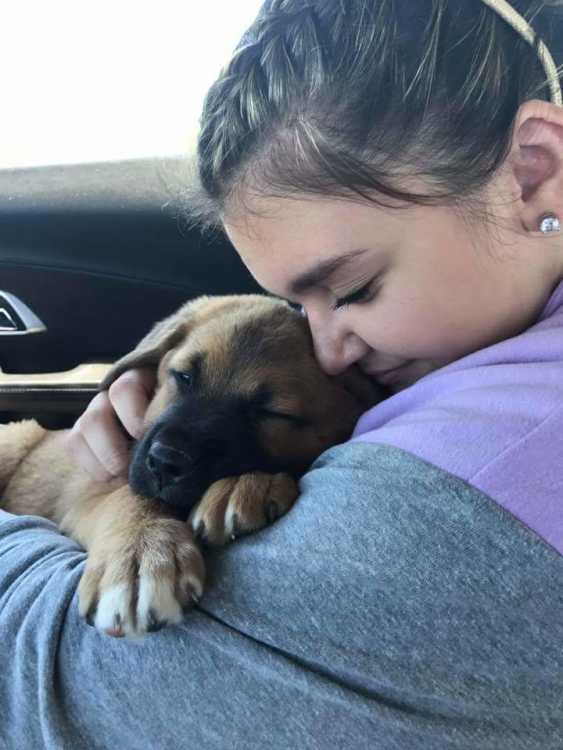 (Courtesy of Charla Byers) Laika was adopted by a family from Michigan who traveled six hours to meet her.

In Part 1, we met a partially-paralyzed cat named Gracie who saved her owner Lindsey Harrison in return for saving her as a kitten. In this installment, we will gain perspective on shelter and rescue workers on why they choose to help animals, the responsibilities of owning a pet and the things they wished other humans knew about pet ownership.

Michelle Chapman has been executive director of the Greene County Humane Society since June 2016.

“Pets are a commitment and a responsibility,” Chapman said. “They require more than just food and water. They need vet care, love and attention.”

After change of management, the humane society updated their policy to in order to become a low-kill shelter, meaning they do not euthanize for space, and the humane society and S.A.F.E Animal Rescue were able to join forces for an October adoption event at Frightmares Haunted House. Dogs greeted haunt-goers at the ticket booth with wagging tails, and fittingly a fuzzy black kitten, rescued en route to the adoption event, was kept safe and warm inside the ticket booth with a pan of Kitten Milk Replacer.

Charla Byers, Director of CARE Inc. (CAnine REscue) and former rescuer for S.A.F.E, says she has always done rescue in some form or another but after Byers’ adult children left home, she says she developed “empty nest syndrome” and felt lost.

“Being able to rescue, love, care for and then home a helpless, hurting creature gave me back a sense of purpose,” Byers said. “Of course I get them vetted, I feed and house them. But it’s the loving them....and them loving me back.... that makes the most difference.”

According to the ASPCA, approximately 6.5 million animals enter shelters in the United States every year, and 1.5 million of those animals are euthanized. These numbers are improvements on previous years. The amount of cats and dogs that are admitted to shelters is roughly equal, but cats are euthanized more than dogs. The improvement in numbers is attributed to a rise in adoptions and more strays being successfully reunited with their owners. Stray dogs are eight times more likely than cats to be picked up by their owners from the shelter. According to the American Pet Products association, dogs are more often bought through a breeder than a shelter, and cats are more often obtained through shelters.

Chapman says the most common reason people give for surrendering to the shelter include having to move, not having time, and not spaying or neutering.

“Spaying and neutering is important because it helps control the pet population and it also has health benefits. Inside pets need spayed or neutered too. It will again have health benefits and keeps your pet from trying run off to breed.”

According to the ASPCA, surrendering due to ‘pet problems’ accounts for 47% of rehomed dogs and 42% of cats. These problems are defined as “problematic behaviors, aggressive behaviors, grew larger than expected, or health problems owner couldn’t handle.”

One of the hottest debates, at least in regard to cats, is the topic of declawing. Often done to save furniture and finishings from the animal’s need to trim their claws through scratching, declawing has become problematic because veterinarians say it is comparable to amputating a human’s fingers at the knuckles. Pain, coupled with the animal’s feeling that it cannot defend itself, leads to a multitude of behavioral problems that can land it in the shelter, such as marking, inappropriate urination and defecation and aggression.

“I have never had a cat declawed myself and I never will,” said Chapman. “The ones that I have been around that are declawed have all different behaviors.”

Chapman says the best way to help curb pet overpopulation and make the jobs of animal heroes easier is to donate to shelters and rescues you support, join TNR efforts, and consider opening your home to foster pets to relieve space issues in a shelter.

TNR--or Trap, Neuter (or Spay) and Return--involves trapping stray cats, “fixing” (or sterilizing) them, and usually marking them by painlessly clipping the tip of the ear to indicate to people in the community that this cat is part of a TNR cat colony. While less ideal than giving these animals an indoor home safe from traffic and other dangers, it gives them a better shot at life than they would have without intervention. The Greene County Humane Society, after high intake rates for the season, are considering having a call-out for more owners who would be interested in offering their homes to shelter animals.

“We’ve only used fosters a couple times in the past for senior dogs but the way things are going with our intakes right now, it would be very beneficial,” says Chapman.

In December of 2010, 122 dogs were rescued from a Bloomfield puppy mill after the Indiana attorney general received a tax-evasion complaint. Responders found hundreds of dogs--Maltese, Shih Tzus, pugs and poodles--crammed in small wire cages in a dirty mobile home.

The people who unwittingly support puppy mills don’t see these conditions, but rather have purchased their dogs online or at a pet store.

The term “Puppy mill” does not refer to all breeders, but is definied by the HSUS as “a dog breeding operation, offering dogs for monetary compensation, in which the physical, psychological and/or behavioral needs of all or some of the dogs are not being consistently fulfilled due to inadequate housing, shelter, staffing, nutrition, socialization, sanitation, exercise, veterinary care and/or inappropriate breeding.”

An animal taken out of a puppy mill is still an animal saved, but it is important to hold these establishments accountable to prevent further suffering. If you purchase a sick puppy or another dog you believe came from a breeder that meets the definition for a puppy mill, you can file a complaint with the USDA through their online form.

Still, while responsible breeders exist, the demand for certain breeds also drives the demand for these puppy mill operations. Still, we live in a country where millions of pets are in danger of euthanasia and can be taken home for a fraction of the cost--and if one can afford to give an animal the nutrition and veterinary care it needs, the adoption fee is only a small upfront cost.

“It makes me sad when someone states they are going to let their animal have babies so they can have one from the litter, or because they just want to do it once,” said Byers. “Rescues and shelters are full of animals from those ‘just because’...or, in other words, ‘don’t care’, people.”

Byers also addressed myths that female animals “calm down” after having a litter, or that male animals hunt better if left unneutered. In “Myths and facts about spaying and neutering,” The HSUS dismantles many other myths and common reasons for not fixing animals--including the idea that it is “better” to let a mother cat have one litter before she is spayed, that fixing a dog will make it less effective as a guard dog, or even that fixing your male pet will ruin his ego and make him feel “un-macho.” One female cat can give birth to more than 100 kittens in its lifetime and a female dog can have six to ten puppies up to twice a year.

Byers would also like to see people adopt more adult pets. Shelters who euthanise for space can be especially dangerous for senior cats and young kittens, which both require special care.

“With adults, adopters will know what they are getting,” Byers said. “People will know the animals permanent size, weight, height, and personality. Puppies are cute, but they chew, grow, change in personality, and then there’s the potty training issue...”

Over the year-and-a-half that CARE, Inc. has been in operation, Byers cannot believe the cruel acts toward animals that go unpunished, and thinks an important step is to elect more politicians who care, and better laws to protect animals.

“I don’t really think I’m an ‘animal hero’, but I do believe helping God’s creatures is what I’ve been called to do in this moment of my life,” Byers said. “I pray over each one...God sends the adopters.”

A CARE-A-THON 5k walk/run will take place Saturday, Sept. 9. It is followed by S.A.F.E’s annual Woofstock celebration on Sept. 16.

To help local rescues and shelters: visit http://www.greenecountyhumanesociety.org/volunteer.php, connect with CARE Inc. on Facebook (/Charlacaninerescue) or connect with S.A.F.E Animal Rescue on Facebook at (/safeanimalrescueinc).

Kristen Inman is a staff writer at the Greene County Daily World. She can be reached at kristengcdw@gmail.com or @kristenkilker on Twitter.

More from this blogger · Kristen Inman
Comments
View 1 comment
Note: The nature of the Internet makes it impractical for our staff to review every comment. Please note that those who post comments on this website may do so using a screen name, which may or may not reflect a website user's actual name. Readers should be careful not to assign comments to real people who may have names similar to screen names. Refrain from obscenity in your comments, and to keep discussions civil, don't say anything in a way your grandmother would be ashamed to read.
Respond to this blog