Axl Rose pooped on me: a kitten tale 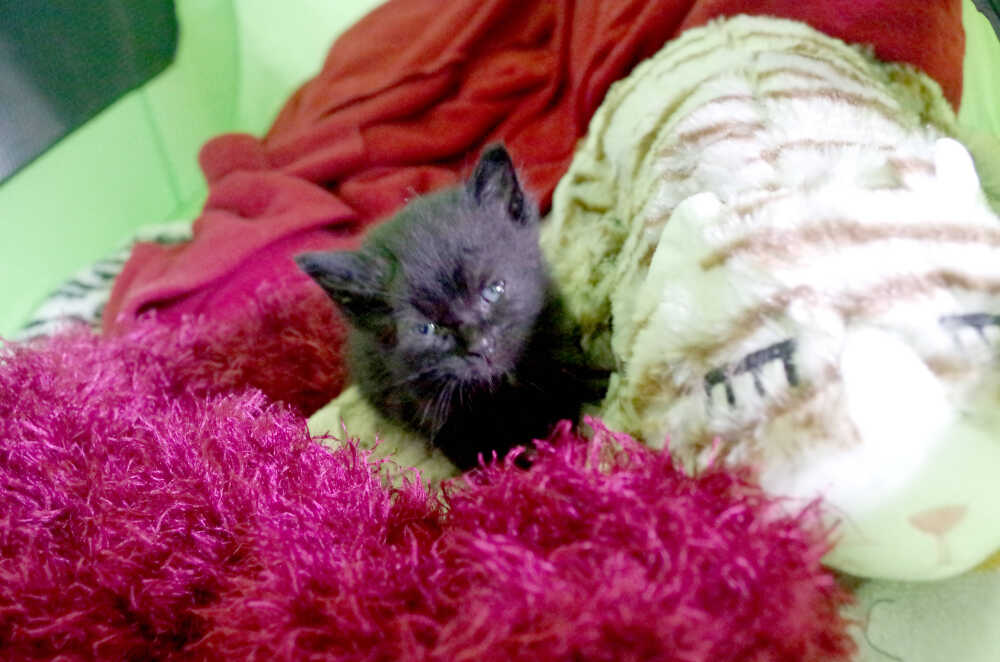 For the past several years, I’ve had vague plans in my mind of starting my own animal shelter but life (and sanity) always got in the way.

I thought I would start a sanctuary for senior cats, in memory of a beloved cat who passed away earlier this year. Having six cats of my own, I often turned to episodes of My Cat From Hell for tips from Jackson Galaxy, host and cat-behaviorist. He taught me a little more than the average person, not studying veterinary medicine, should readily know and bring up in casual conversation.

During one episode, Jackson Galaxy took his friend Hannah Shaw--AKA “The Kitten Lady”--on a cross-country trip to transfer a gang of 50 kittens from California to a shelter with open space in Denver, Col. In this episode, I learned that like senior cats, small kittens also face peril in shelters. They need to be bottle-fed, manually stimulated to use the bathroom and kept warm to maintain body temperature--things that the mother cat usually takes care of, but must be done by humans if the kitten has been orphaned. Many shelters are too under-funded, under-helped and over-populated to provide these special things for kittens on the necessary basis.

Having all this knowledge from watching cat shows, I had resolved that after finishing my final college course in December and getting my diploma, I would begin fostering kittens--nothing crazy, one or two at a time--for the Humane Society. While working with Chantel Eaton of S.A.F.E to write a preview for Woofstock 2017, I pitched the idea and she told me to not wait--do it.

The plan continued to form, and that weekend we went to Cedar Point for Halloweekends. As I stood in line for Millenium Force, I scrolled through a page called “Fostering Kittens: Where to begin.” Kegan looked over my shoulder at my cellphone and said simply, “no.”

Then Tuesday around midnight, after coming home from work, Kegan said he wanted to show me something. To my confusion he walked out of the house, and was gone for several minutes. Then, a faint “mew” began incessantly making its way to the house, growing louder. I was still confused, because Kegan was not possibly bringing me a kitten, knowing that my impulse would be to imprison it with my love and smother it back to health.

Then, he brought me a kitten. It was fuzzy and black with slate blue eyes, and mange had balded a quarter of its face and his little left paw. He told me that he and Duane, our neighbor, had left the kitten in a box where they found it hoping to draw the mother back, but she never came. When he informed me the kitten had spent the day in a box without eating, I sped to Walmart to purchase a small nursing bottle. At first, I let the kitten eat all it wanted. I later pulled up Kitten Lady’s website and consulted charts to determine the age and sex of the kitten, as well as proper feeding amount and schedule. Being unable to distinguish canines from incisors, I could at least see that the kitten had “top teeth” but no molars. “He” weighed a little over 200 grams, slightly underweight for the 2-3 week old category.

I had met the kitten at 11:30 p.m. and tended him until 3 a.m. After feeding him and taking him to the bathroom twice, giving him a waterless bath and applying anti-fungal to his mange, the kitten had finally stopped his ruckus and was snoozing silently on my chest. I was exhausted but also overwhelmed, because I suddenly found myself with a foster kitten. Am I a non-profit now? Am I a volunteer at a shelter which I had not even discussed the matter with yet? Or am I completely alone with a scared, struggling kitten that no one will want to adopt?

The following morning, I fed and cared for him again, and I decided to name the loud, attention-seeking kitten Axl after the Guns ‘N’ Roses frontman.

In four to five weeks, I will need to take Axl Rose to the vet to get “fixed” and find him a loving home. As Kitten Lady would say, “Goodbye is the goal.”

In the mean time, I will be accepting name suggestions for my kitten foster operation.

Kristen Inman is a staff writer at the Daily World. She can be reached at Kristengcdw@gmail.com. If you are interested in helping Axl Rose feed his milk habit, feel free to purchase items from his Amazon Wish List.