On Beginnings and Endings 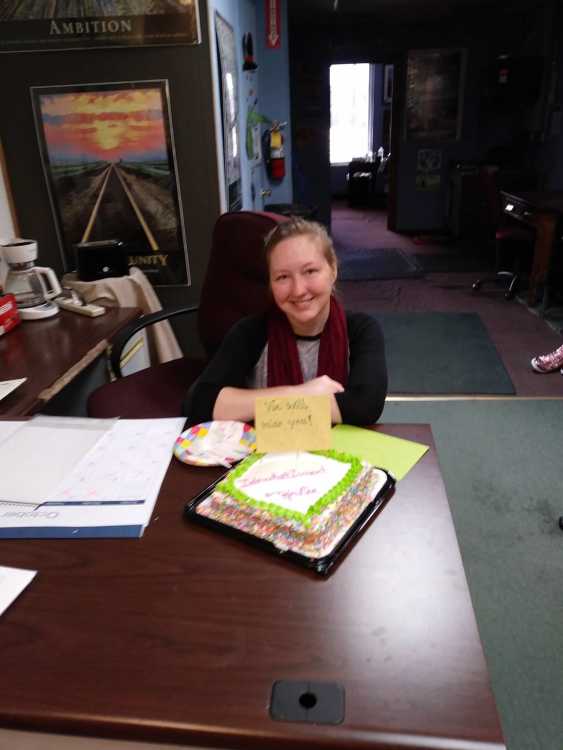 Me posing with my cake, picture courtesy of Tina Davis. The green lettering on the cake says, "IdowhatIwant." In the room but not pictured: Tina, Sabrina Stockrahm, Patti Danner, Becky Thompson, Laura Faulk and Christy Lehman. In spirit: Chris and Deb Pruett.

“The most important things are the hardest things to say. They are the things you get ashamed of because words diminish your feelings--words shrink things that seem timeless when they are in your head to no more than living size when they are brought out.” - Stephen King

That is a quote I shared on Facebook roughly eight years ago, which I stumbled on in my “memories”. Yesterday, I was playing internet detective to try to get information on Halloween events in Lyons and came across my first byline with the Greene County Daily World. It is a tradition I sort of started for myself when I shared my first byline after becoming a student writing assistant in the Office of Communications and Marketing at Indiana State University--and one I will likely continue when I begin my new job as a reporter at the Vincennes Sun-Commercial. 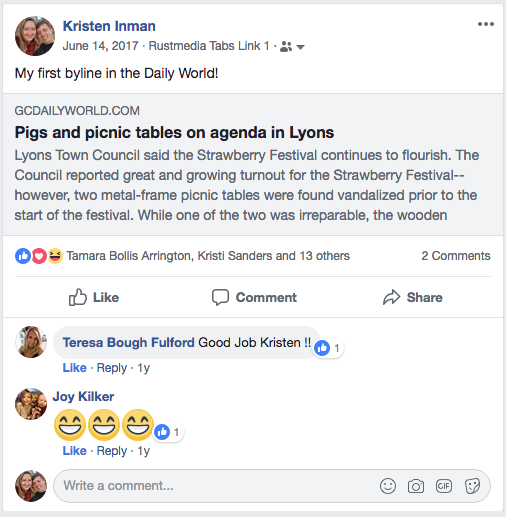 I have not been looking forward to writing this column. Over the past year, I have had a lot of experiences and felt many strong emotions, but when I tried to put virtual pen to paper, everything seemed to come out wrong. For that reason, there are many columns that I have begun, but never finished. Similarly, I was worried that in writing my final column here that I would be unable to put into words how much I will miss working here, seeing my coworkers every day, sending cat videos to Patti and not being judged for walking around the office swaddled in a fleece blanket.

Reading Chris’ column, in which he explained that he would remain publisher but would no longer be based in Greene County, made the dread of writing my column more real--but now, I also feel that “the universe” has been helping me to write it.

After finding the Stephen King quote, I immediately got to work on my column.

As with Chris’ decision, mine was not arrived at easily. After countless hours of talking with my husband, hashing out pros and cons with one of my mentors, spending two hours on a T-chart and throwing every question I could think of at the Publisher/Editor in Vincennes, I finally accepted the position.

I wanted to ensure that my decision, whether it was to stay or go, was not motivated by fear. I did not want to accept the position in Vincennes blindly assuming that it would be ‘better’ there or to run away from any mistakes I’ve made at the Daily World. I also didn’t want to turn down a job for an imagined fear that me leaving would doom the Daily World, or because I would lose friends by ‘abandoning’ them, or because I was afraid of accepting the position at Vincennes and failing.

In the past, I have turned down many opportunities because of fear; and by every measure, this looks like a great opportunity.

After making my decision, I did everything in my power to leave my coworkers in the best position possible, but being short a reporter with no plans to fill the position will leave the remaining members of the news team in a tighter place than normal. Our team of three reporters (including Sabrina) covering the entire county, already under unimaginable stress, will be reduced to two full-time reporters and the two sports reporters and stringers will be picking up wherever they can. Reporters seek, write, shoot, edit and post their own work. Proofreading is performed by tired eyes and stressed minds who only choose to work in this occupation for no other reason than to help keep people informed and help to keep the local government officials, school board members, and other people who hold positions of power in check.

For this reason, I plan to purchase a subscription once my free employee subscription is discontinued. I will continue to live in Linton, but instead of working at the newspaper, I will be just another Greene Countian that our local paper will work hard to inform.

In closing, I would like to thank the people of Greene County. I would like to thank my editor, Sabrina, for believing in me enough to give me this opportunity at the Daily World. I would like to our publisher, Chris Pruett, for being invested in my growth as a reporter and always listening to my concerns. I would like to thank Patti Danner for being awesome all-around, a great friend and a kick-ass reporter (same for Sabrina). I would like to thank the sports reporters, Terry and Andrew, for teaching me at least a little bit about how sports work. I would like to thank Deb Pruett, Chris’ wife, for her gifts of baked goods; Becky Thompson, Laura Faulk, Tina Davis and Christy Lehman for being hilarious and a bright spot in every day (although Becky may be a ‘sarcastic ray of sunshine’); Mike, Daryl, Danny and everyone who works at the press for putting up with my last-minute paper submission tactics; John Swaby and fellow former reporter Andrew Christman, as well as Cory Anweiler and Heidi Puckett, for being important parts of the first half of my journey here; and all the other people at Rust Communications I have never had the pleasure of meeting, but who I am sure played a part in all of this.

I am excited about my new job and extremely grateful for the opportunity; but it was this opportunity in Linton that I have to thank, both for the time I was privileged to spend here and for any future opportunities that may arise. 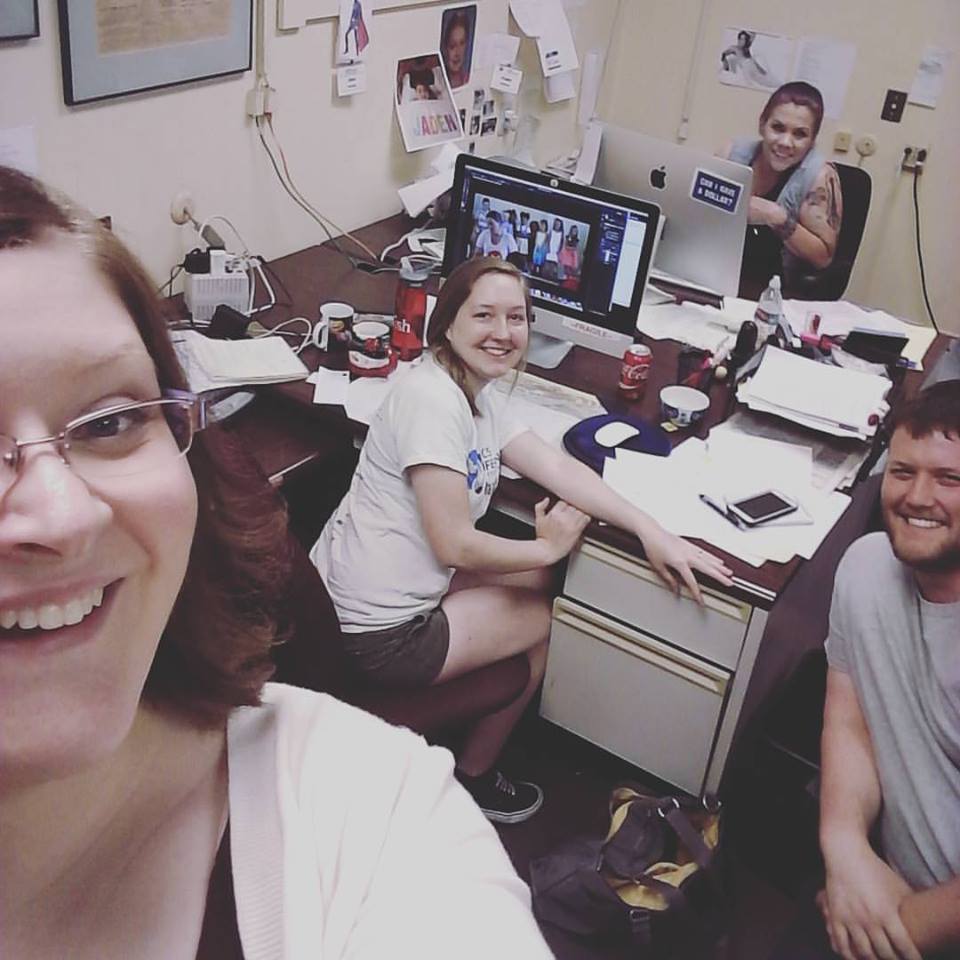 Taken a month after starting at the Daily World. We were all oddly-dressed, deep in the midst of 4-H season, but our office likes like this all year round. Front: Sabrina Stockrahm, right: Andrew Christman, top right: Patti, center: me.
More from this blogger · Kristen Inman
Comments
View 2 comments
Note: The nature of the Internet makes it impractical for our staff to review every comment. Please note that those who post comments on this website may do so using a screen name, which may or may not reflect a website user's actual name. Readers should be careful not to assign comments to real people who may have names similar to screen names. Refrain from obscenity in your comments, and to keep discussions civil, don't say anything in a way your grandmother would be ashamed to read.
Respond to this blog