‘Home on the range’ in Greene County 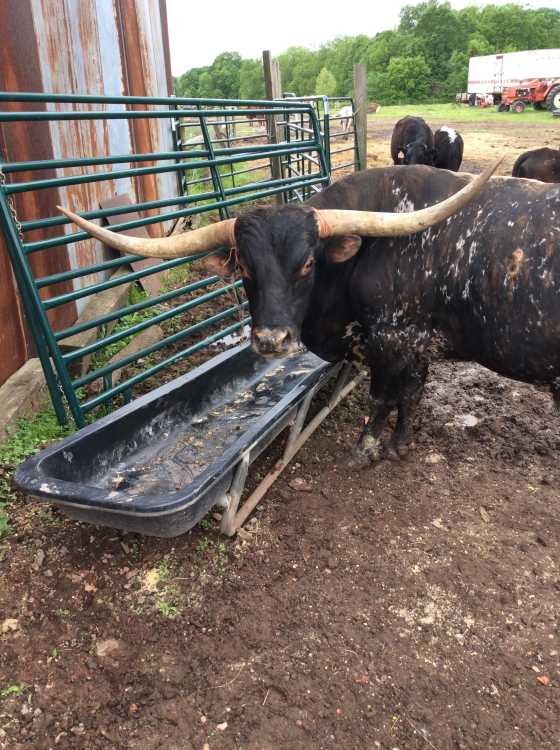 A Greene County farm is home to several longhorn cattle. (By Tawni Prudhomme)

Surprisingly, you don’t need to travel to experience “home on the range.”

I was invited to spend some time at the Orman farm just west of Midland. They raise longhorn cattle.

After parking in the drive, a blue tick hound, with tail wagging, walked us up to the long country porch. We were met by the owners who welcomed us with outstretched hands and smiling faces. Having never met this couple, we immediately felt comfortable and lapsed into friendly conversation. Stumpy (nicknamed by his grandpa) and Jenny’s farm sits on some 20 acres. They have a 13-year-old and 17-year-old son. The 13-year-old wants to raise cattle just like his dad. He has a good start and was gifted with a calf for his birthday.

Stumpy shared a bit of history about the farm.

“When we purchased the farm, the previous owner had a 40-year collection of old cars and farm equipment spread over several outbuildings. One building was engulfed with antiques and could only be accessed after lifting pieces away. Later, we sold most of the antique cars and equipment,” he said.

Stumpy and my cousin led us over to a Mule which would allow us to get “up close and personal” with the small herd of very large longhorn cattle. We were immediately joined by the blue tick who pushed his way between the two men up front. As we motored through the field, we got our first closeup of these truly beautiful animals. Stumpy called out names of each as we slowly moved through the herd.

“That’s Valentine and she was born on Valentine’s Day. Her calf is just three days old. The older cow is called Cinnamon because of her color. There’s Tammy Wynette. We had one named Dolly Parton due to her big udders. Here’s ZsaZsa, and of course, there’s Gunner, our bull.”

Gunner is a magnificently muscled animal with a calico colored hide. His horns, which seem constantly cutting a swath side to side, have a span of around five plus feet.

Stumpy said, “We bought him because he was named Champion Longhorn Bull. His unusually colored hide is worth fifteen hundred dollars and his set of horns are valuable too. We wanted to breed him to our cows to produce some top-notch beef. Longhorn meat is one of the healthiest of low-fat lean meats.” As we slowly motored past Gunner, Stumpy shared a couple of tales about Gunner. “He’s powerful enough to tip over a tractor. He also jumps over eight-foot fences. We’ve found him running around the neighbor’s yard grazing. He and I butt heads here and there and I make sure he knows I am the boss.”

Longhorns must be branded and have metal ear tags. They can live up to 25 years whereas other cattle have a 15-year life span. The are known for their characteristic horns that can extend over 70 inches tip to tip, exceptional steers 100 inches. They are also known for their distinctive coloring, longevity, resistance to disease, and ability to thrive on marginal pastures. Elite genetics can sell for $40,000 or more, one record-setting cow sold for $38,000 at auction. They are descendants of the first cattle in the new world.

As we continued roaming the farm pastures, Stumpy pointed out a huge oak that had been felled. “We counted 222 rings.” We passed a woods that housed a family of foxes, deer, and wild turkey. A newly-built pond on the left was one of several ponds to be excavated in the future.

We made our way up a steep hill and back to the feed lot. Stumpy scooped up a couple of buckets of feed and some alfalfa cubes.

“We feed a mixture of corn, gluten, and alfalfa,” he said.

He dumped the grain in a few troughs and yelled, “cow, cow, cow!” The herd trotted from the field and started rooting, pushing and shoving their way into the troughs with jabs from their horns. Grain fell from their mouths, some flying through the air. One cow clambered into the trough putting her two front feet inside to gobble up her share. I watched as the two small calves stood off to one side during the scramble for grain.

Stumpy shared, “The calves suckle milk but will begin eating some grass a few days after they are born.”

After feeding some alfalfa cubes to a few members of the herd, we walked back to the house, thanking our hosts for a wonderful spring day roaming their farm. Meeting Stumpy and having him share his knowledge of Longhorns and passion for his farm was the perfect way to spend our day, Texas style.

Tawni Prudhomme is a staff writer for the Greene County Daily World.