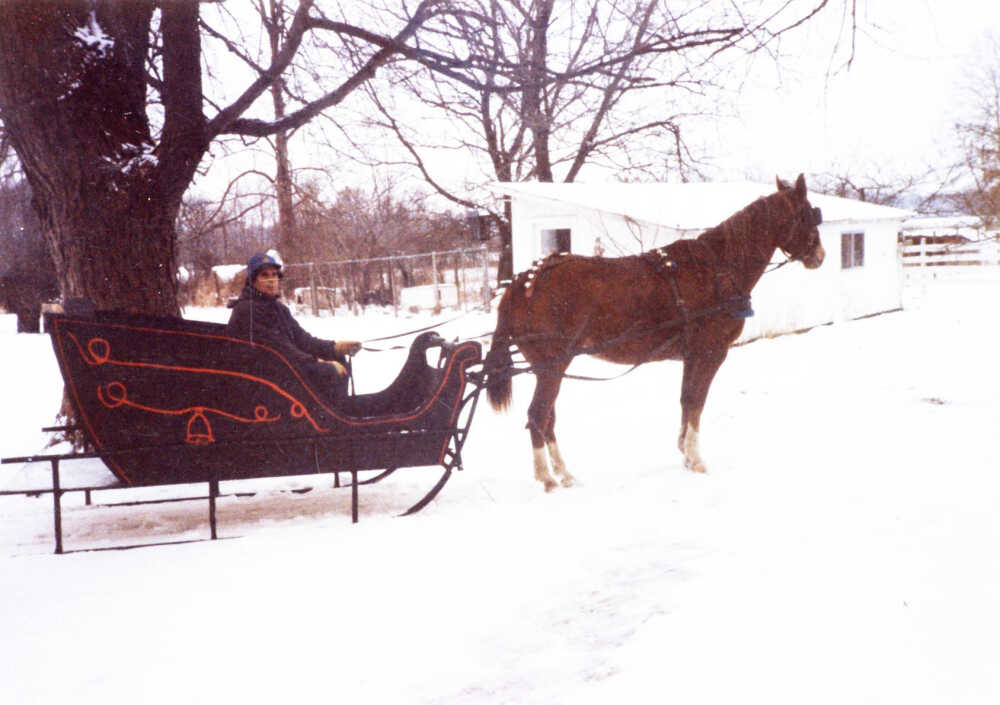 Some of these stories I have written down before. But it has been 20 years ago, and I have added more to them. When you get older, it's kind of cool because you can read a book or watch a movie and in six months, you have forgotten so much, it's like a new book or movie.

I traded for a half quarter-horse half thoroughbred mare that wasn't broke. Her name was Vicki. I started breaking her first on the ground. I put a saddle on her and started driving her with the lines through the saddle. Each day, she got better and within a week, I was riding her. I rode her for a couple months.

She seemed broke. I wanted to make her a buggy horse also. So, I loaded up one of my coon dogs and headed for Amish country. I knew a fellow that needed a coon dog and I knew they had several buggies. My wife went with me. She wanted to buy some yeast to make bread.

When we arrived there, I told Mino, an Amish friend of mine, that I needed a buggy. We found one where he kept his buggies. It was an old one, but it worked. I went to the truck and got the dog out of the back, and told him I would trade the dog for the buggy. He looked the dog over and said he would trade. I had sold him a dog before and it was a good one, so I guess he trusted me. We loaded the buggy into my F-150 truck. My wife got her yeast and we headed home.

I started working Vicky on the buggy in my two-acre pasture, then started driving her around the Conservation Club. After a week, she was working like an old horse.

Vicky had never been shod, and she would need shoes to go out on the road. I went to Ellis Feed Store and got shoes for her. I had never shod a horse but I had a book that told you how to do it. I got my tools out, led Vicky over to a shade tree, and proceeded to shoe her. I smoothed her foot down like it said in the book. I put the nails in, cut the nails off, and let her foot down. Then I let her rest, and let me rest. I clenched the nails down, and rasped and filed until I was finished. I finally got all four feet shod. I felt like a blacksmith, and my back hurt.

The next day, I thought I would try her out. I wanted to go to Lonetree where I was born to see what it was like to travel from Linton and back like my folks once did. I took the back roads and I was surprised how fast Vicky could move down the road. I let her rest one time on the way there. When we got to Lonetree, I let Vicky rest and headed back. I thought about how it would be if it was winter time, and you had to bring your family along. But it was fall and it was fun.

My uncle, that could tell some tall stories, once told me he wanted to go to Palestine, Illinois, to see some of his kin. So he hitched his horse to the buggy, filled his pipe with tobacco, lit it, and took off for Palestine. He said when he entered the city limits his pipe had just run out of tobacco. He either had a big pipe or a fast horse.

My grandsons came by on Saturday. They said, "Papaw, let's build a Santa sleigh. I thought that should be easy. One time they came by and wanted to build an airplane the size of a Piper cub. It didn't happen.

One of my grandsons, when he was about eight years old and didn't want to go to school, told his mother, "Why can't I go down to Papaw's? He can teach me everything I need to know." Poor kid, bless his heart. Oh, it's so hard to be humble, when you're talking about your grandkids.

I got some pipe and started building the runners and frame for the sleigh. I welded that all together. Then I started building the top part. I built it just like the Santa sleigh with the back seat high. I finished it in about three weeks, and the grandsons wanted to ride in it. I hooked the tractor to it and they would ride through the fields in it. They liked to ride in the high seat. Now I just needed some snow.

It was about Christmas when I got enough snow to try it out right. I hitched Vicky to the sleigh. I had the jingle bells and all. It was cold. I took off for the Linton Park, which is a half-mile down the road, made one circle, and went back home.

You know that Jingle Bell song about "how much fun it is to ride in a one horse open sleigh"? It isn't so much fun when it's real cold.

When the weather warmed a little, we had fun going through the fields in our one horse open sleigh.

Bob McDonald is a Linton man, an avid coon hunter, songwriter and musician who likes to write and tell stories.