She ain't heavy, she's my sister 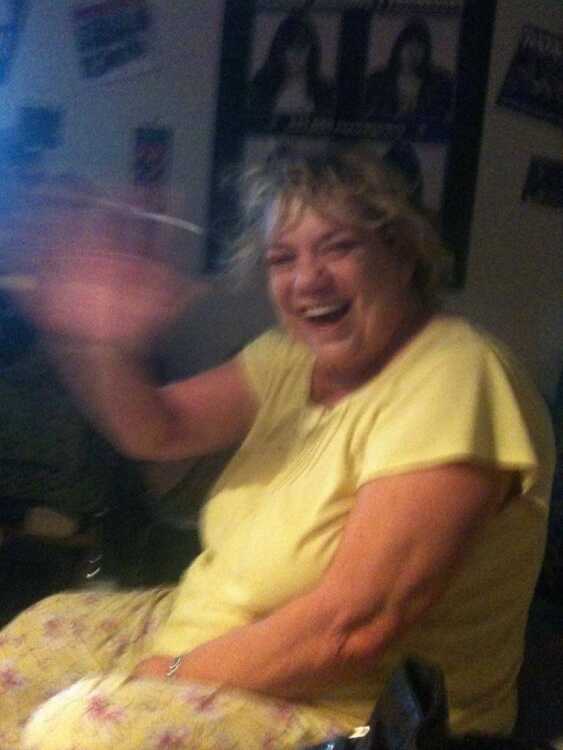 My oldest sister, Barb, is 17 years my senior. As a result, we didn't hang out much when I was younger. Add the factor that she gave birth to her first child two weeks, two hours and 23 minutes after my own debut on the planet, she was understandably busy raising her own child during my formative years.

My sister was 17, my mom was 40, and they were both pregnant. My sister dropped out of high school to marry the father and start a family, and my mom was under the impression that she was undergoing menopause.

A fifth child was the furthest thing from her mind, and I'm guessing that mom may have clung to the menopause dream, looking forward to the break.

Mom said when I started to move and kick in her belly, she was actually relieved to be "only pregnant" rather than menopausal, and since she was four months pregnant or so by then, she only had to be pregnant for five months more, so she felt lucky to not have known.

My mom was kinda weird, but it definitely added to her charm.

My sister, pregnant at 17 (in 1965), was in no hurry to confirm her own pregnancy suspicions, or explain her condition to the parents, so I suppose she enjoyed the same delayed beginning to her pregnancy as well.

In 1965, there was simply no question but that she would marry the father, that's just how things were done in that era.

The marriage turned out to be a brief one, but my niece and I were like two peas in a pod. Or like a really small gang, we had each other's back most of the time.

So my niece and I grew up like sisters, with me being the oldest, and her being the bossiest.

I was born under the Libra sun, and my niece entered the world as a Scorpio, hence the bossy demeanor.

I never minded, however, and since my siblings were all my elders and bossy in their own right, it never seemed odd to have her take the lead in most things we did.

So, with siblings old enough to be my parents, I wasn't partricularly close to either my big sisters or my big brothers, and spent my free time mostly playing alone, hanging out with Bossypants or reading a book.

The dynamic between my oldest sister and I had always consisted of her acting like my mom and me acting like a kid, which I was at the time, so that was normal, anyway.

But my sister and I never really got close, never had that transparent sister bond where we shared boy talk, secrets, or clothing, or talked about boys or clothes or secrets.

A 17-year gap is huge when you're younger, but it seems to shrink as you age, kind of like people do sometimes.

My sister got sick about four years ago, and the news wasn't good the dreaded "C" word, cancer.

Since losing my big brother and then my mom to the disease, the remains of our family lived in dread of cancer, as we had all seen firsthand what the disease can do to an otherwise healthy loved one.

Initially, she was diagnosed with breast cancer, but during the biopsy to confirm its presence, doctors discovered her cancer had not originated in her breast, but had metastasized from her lymph glands.

She underwent several rounds of chemotherapy, some radiation and got herself a medical marijuana card after a discussion with her oncologist.

This helped with her pain, her anxiety and her appetite. She cannot smoke it because it will make her cough violently, but she was able to consume edibles, and THC extract in capsule form.

She fought like a girl, and today is in remission, with good days and not-so-good days, like anybody else.

I suspect she may be part cockroach, and I'm referring more to her tough exterior than to any actual physical resemblance.

One thing I noticed through her illness was that she never complained, not to me anyway. I was proud of that, and told her so.

Feeling that pride in my sister, praising her efforts and her resistance to a "poor me" attitude, changed our relationship. I think I stopped thinking of her as an authority figure, and began to finally see her as, well, my sister, my equal.

We spent more time together, and we talked, we shared opinions and viewpoints as equals, like sisters do. I guess I never saw her vulnerability before, or if I did, maybe I thought it was something else. I dunno.

In the last few years, she has flown to Linton to visit a few times, and I have flown to Seattle and spent time at her house as well.

The last time I did, I took her to her final chemotherapy appointment, and we took a drive north on Interstate 5 to visit a seafood restaurant in Conway that she wouldn't shut up about. Pretty sure she's known that I've hated seafood my whole life, but she was driving, so Conway it was.

After a meal and a rousing Seahawks game on the restaurant's big screen, we decided to continue heading north, to visit Deception Pass, a beautiful place if you've never been there. After Deception Pass (did I mention SHE was driving?), she zigged when evidently she ought to have zagged, and we continued north, thinking we were heading south. I say "we" but I was paying more attention the the scenery than the direction, so I'm confident when I say what happened next was entirely her fault.

We came around a corner on the highway, and couldn't help but notice we were nearly out of road. We had somehow traveled so far in the wrong direction, we wound up all the way around the peninsula, at a ferry terminal, in the dark, about 100 miles or so from where we thought were headed.

She turned the car around, and I turned on my GPS and laughed like a hyena at our predicament, reveling in the fact that it was, as I said, all her fault.

We drove about five or 10 miles before I helpfully pointed out that we were in for at least three more hours on the road, and if we were to board the ferry, we would be home in less than an hour.

"There's a damn good chance you would be driving for three more hours, for starters," I said in my helpful way.

So, the final leg of our adventurous foray was spent on a 15 minute ferry ride from Clinton to Mukilteo on the waters of Puget Sound.

She grumpily and comfortably stayed in the car while I raced to the upper deck to enjoy the chill wind in my hair, and the smell of the sea, which I had sorely missed while living in Indiana.

We got home with yet another funny story to tell my brother-in-law, tired yet exhilarated from a long day spent together, laughing, telling horrible jokes, and fighting over the radio station.

I'm grateful for my sister's laughable navigation skills, and the extra time we got to spend together that day as a result. When it comes to family, it's all quality time, and spending it with my sister made the whole thing fun.

There's the added bonus of having a new thing to tease her about, but mostly I'm grateful for a trip that I'll always remember, and a sister who thought it was almost as funny as I did.

The most beautiful city in the whole dang world, in my opinion. Also known as my hometown, Seattle.
More from this blogger · By Patti Danner
Comments
View 2 comments
Note: The nature of the Internet makes it impractical for our staff to review every comment. Please note that those who post comments on this website may do so using a screen name, which may or may not reflect a website user's actual name. Readers should be careful not to assign comments to real people who may have names similar to screen names. Refrain from obscenity in your comments, and to keep discussions civil, don't say anything in a way your grandmother would be ashamed to read.
Respond to this blog