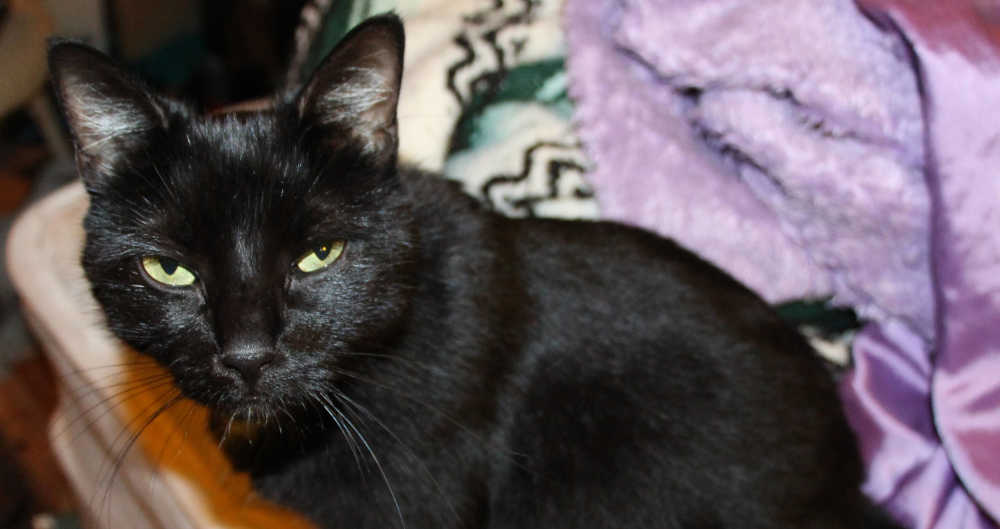 By Patti Danner Meep will take no guff from those swine

Several years ago, one of my best friends died. I had him euthanized when it was determined that he was suffering from a fatal disease, and not getting any better. He deserved a quick, painless death and it was the last thing I could do for my little black buddy.

His full name was Powder McChowder Prince of Cats, but I just called him Powder or Powd.

When I first laid eyes on him, he was one of six mewling black kittens in a basket, brought to work by a fellow cashier who knew I wouldn’t be able to resist.

We were family from that first day until his last day, and I’ll always love him.

After he had been gone for a few weeks, maybe months, my son Jared told me that he knew someone who was giving away free kittens (free? what a deal!) and he was sure they had some black ones.

I wasnt sure I was ready to love another fuzzy-butted meow face, but then I met Meep.

I went to the friend’s house with Jared, and there must have been 15 kittens of various ages running around outside, all covered with fleas and dirt. I looked around, and noticed a tiny little black lump, mewing weakly and running into things with its oversized kitten head.

“What a tiny, stupid fuzzy thing,” I thought. “Friend!”

I texted John to test the waters, “If I brought a kitten home, would you hate that?”

He answered with one word: “Yep.”

So of course I did the only thing I could. I brought her home and hid her in a back room, visiting her and playing with her and falling for her more every day.

After about two weeks, I could no longer stand the subterfuge, and I brought her out, saying, “Youre gonna kill me, but look.........cute!”

He tried to act displeased and annoyed, but it didnt take very well, and soon she was up on his shoulder and he was talking to her in that high-pitched voice he reserves for animals, especially kitty cats.

Exasperated, I looked at her and said, “Fine. You tell me. What’s your name, little one?”

She looked up at me, and answered, “Meep.”

And so she became Meep, sometimes Meepy, or Creepy, or Beep-Beep.

She was a little runty snot of a kitten, attacking any foot that dared walk by, and kicking the dickens out of any shoe she would come across. She fought WWF-style, grabbing on and slamming her victim to the ground, fearlessly.

She is six years old now, and she’s my buddy, my confidante, my playmate and friend.

She may be a tiny little thing, but her voice, in my face, when she wants me to wake up, is not.

John calls her “Squeeze Toy,” because she will mew like she is in agaonizing pain at the slightest squeeze.