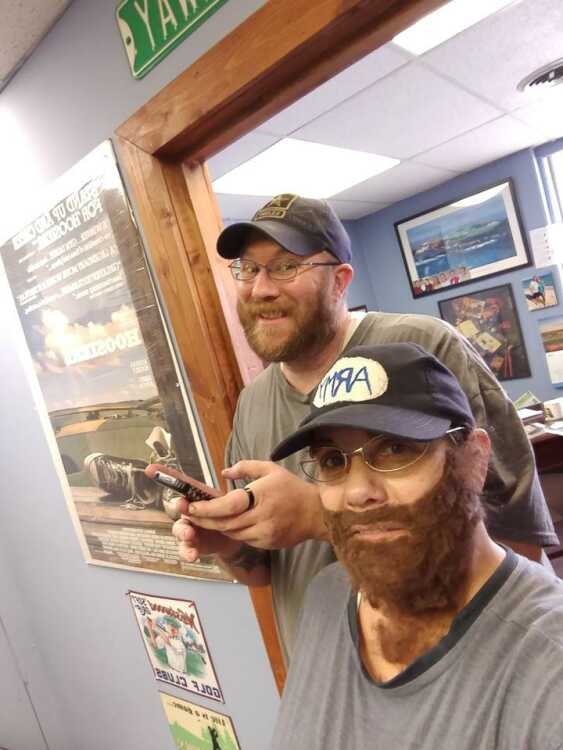 Alrighty, let’s head into the pressroom. Big. Loud. Awesome. The press itself is amazing. watching the paper spin by so fast it’ll make your head spin. Ink by the barrel, paper by the ton.

The pressroom is staffed by two and a half men. I say two and a half, because there are two regular press guys, and then our paginator, Jon, runs it on Fridays. He is a whole man, and I’m not calling him short, but..........yeah, he is.

Mike is the press guy who has been here forever. Wouldn’t be surprised if he could run the thing blindfolded. I wonder if he does, sometimes, just to spice it up a little.

Mike is a good guy. Quiet until he knows you better, and he turns into a big blubbery pile of goo in the presence of his grandchildren. I like that. Dont know a whole lot about Mike, but we get along just fine.

And then there’s Cory. He doesn’t have any grandkids yet, but he is absolutely positively super-duper one hundred percent crazy about his wife, and his kids. I like that, too. Plus he’s a total Star Wars nerd, and an Army veteran.

The press guys pretty much wear the same stuff every shift, because who would want to ruin clothing you like? It’s a dirty job. Mike always wears bib overalls, and one year for Halloween, Jon Swaby wore a pair of bibs and came to work as Mike. I didn’t work here at the time, but the photos are just awesome.

Inspired, I wondered if a person could come up with a good ‘Cory’ costume, and from there it became a challenge, I had to try.

Ha ha ha ha...............it worked pretty well. So well, in fact, that when I came to work on Halloween, nobody knew it was me! Chris and Christy just looked at me, and when I said something they recognized my voice. Until then, they said they had no idea who this guy was who just came walking into the newsroom like he worked here, ha ha ha.

It wasn’t really all that hard. I studied Cory for a couple of weeks, then hit Cheapo Depot and the Halloween Store in Terre Haute. I knew I was going to need actual theatrical hair to fashion the beard and moustache, fakey-looking just wasn’t gonna work. I didn’t have an Army hat like he always wears, so I made one. Check. Bought some cheap glasses, popped out the lenses, check.

Found the exact color shirt he wears, and some cargo shorts, crew socks, and sneakers. Ta-Da, I’m a man!

Cory cares passionately about veterans, his family at home, and his parents. We totally disagree on anything political, and that’s okay. I respect his views, and he appears to respect mine. Oh, and he’s also a Star Wars nerd, did I mention that?

Shoot, I almost forgot our intrepid leader, Chris Pruett. That would have been awful. Chris is constantly in the same mood, nice. Even when he is annoyed (I assume he gets annoyed), he’s nice. He’s fun to talk and joke with, and he is the first to compliment you if he thinks something you wrote is good. Even if you’ve made a dumb mistake, he’s very nice in getting it corrected.

Actually, the stocking stuffers and little gifts were easy. Dark chocolate, BAM! As for the bigger gift, I was completely stumped. Something golf, that was a no-brainer, but what do you get for the golfer who has an office full of golf stuff?

So I enlisted a co-conspirator, my editor Sabrina. She informed me that his all-time favorite movie is ‘Rudolph the Red-Nosed Reindeer.’

Anyway, Chris is a good guy, his wife Deb is equally awesome, plus she makes brownies and truffles and stuff for all of us, so points to Deb, keep that good stuff comin’!

Okay, last but certainly not least, the inserters. This crew is the reason you get those scrumptious coupons and sale flyers in your paper and your Shopper. They stuff thousands, every shift.

I’ve done the job, once or twice, just to help when we were shorthanded, and I must say, it takes some skill. Also, I pretty much suck at it. Much respect to these ladies + one guy for the hard work they do.

I don’t see them every day, so learning their names took awhile.

The two ‘main’ ones are Tami and Liz. These women are made of steel, I’m telling you. Their hands go so fast on the job, they’re a blur and they’re always working. Much respect, ladies.

There’s Samantha, she has cool hair and some very impressive tattoos. Animal-lover, points for that, and she gets the job done.

There’s Laura, too, she’s kind of quiet but sweet and kind, has never had a bad word that I’ve heard.

I apologize if I’ve left anyone out, I don’t think I have.