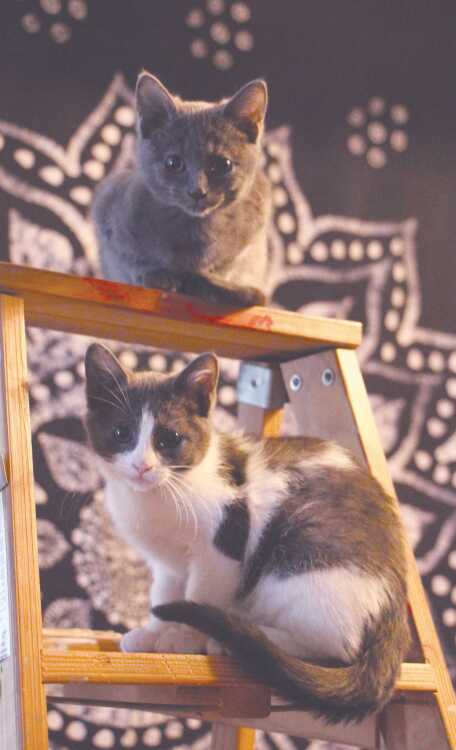 These two sister-stinkers have invaded our home...and our hearts

Last November, my blog featured a few stories about my adventures hand-raising a litter of feral kittens my husband, John, had rescued from the recycling center and brought home.

We had quickly made ourselves experts in kitten-raising, out of necessity, learning how to feed them, clean them and care for them when they were sick.

Of the four mewling furballs he brought home, we found a loving home for two of them, sister and brother Monster and Morris, and mutually decided we would keep the other two sisters, Markie and Monkey, much to the consternation of our two cats, Meep and Zephyr.

Since then, Markie and Monkey have established themselves in our household, and by established I mean they have taken over.

I had begun a nightly ritual of treating all four cats to an evening meal of either Fancy Feast, “Lil’ Soups,” which I have taken to calling “kitty soup” or solid white albacore tuna.

In my opinion, kitty lives are all too brief and any opportunity to spoil them should be taken.

Now, every evening when I get home from work, all four cats convene in the kitchen, making eye contact with me and silently or not-so-silently awaiting their luxurious meal.

I pretend like it’s a hassle and I pretend to resent their complete control over me, while in fact I look forward to the mini cat convention that always awaits me, feeling comfort from being needed and feeling like an indulgent parent.

Meep, who had the hardest time adjusting to the presence of the two impossibly adorable invaders, has yet to warm to the idea of them, while Zephyr, who has always been Mr. Mellow, accepts them for the most part and can even be seen allowing Markie to groom him and cuddle up on occasion.

Markie, impossibly cute, has the dominant personality and loves to trick me by flopping adorably at my feet before mercilessly attacking my ankles with claws and teeth.

Monkey, who was the sickly runt, has become a pewter-colored, soft-as-velvet cat who will occasionally favor me with a cuddle ritual at night where she climbs up my reclining form to snuggle into my neck and knead, “making biscuits” for ten minutes or so.

Meep, ever the jealous girl, will immediately hop off of my bed if she sees shenanigans such as these begin.

When I wake up in the morning, it is always to same cat configuration. Meep is curled up by my head, and Monkey is either snuggled at my feet or curled into the hollow of both of my knees.

Life with four cats...it sure could be worse.

The most beautiful city in the whole dang world, in my opinion. Also known as my hometown, Seattle.
Respond to this blog