Madison's Musings
Madison Smith
When sheĺs not writing away or volunteering, Madison can be found jamming to some good olĺ country music, fishing, practicing photography, crocheting, resisting the urge to impulse buy something on Amazon, jonesing for some sweet tea or trying out her latest recipe find on Pinterest. She can be reached at msmithgcdw@gmail.com.
Recent posts
Archives

Not just a city in Ireland 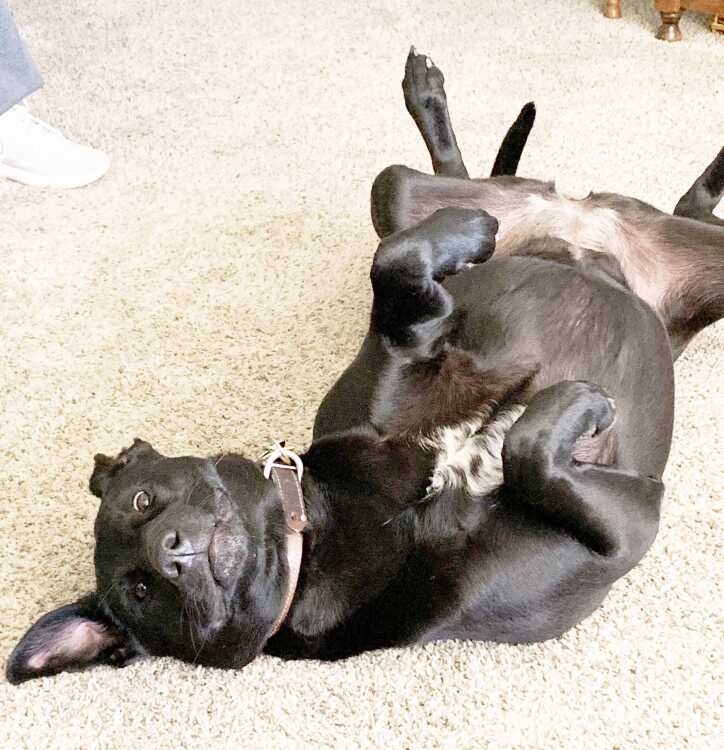 My family has a dog we rescued in May of 2020. Yeah, right in the thick of it all and after I’d been sent home from studying abroad (see an earlier blog for that story).

I’d been doing the dangerous task of browsing PetFinder when I came across this innocent looking face who had only been posted a few hours before. Not even a week later, we brought the puppy we named Dublin home.

We’re pretty sure she’s mixed with black Lab, but we’re clueless as to what else she is. As a puppy, she resembled a Great Dane because she had long legs she couldn’t control and a head that looked similar to a Dane’s.

I’ve been around dogs my whole life, I even worked at a kennel for a year, so believe me when I tell you this is one of the weirdest dogs I have ever had the pleasure of being around.

First off: the noises. Short of a Husky, this is probably one of the noisiest dogs I have come across. Stretching, playing, alerting to the FedEx man and greeting you when you come home. She has different noises for everything, from a low grunt/whine to a howl to something Chewbacca-esque.

Second: the attitude. When she was a puppy and didn’t get what she wanted right away, this dog would start with the noises as a warning before delivering the kill shot. That’s right, she’d start punching you.

Jerk move, right? Thankfully, she’s (mostly) grown out of this.

Another way she got her revenge was by going for one of the precious commodities. After her first bath, she expressed her displeasure by dragging a toilet paper roll through the house.

And finally: the intelligence. This is probably one of the dumbest smart dogs I’ve ever met, and I say that with all the love in the world.

Personally, I think she ran into a few too many walls and doors when she was younger (those Dane legs, remember?).

She doesn’t fall for the fake ball throw trick, she remembers hiding spots and she knows just where her snacks are kept.

But she also will lose track of her toy if she can’t see it, nearly falls over every time she licks herself and chose a rock to hold in her mouth one day. Never tried to eat it, just wanted to hold it.

She’ll be two years old in February, and I can’t wait to see what other shenanigans she has to pull.

More from this blogger · Madison Smith
Comments
View 1 comment
Note: The nature of the Internet makes it impractical for our staff to review every comment. Please note that those who post comments on this website may do so using a screen name, which may or may not reflect a website user's actual name. Readers should be careful not to assign comments to real people who may have names similar to screen names. Refrain from obscenity in your comments, and to keep discussions civil, don't say anything in a way your grandmother would be ashamed to read.
Respond to this blog