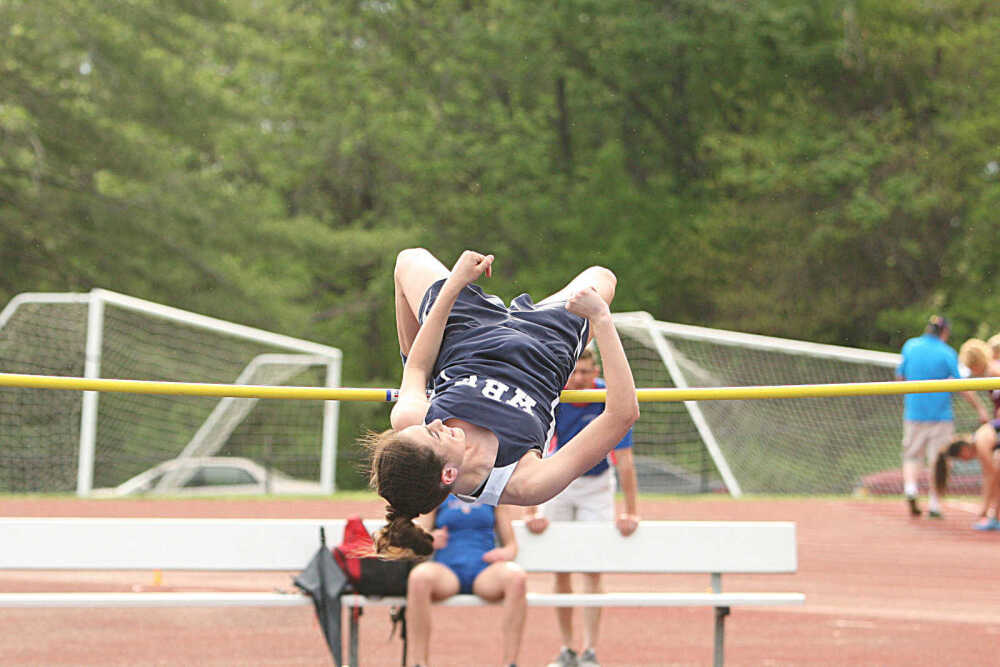 Jailyn Lundy (WRV) advanced to the regional last year in the high jump.

The Eastern-Greene Lady Thunderbirds are still searching for their first win.
However, Ashlie Egan, in her first year as softball coach at Eastern, said the team continues to improve “day by day,” a process not helped by one of the rainiest Aprils on record.
“We are starting to compete more in every game,” Egan said. “We have been ahead these last few games and then we have our “bad” inning. It is very common for teams who are learning like us. It isn’t something we are frustrated about as a team. It’s become our goal to get those bad innings down to a bad play. We will get there, though. You only get things in life by hard work and that’s just what these girls are putting in. Their time will come.”
Egan said the Lady Thunderbirds have been getting outstanding effort from freshman hurler Indy Workman. Workman had compiled 36 strikeouts so far this season, including four against Shakamak Monday night. She also rapped out Eastern’s only hit against the Lady Lakers.
“She’s a strong girl,” Egan said. “Her heart for the game is unbelievable, and that’s just something that can’t be taught.”
Senior Evelyn George has returned as Eastern’s leading hitter. Egan said the catcher has been the team’s leader this season.
“She’s seeing the ball off of her bat, and good things are happening,” the coach said. “She’s done an outstanding job keeping the girls in a positive mindset. Behind the plate she is growing as well. Her confidence is coming out, and she’s becoming unstoppable back there.”
Several players have taken the outfield for the Lady Thunderbirds, including Talan Bullock in right field and Sydnee Luallen in left. Although errors in the outfield were a problem against Shakamak, Egan said both players have made “some game-changing catches out there.”
Third baseman Megan Leighton has recovered from an ankle injury, and Egan said “nothing is stopping her now.” Egan said Leighton has begun hitting the ball over the last few games and has turned in “some beautiful backhand stops.”
Sierra Vaught has been hustling to play shortstop, a new position for the sophomore. Not only is Vaught absorbing information like a sponge, Egan said, he has been slapping out a few base hits.
Freshman Rylee Utter is learning how to play first. Egan said Utter is working hard “and that’s all a coach can ask for.
“Overall, we are improving day by day.” Egan concluded. “I have had a blast so far this season with this group of girls. Coach (Phillip) Uphold and coach (J.D.) Kirkman have been outstanding this season as well. Without them I would be all over the place. I can’t thank them enough for everything they have done this season. We are a team to and through. Between our coaching staff, managers, and players, there is never a hole.”

Fast track at Btown North
If our readers have been reading the track previews we’ve done -- and I know you hang on my every word -- you’ve seen several references to coaches talking about how tough the Bloomington North Sectionals are. I have used the phrase “murderously fast” several times.
Consider two events.
Last spring, Lance Dyer of Linton-Stockton finished eighth in the 100-meter dash with a time of 11.64 seconds. He would have placed eighth or ninth with that time at the Kokomo, Carmel, Ft. Wayne North Side, Decatur Central and Evansville Harrison sectionals. However, he would have finished second at Bedford-North Lawrence, fourth at East Chicago and Columbus North, fifth at Floyd Central, and sixth at Rensselaer, Muncie Central, and Terre Haute North.
Jacy Collins of Shakamak finished fifth in the 800-meter run with a time of 2:29.53 and eventually qualified for the regional when her time was compared to those of the other sectionals that fed into the Bloomington North Regional.
She would have finished fifth or sixth at Ft. Wayne North Side and Zionsville (for some reason, many of the girls sectionals were held at different locations from the boys sectionals.) Collins could have run the same time and placed second at Jeffersonville, Kanakee Valley, and Franklin County; third at Pike; fourth at Terre Haute North, Warren, East Noble, and Mt. Vernon; and fifth at Highland and Harrison (West Lafayette).
I think that proves Bloomington North is definitely one of the tougher sectionals. County runners, hurdlers, and jumpers will have to turn in some impressive efforts to make the regional this year.
The girls sectional will be staged Tuesday, May 14, at Bloomington North, and the boys sectional follows on Thursday, May 16.
Good luck to all county athletes who compete.