UPDATED: Bloomfield Merry-Go-Round auction won by man on a mission to keep it in Bloomfield

UPDATE as of 1 p.m. Thursday: The auction has ended with a high bid of $2,500, placed by Brian Pearson backed by the support of numerous individuals who contributed through a GoFundMe account. Pearson says the Merry-Go-Round stays in Bloomfield. No further information is available at this time. 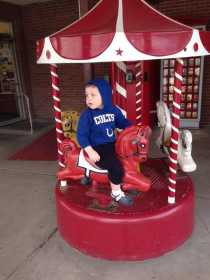 There's good news and bad news in an effort to rescue a Merry-Go-Round off an auction block and keep it in a public place in Bloomfield.

For background information, see previous story on gcdailyworld.com by clicking Man on a mission to save Merry-Go-Round for Bloomfield.

The good news is the community support that Brian Pearson says he's received since he took up the cause and since a story was posted on the Greene County Daily World's website and Facebook page.

As the word spread, the community reacted by pledging contributions to help pay for the Merry-Go-Round, $5, $10, $20 and some pledged $100 or more.

A couple of days ago, the total contributions were a little more than $100.

By around 8 p.m. Wednesday, the total amount of money raised had reached an impressive $1,440.

Pearson said it touched his heart that others saw the value of the Merry-Go-Round and were willing to chip in.

"This is why I love this little town," said Pearson who wanted to thank everyone who made a donation and everyone who helped spread the word.

As people pledged their support and the total grew, Pearson placed appropriate bids on the Merry-Go Round. There was a flurry of bidding on Tuesday, then with Pearson's bid the top bid, it stalled out at $800.

On Wednesday afternoon, a little bidding war began anew and the high bid raised to $900, then $1,000 and it's gone up from there.

So the bad news is that another bidder currently (as of 9 p.m. Wednesday) has placed the high bid of $1,800 and Pearson is about tapped out.

He says he can only bid as high as the amount of contributions in the GoFundMe account plus the cash on hand that he can pledge, and it appears the competing bidder is not backing away and could win the auction.

Pearson says he has not actively solicited help from any business, organization or individual in the Bloomfield area, but if one were to swoop in and pledge a larger amount or even register on the auction site, place a bid and win the auction then keep the Merry-Go-Round in a public place in Bloomfield, he would not be disappointed.

"If they were to keep it somewhere where everyone could enjoy this piece of Bloomfield history, then the money that's been contributed in the GoFundMe account could be used to help pay for the Merry-Go-Round," said Pearson.

To pledge a contribution to the GoFundMe account "Save Bloomfield's Merry-Go-Round," visit http://www.gofundme.com/vbml5s online.

The auction is scheduled to end at 10:30 a.m. on Thursday - at a time when Pearson will be working his normal job and will probably not be able to take calls or place last-minute bids.

Note: For those watching the auction site, the names of bidders show only initials with asteriks so as not to reveal the identity of bidders. Pearson's bids will show up as "S****n" and a competing bidder showing as "B****n" is not Pearson.

Pearson says he would welcome help from anyone in the community who would like to make a donation or has an idea about saving this piece of Bloomfield history.

(Any phone contact with Pearson, due to his employment, should be made Wednesday night or early Thursday morning.)

Comments
View 11 comments
Note: The nature of the Internet makes it impractical for our staff to review every comment. Please note that those who post comments on this website may do so using a screen name, which may or may not reflect a website user's actual name. Readers should be careful not to assign comments to real people who may have names similar to screen names. Refrain from obscenity in your comments, and to keep discussions civil, don't say anything in a way your grandmother would be ashamed to read.
Respond to this story