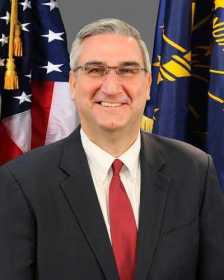 INDIANAPOLIS (AP) — Indiana's governor is ordering restaurants and bars closed to in-person customers in another step toward stemming the spread of the coronavirus.

The order Monday from Gov. Eric Holcomb follows each of Indiana's adjacent states taking the same step in recent days.

The governor's office says 273 public school districts have decided to close to students and that the state education department is working with the 16 others to determine their next steps.

Indiana's hospitals and surgery centers are being asked to cancel or postpone elective and non-urgent surgical procedures to help free up resources and personnel for possible virus illnesses.

THIS IS A BREAKING NEWS UPDATE. AP'S PREVIOUS STORY IS BELOW.

More than two-thirds of Indiana's school districts are closing their doors to students as all public schools in surrounding states have done so in an attempt to slow the coronavirus spread.

The number of confirmed COVID-19 illnesses in Indiana reached 24 on Monday in 13 counties, according to the state health department. That is five more than reported on Sunday and double Friday's number.

The state Department of Education said 218 of Indiana's some 300 public school district have reported closure or switching to online classwork because of the virus outbreak.

Gov. Eric Holcomb last week approved allowing schools to cancel 20 days without having to make them up later but said local school officials should make closing decisions. Statewide school closings are occurring in Michigan, Ohio, Kentucky and Illinois after their governors either ordered the closures or asked schools to do so.

Governors in Illinois, Michigan, Ohio and Kentucky have ordered restaurants and bars to close, but those decisions are being left to the businesses in Indiana. State regulators in Indiana have closed all the state's casinos and off-track betting parlors for at least two weeks.

An employee at the state police laboratory division in Indianapolis has been diagnosed with virus and remained hospitalized, according to state police. One co-worker has been self-quarantined at home and others have been notified.

For most people, the new coronavirus causes only mild or moderate symptoms, such as fever and cough. For some, especially older adults and people with existing health problems, it can cause more severe illness, including pneumonia. According to the World Health Organization, people with mild illness recover in about two weeks, while those with more severe illness may take three to six weeks to recover.

The Associated Press receives support for health and science coverage from the Howard Hughes Medical Institute's Department of Science Education. The AP is solely responsible for all content.