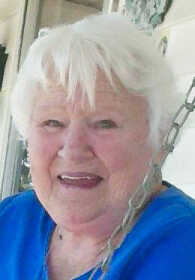 Ruby Kellams, age 92, of Linton, passed away peacefully at 2:15 a.m. on Wednesday, January 18, 2023, at her residence surrounded by her loving family. She was born in Jasonville on May 1, 1930, the daughter of Uriah and Edith (Calihan) Gambill.

She worked at General Electric for 34 years before retiring in 1987. She then worked for Dr. Ben Raney for 16 years as a caregiver. She went to school at Number 9 in Midland. She enjoyed playing Skipbo with her friends, drinking her sweet tea on her porch swing, going to French Lick Casino with her daughter and spending time with her family and friends.

Ruby is survived by her loving daughter, Nina Gaither of Linton; granddaughter, Tammy (Darrin) Gibbon of Cannelton; great-granddaughters, LaTasha (Austin) Bohnert of Linton and Kaylee (Cody) Meadows of Shelburn; great-great-grandchildren, Briana Jones, Wyatt Ball and two on the way as well as several nieces and nephews.

Funeral service will be held at 1 p.m. at Welch & Cornett Funeral Home in Linton on Saturday, January 21, 2023. Burial will follow at Antioch Cemetery in Dugger.

Visitation will be held at the funeral home on Saturday from 11 a.m. until the time of service.

Online condolences may be shared with Ruby’s family at www.welchcornett.com.