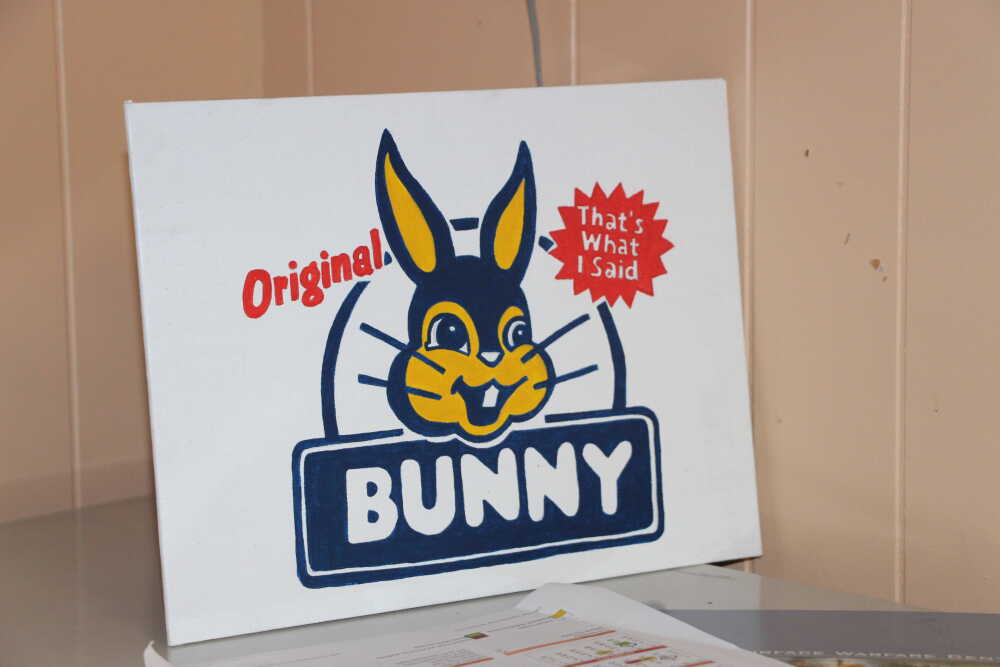 The hand-painted Bunny Bread logo sits on the filing cabinet in my office. Thanks, Rachael!

If you walk in my office, there's a chance you'll notice what seems like a random, hand-painted Bunny Bread advertisement. No, I'm not selling advertising space for my office. Rather, one of my coworkers turned one of my favorite memories of my father into paint and canvas.

I've written about my dad passing away unexpectedly last February. With less than a month until my wedding, I've been missing him more and more. Luckily, I have an amazing stand in (Grandpa Jones) to walk me down the aisle.

On what would've been one year since my dad passed away in February, I was having a rough time. I found an old photo of my dad and I, from when I think we still lived in Missouri. I missed my daddy.

One of my friends/coworkers, Rachael, who you may recognize from the front office here at the GCDW, reached out to talk me during the rough night. She asked what one of the funniest things my dad ever said to me, and I told her of my favorite (albeit random) memory.

When I was a kid, I loved commercials. The short snippets of advertising often included anecdotal descriptions of the products. Even as a small child, my dad said I would get so mad if we watched channels like HBO because there were no commercials. (I'm one of those who only watches the SuperBowl for the commercials.) Apparently, my favorite was the catchy Bunny Bread commercial.

My dad said a lot of off-the-wall and hilarious things, but one interaction has always stuck out. I remember standing in the kitchen and he was in the bedroom at the back part of the house.

I yelled back, "Bunny Bread!"

I remember him laughing so hard, and we spent the rest of his life quoting commercials together.

Rachael came in my office this week with a canvas pressed to her, and said she hoped I remembered telling her the story or this would be really weird. She had spent her free time painting the ad for me to have as a reminder for that silly memory.

I instantly started crying -- happy tears, of course. Thank you, so much. Dad would've loved it, too.

Sabrina is the editor of the Greene County Daily World. She can be reached at westfallgcdw@gmail.com.