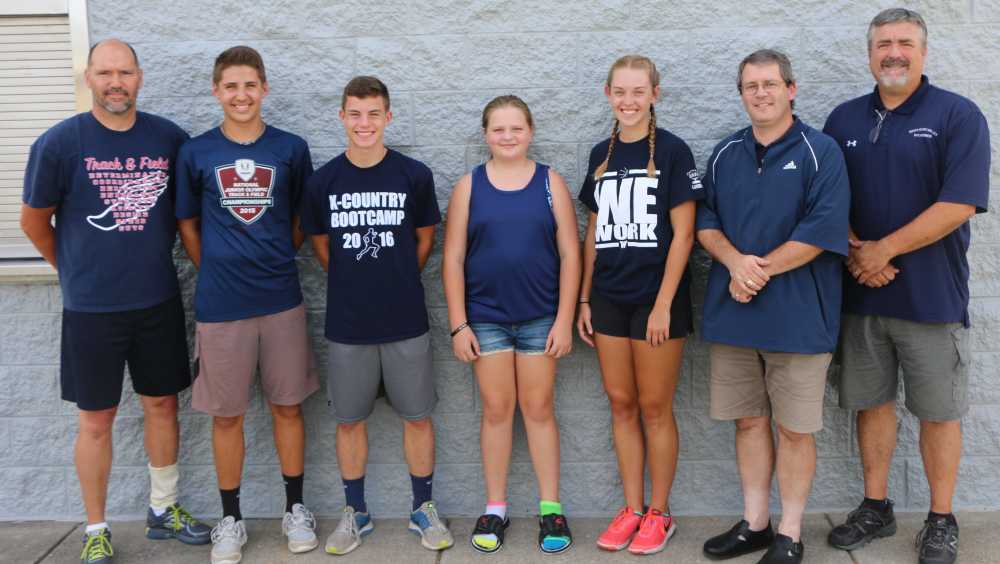 A broken wrist kept White River Valley sophomore Clayton Hoover from competing in the USA Track and Field regionals and, most likely, the Junior Olympics nationals.

Andy Davis, head coach of the WRV Track Club, said Hoover broke his wrist playing basketball and could not compete in the USATF Region 7 championships July 6-9 at Northern Illinois University in DeKalb. Archie Ellett, the club’s throwing coach, said he thinks Hoover would have made it to the nationals fairly easily.

“He was set ... to win it or get second,” Ellett said. “It was unfortunate to break his wrist. He was really looking forward to it.”

Davis said Hoover had been working really hard in the off-season to make it back to the nationals. Two years ago, Hoover placed ninth in the Junior Olympics discus competition. Davis noted the top eight finishers stand on a podium after the event and get red, white, and blue hats and All-American honors. After his ninth-place finish, Ellett said, Hoover “was mad all the way home.

“He’ll move on,” Ellett said. “I told him everything works for a reason and ... something good will come from this.”

The coach added that Hoover has his eyes set on breaking the WRV record for discus, a throw of 172 feet, nine inches made by Ron Provo in 1999. He and Davis said the coaches expect great things of Hoover, who threw the discus farther than any freshman in Indiana this year, and setting a new record may be one of them.

“Clayton has his eyes on that,” Ellett said. “The way he’s progressed, I think he can do it.”

Davis said that Sammy Robbins and Silas Robbins, both of Linton, and Jon Clevenger of WRV qualified for the regional, but could not compete because of other commitments.

Joe also competes in the steeplechase, an event in college track, but not Indiana high school meets. The steeplechase is a 2000 meter race with 21 hurdles and six jumps over a water obstacle. The water obstacle is placed on the inside of the track so the runners have to divert to jump it.

The pit is at least seven to eight feet wide, Joe said. Competitors do not get any penalties for landing in the water. However, the liquid is waist deep in the center of the pit, he said, so the trick is to leap far enough place one foot in the shallow water along the edge and the other on dry ground.

He said he would like to compete in the steeplechase in college. “I’m hoping to,” he said. “It would be really nice.”

“Buddy Davis (a former track standout at WRV) ran it and Joe’s always looked up to Buddy,” said his mother Claire Records.

“Track is a tremendous sport,” Davis said to me when discussing Hoover and the other WRVTC athletes. “All kinds of kids can do it.”

“We’ve done a lot of good things for a small place around here,” Davis said. “We’re made a lot of noise around the state.”

Because of the dreaded deadline pressure I forgot to put in the score of the Greene County Stingrays triangular meet last Saturday. The Stingrays won the meet with 627 points, followed by Marshall, Ill., 512, and South Vermillion, 247.

Kyle Kirchner, coach of the Stingrays told me the swimmers have had a good season with many personal records set. We ran a story about Saturday’s invitational, but didn’t list these personal bests:

Elijah Rodriguez: 53.12 seconds in the 8 and under 25-meter free stroke, the first time he’s been under one minute in that event.

Jaycee Archer: 34.94 in the 8 and under 25-meter breast stroke, another first. I also owe Jaycee an apology for misspelling her name in the first couple of stories I did about the Stingrays.

“It’s nice to see when the kids break their PRs,” Kirchner said.

Kirchner also told me that some swimmers raced in some new events for the first time Tuesday night in the team’s last home meet with South Vermillion. He said the Stingrays start off using the free stroke, then move to the back, breast, and butterfly strokes. When they’ve mastered these they can move on to the individual medley.