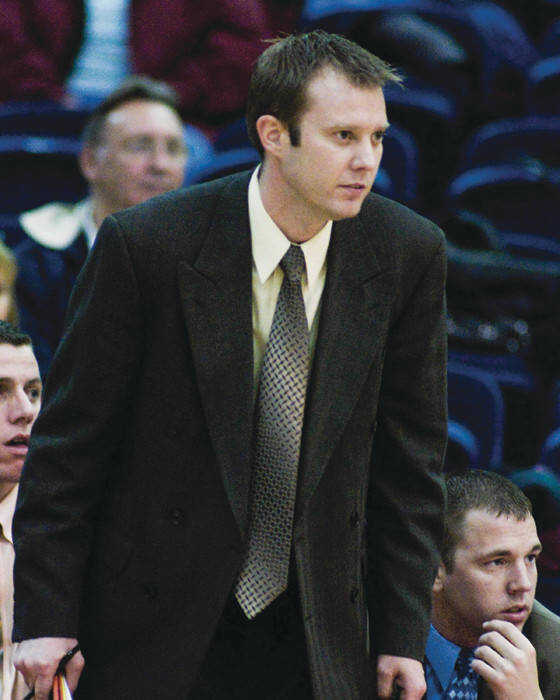 The next few months will bring major changes for Marc Hostetter, and he's looking forward to every minute.

That hasn't been the case the past several years as a college basketball assistant coach.

Hostetter -- a 1993 White River Valley High School graduate -- has given up his job as the University of Southern Indiana's top men's basketball assistant coach to spend more time with his family.

And he couldn't be happier.

"During the season it's every weekend (away from his family), and most Tuesday and Friday nights we don't have a game I'm out watching someone else (at high schools recruiting)," Hostetter told the Greene County Daily World on Wednesday morning. "We have two boys now, and I got to the point that I have to think down the road instead of right now. I'm young enough to make a transition and get out there in the real world."

That real world includes his wife Nikki and their two sons Leo, 5, and Landon who was born in December.

Hostetter, 33, is the son of Kenny and Sherri Hostetter of rural Lyons.

Hostetter began his new career as an agent at the insurance company Freeman, Will, Niemeier & Heston last week.

Hostetter played for USI after leading WRV to the 1993 semistate championship game at Evansville. He helped USI win a Division II National Championship.

Rick Herdes is the current USI head coach, and Hostetter was his first hire when he took over in 2001.

"(Hostetter has) been an integral part of this program for many years and he will be missed badly," Herdes told an Evansville newspaper.

Hostetter finished as USI's all-time leader in assists and helped the team to two National Title game appearances, winning in 1995.

He joined the coaching staff as a student assistant under Bruce Pearl -- now the head coach at the University of Tennessee -- in 1997. He also was an assistant for two seasons at what was then called Longwood College, a Division II school in Virginia. Longwood University, as it is now known, has moved up to Division I.

Hostetter returned to USI as a full-time assistant in 2001.

When Herdes was under consideration for a couple of Division I coaching jobs after the 2006-07 season, Hostetter was a leading candidate to replace him.

"I felt like I had put in the time and had been pretty successful. I thought I would have been a strong candidate," Hostetter said. "I would have went after it as hard as I could at that time. But I don't regret not getting that chance."

If he had, he would have had other major decisions to make.

"When you're green and young, you think you're going to make the SEC or the Big Ten. I would have to entertain Division 1 assistant jobs and moved to different areas. We got really attached to the city of Evansville and really attached to USI. I've spent most of my adult life here."

Hostetter won't rule out returning to coaching some day, and you can bet he won't get out of it totally even now. His sons will probably get a lesson or two soon.

More from this blogger · Chris Pruett
Comments
View 6 comments
Note: The nature of the Internet makes it impractical for our staff to review every comment. Please note that those who post comments on this website may do so using a screen name, which may or may not reflect a website user's actual name. Readers should be careful not to assign comments to real people who may have names similar to screen names. Refrain from obscenity in your comments, and to keep discussions civil, don't say anything in a way your grandmother would be ashamed to read.
Respond to this blog