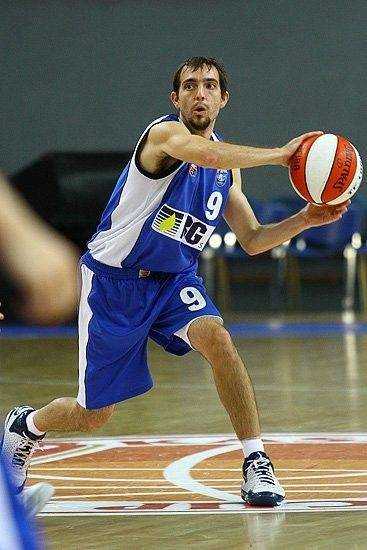 When A.J. Graves graduated from Butler University in 2008, he had a feeling his competitive basketball career was over.

He figured he would play in a league or two during the winter, but as far as a professional career, he thought that was out of the question after taking part in some National Basketball Association camps.

But a year away from the game and working full-time, he had the itch. The itch to play again.

So he hired an agent, and a few months later, he's now playing professionally in Poznan, Poland.

He's a member of the PBG Basket Poznan team in the Polska Liga Koszykowki league.

"It's the top league in Poland," Graves wrote in an e-mail.

"I signed a contract for August 17 to September 21, with a possible extension until May 15," Graves explained. "So basically I arrived in Poznan on August 17 as part of the team for a five-week tryout ... this included conditioning, training camp, and preseason games.

"The coach and the president of the organization were happy with my play and extended my contract until May 15."

As of Oct. 8, PBG Basket Poznan had played 10 preseason games and had an 8-2 record.

In the regular-season opener Graves played 22 minutes and scored two points on two free throws, and had three assists.

During the preseason Graves said he averaged between 20 and 25 minutes a game.

Graves is thrilled to be playing basketball again.

"A year ago, I thought I had life figured out. I was completely mistaken. I wanted to walk away from the sport knowing that I could have played pro if I had chosen to. However, as the months passed by, I realized that the 'not knowing' was driving me crazy," Graves explained.

"I made up my mind to pursue this dream. It's almost surreal to think that I gave up the sport ... then found it again with a renewed and different perspective that has allowed me to appreciate the skills that I have acquired over the years and the experiences I have enjoyed because of playing basketball."

Graves said the competition level is high in the Polish league.

"There are a few ex-NBA players, as well as some great players that I played against in the NCAA," he said.

Graves said he has matured a lot since his college days.

"I believe it takes maturity to be able to train, practice, and perform at the pro level because you can't have bad days. You can't sulk or be down on yourself for too long because the next guy will take your place," Graves explained. "This is a business, you might get fired. ... It's physically demanding, especially for a guy my size, and if you aren't motivated every morning to play at your highest level, then you will get left in the dust and your career could be over."

Graves didn't care where he started his pro career, as long as he was playing basketball.

"I just knew that I wanted to play pro ball at any cost. However, once I stepped off that plane ... reality quickly sat in that I was halfway around the world and this wasn't Kansas or Indiana anymore," Graves recalled. "The people here are very friendly and treat Americans with respect just as they treat their own citizens. However, that doesn't mean I can communicate with them well.

"It's hit and miss whether I find a person who speaks or understands English. ... I can't eat out unless I'm with someone who can help me translate the menu. The grocery store is tough because all the labels are in Polish. I have to go by the pictures on the boxes or cartons. The instructions are obviously in Polish so I have to rely on my intuition from college on how to cook certain things. ... Ice is scarce, drying machines (laundry) do not exist, the metric system is used, refills on drinks cost money, and the list goes on and on. ... Sometimes, I just have to smile and laugh."

The bottom line for Graves is that he needs to know if he's good enough to play professional basketball.

"When I look back on my life, I will feel satisfaction knowing that I took on a challenge that many people, including myself, thought that I couldn't conquer. I will know for sure whether or not I was good enough for pro ball. And regardless if I succeed or fail, I will have came home (Switz City) with a life experience that has taught me to appreciate where I came from and the blessings that were bestowed upon me."

More from this blogger · Chris Pruett
Comments
View 13 comments
Note: The nature of the Internet makes it impractical for our staff to review every comment. Please note that those who post comments on this website may do so using a screen name, which may or may not reflect a website user's actual name. Readers should be careful not to assign comments to real people who may have names similar to screen names. Refrain from obscenity in your comments, and to keep discussions civil, don't say anything in a way your grandmother would be ashamed to read.
Respond to this blog