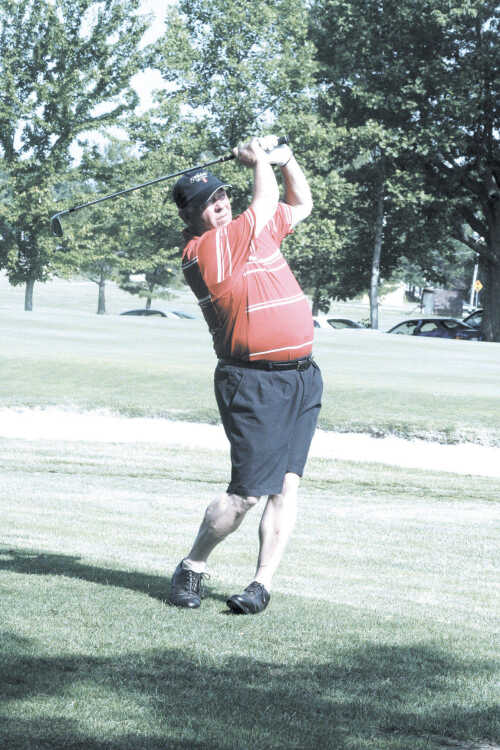 The Tom Jones Memorial Scholarship Golf Tournament will be Sunday at the Phil Harris Golf Course. Jones (above) loved golf, and won the Greene County Open six times. Money from the event will be used for scholarships to Linton-Stockton High School seniors. (GCDW file photo)

If the late Tom Jones wasn't working for the city of Linton as mayor or spending time with his family, there was a pretty good chance you could find him at the Phil Harris Golf Course.

He loved playing golf, and he was an outstanding player. Jones won six Greene County Open titles, his last coming in 2001.

Jones passed away this past March, and to help keep his memory alive the Tom Jones Memorial Scholarship Fund was established. Money from the event will help fund scholarships for Linton-Stockton High School seniors.

"Tom was definitely an asset for us out at the golf course, no question about that," Phil Harris Pro Bart Beard said. "Not just there, but everywhere.

"The turnout we're starting to see, and the items people are giving us to give away to help the scholarship fund, it's a tribute to the kind of person he was."

The event is scheduled for Sunday. Lunch will begin at 11:30 a.m., followed by a shotgun start at 1 p.m.

Brooke French, an employee and organizer of many events at the course, said entry fee is $25 plus cart and greens fee.

She added that Sunday was picked because all of Jones' daughters could be in attendance.

Beard said he wouldn't be surprised if up to 25 foursomes took part.

"I know we've got four or five teams who aren't from around here who are already signed up."

Beard and French both noted that mayors from other cities are expected to show up and offer their support.

Jones' wife and current mayor Patti Jones said Tom would be pleased with the tournament.

"(The tournament) makes me feel very good," Patti said Tuesday morning. "He'll be looking down and watching his friends play his favorite game."

The memorial scholarship will take the place of the mayor's scholarship that has been presented since the late mayor took office.

"I just hope to see all of his friends out there to play a round of golf for Tom," Patti said.

"When he passed away in the spring, I had a couple of people approach me about it then. I was honored that they wanted to do that for him. I'll put it in the scholarship fund and it will go for a good cause. Outside of family, golf and community, kids were right up there with him."

The scholarship will be awarded to an all-around student.

"It will go to a person who shows leadership skills, who is civic-minded ... someone who does a lot of community work. A good, well-rounded student," Jones explained.

Sunday's event will have a level playing field, Beard stressed. There will be hole prizes, but the overall winners will be determined at random.

"Winners are going to be drawn out," Beard said.

"We want people to come out and enjoy themselves and it doesn't matter if you've got a good team or bad team."

You can sign up at the pro shop or by calling 847-4790. Beard suggests signing up before Sunday, though you can sign up that day if needed.

"But we only have so many carts ... I'd like for them to sign up early. That way if we do need more carts we can make other arrangements."

More from this blogger · Chris Pruett
Comments
View 3 comments
Note: The nature of the Internet makes it impractical for our staff to review every comment. Please note that those who post comments on this website may do so using a screen name, which may or may not reflect a website user's actual name. Readers should be careful not to assign comments to real people who may have names similar to screen names. Refrain from obscenity in your comments, and to keep discussions civil, don't say anything in a way your grandmother would be ashamed to read.
Respond to this blog