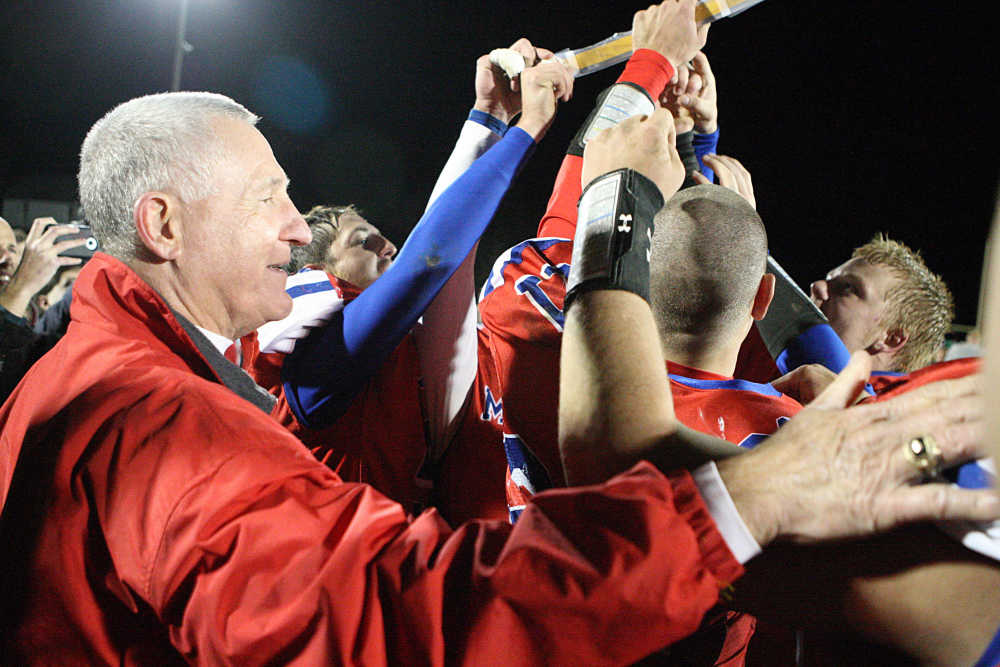 Linton-Stockton High School Atheltic Director Charlie Karazsia has been a long-standing Miner Football fan. He began his career with the Miners on the sidelinees as a coach in 1980. (Courtesy photo)

If you're not from Linton or Greene County, you may not understand how important Linton-Stockton High School football is to the school and community.

Ted Bishop remembers his first impression of Miner football when he arrived on the scene as the pro at Phil Harris Golf Course. The Logansport native was amazed at how a program at a small school could captivate a community.

"The whole community was engaged. I remember watching the fans roam the sidelines and I had never seen that before. At Logansport, where I grew up, everybody had to sit in the bleachers," Bishop recalled of his first visit to Roy Williams Field in 1976. "It was always hilarious when Linton played on the road and the opposing athletic directors would be trying to tell Miner fans to sit down. That never happened.

"I remember that Linton-Dugger game (1986) ... at Linton. Must have been 10,000 fans at Roy Williams Field. I always used to joke that burglars could have made a killing that night in Linton and Dugger because no one was at home. They were all at the football game. Back then Linton was rare because football was a bigger sport than basketball and that was a rarity in Indiana."

Bishop is now the director of golf at the Legends of Indiana in Franklin, and the former president of the PGA of America. He also kept the offensive stats for the Miners for 10 years.

Linton fans won't have the pleasure of roaming the sidelines of the next game, but that won't be an issue. Fans will gladly sit in their seats at Lucas Oil Stadium on Friday as they watch their beloved Miners (13-1) face Lafayette Central Catholic (14-0) for the Class A state championship in Indianapolis.

One of the key figures in helping build Miner Pride is current athletic director Charlie Karazsia. He was the head coach from 1980-91 and compiled an 84-36 record, which ranks him No. 3 on the all-time Linton wins list. Steve Weber, the current coach at Bedford North Lawrence, is first and Gerald "Two Penny" Landis is No. 2.

Karazsia, a member of the Indiana Football Hall of Fame, came to Linton in 1976 as an assistant under Dan Galbraith. The coach before Galbraith was Randy Lynch. That trio helped put Linton back on the football map, and the Miner steamroller has been going strong since.

"We finally got some money from the school to improve our facilities, clean up the locker room, modify the weight room, better equipment, etc.," Karazsia recalled of those early years. "We instilled the phrase Miner Pride and tried to change the climate towards football.

"Consistency and stability are important ingredients. People have to be committed to improve. People included here are the coaches, players, families, community and school administration. It takes years to get this in place."

Bryan Slay was a senior on the first Linton semistate team in 1986. The Miners lost 14-6 to eventual state champion South Putnam at Roy Williams Field.

He now lives in a western suburb of Chicago with his wife Cheryl and little girl Maci, and makes it to as many games as he can. He always watches when the games are live streamed.

He was there Friday night as the Miners knocked off North Vermillion 56-27 to win their first semistate title.

"A very exciting season. It's been great to see such a great group of coaches and players and to see them finally make the state championship game," Slay said. "This is special, they can do it. It was important for me to be there in person because a large crowd can change how a game is played.

"The players can feel the excitement from the crowd and it's important for coaches and players to have people there to cheer them on."

The Miners lost their previous eight semistate games prior to this past Friday night. Slay, an all-state split end who also played in the defensive backfield, remembers how he felt after losing to South Putnam.

"(The) South Putnam loss hurt bad and it carried over into basketball season which I didn't put much effort in that season," Slay admitted. "I could have been real hard to stop. The community hurt as well. It was a devastating loss."

Slay remembers how the school and community reacted the week of the program's first semistate appearance. He predicts it will be even better this week.

"All week we couldn't wait for Friday's game and the whole town was excited. There was so much talk about going to the Hoosier Dome," Slay recalled. "We probably didn't concentrate on that game like we should have."

Darren Clayton, a 1985 Linton graduate and teacher at the school for 19 years, has been associated with the football program since the early 1990s when he started keeping statistics for the team. He also covers the games for radio station WQTY.

Clayton is thrilled for the football program and community.

"Some people say it's heart, some people say it's the closeness of the players, some say it's more talent," Clayton said of the reason why this year's team has made it to the state title game. "The other teams that have made it this far have had those things too. Maybe this team just has each to a little higher degree.

"The support showed by the community to the football program since the mid '80s is second to none. To reward this rabid fan base with this win and an opportunity that has been talked about for years is phenomenal. It will keep everyone happy and talking for years to come."

Karazsia says competition among the Linton teams throughout the years has helped build Miner Pride.

"Absolutely. Competition between teams is very important. You always want to contribute more than the previous team. That is why it is hard to pick the best team, best player, best coach, etc.," Karazsia said. "Coach (Brian) Oliver stated it perfectly, he said that it takes the perfect combination between skill, talent and especially luck. This year's team proved that."

Karazsia was emotional after Friday's win.

"I have been associated with Linton football for 39 years. When I presented the team the semistate plate, Kathy (his wife) told me that I seemed to be a little emotional," Karazsia explained. "As everyone knows I have no feelings, LOL. The realization of knowing that we were going to Lucas Oil caught up with me. It did take a few moments to settle myself down because I thought of all of the former players that hurt over the years."

Bishop is still amazed at how much Linton football means to this community.

"Even back in '76 I heard tales of that Miner team back in the 1950s that was the mythical state champion because they beat Whiting, who was supposedly the other great team in Indiana. Football defines the culture in Linton ... blue collar, tough, no excuses," Bishop said. "Look at it from a historical standpoint. Linton football just keeps on going at a high level and it has now for damned near 70 years.

"All of the coaches and players are treated like heroes. I loved it when players on my high school golf team were some of the best players on the football team, like Chad House and Derek Bradbury. That told me that I was doing something right because I had the best athletes playing golf in the spring."

Karazsia is happy so many people will get to experience the thrill of playing or watching their Miners in a state championship game.

"I just want to thank the countless number of coaches, players, fans, and administrators that have influenced me. I love having those big games on Roy Williams Field. I speak to former players weekly and they all have that special moment playing for the Miners," Karazsia said.

"I too will find it very difficult to control my emotions when we run out on Lucas Oil field, but the buttons on my shirt will be busting with pride for this team."

Chris is the publisher for the Greene County Daily World. He can be reached by email at cpruett79@gmail.com or by telephone at (812) 847-4487.